Books, documentaries, pamphlets, reorganization strategies and so on have been written about development aid from donor countries and its effectiveness. A simplistic, but often held view is that it is not very effective at achieving fundamental goals, but is better than nothing. Indeed, the amount of development aid per capita, in terms of donors and recipients has risen dramatically over the last 30 years – using 1975 as the approximate end of the direct colonial period with the independence of most Portuguese colonies – and small but perceptible increases in human well being have been seen in least developed countries (those who rely the most on aid).

The following chart illustrates total development aid flows from all donors to “Least Developed Countries”, or those countries who have a human development index of less than 0.5, using constant 2007 US dollars, on a per capita basis. 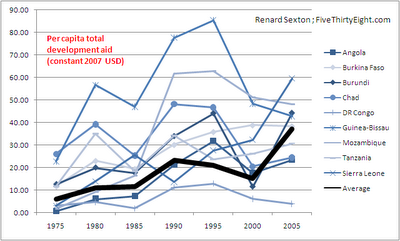 The large increases in total aid flows have resulted from several trends: First, more donors are present, as oil-rich middle eastern states and others have since the 1980s begun to provide a significant portion of development aid. Second, OECD countries have increased both in number and in disbursals. Large disparity occurs between countries in terms of per capita aid, however, largely driven by high-profile events such as conflicts, natural disasters, and political commitments to domestic populations by former colonial powers.

Since independence and decolonization, and assisted by development aid and strengthening of domestic economies and social systems, the least developed countries (LDC) have made slow but steady progress toward human development*. (Legend for chart here) 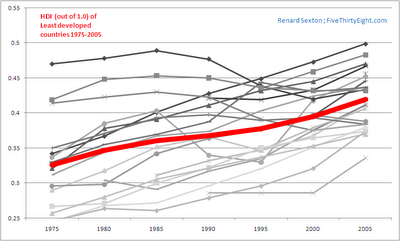 From Senegal at the top of the group to Sierra Leone at the bottom, income, health and education indicators — in part linked with the UN’s Millenium Development Goals — have improved. Cases of famine, civil war, economic turmoil and so forth have stalled or caused declines in many countries however, resetting the development path, such as in Rwanda, DR Congo or Chad. In the larger realm, however, the small advances that have occurred have been quite small. Between 1975 and 2005, HDI in least developed countries has increased at a rate of about 0.028 points per ten years. In other words, if the developed world were held stagnant at 0.95 (about the current level of Spain or the U.S.), it would take about 188 years for the least developed world to catch up. 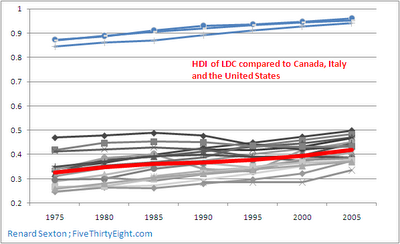 As we intuitively know, 30 or 40 dollars of extra spending per person, particularly when spent in part on functions not directly linked to human development (such as importing specialized equipment, food aid, and consultants from developed countries), is simply not enough to make a serious dent in the problem. However, it is sobering to recognize that the lack of progress is so stark.

Building in part on the storyline of my last post, let’s have a quick look at where G7 spending is actually going. 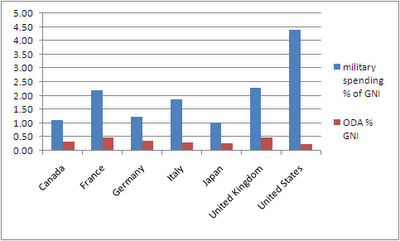 As long as the priorities are set as such, the trends are certain to continue.

*The Human Development Index, developed by the Pakistani economist Mahbub ul Haq, and includes income, education, and health as the key indicators of total human development.