A thinly-veiled and loosely concerted campaign by the Democratic National Committee and the Obama Administration to turn radio host Rush Limbaugh into the Republican Party’s unofficial leader seems to have worked.

In March, following Limbaugh’s CPAC speech in Washington, it was hard to turn on the television without seeing top Republican leaders squirm in response to questions about Rush’s influence on the party. And now comes a new Gallup poll showing that Limbaugh tops the list–not only among Democrats, but Republicans and all national adults surveyed–as the figure identified as “the main person speaking for the Republican Party today.” 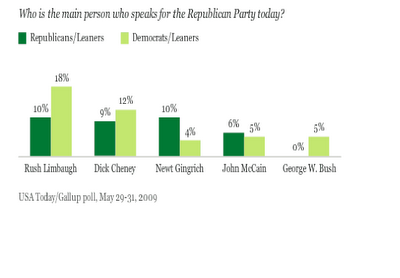 The share citing Limbaugh is not that high: 18 percent among Democrats, 10 percent among Republicans (tied with Newt Gingrich), and 13 percent overall. But the question was open-ended, which means respondents volunteered Limbaugh’s name. Former vice president Dick Cheney and former Speaker Newt Gingrich also received a significant share of responses.

A less charitable reading of these results is that the leadership vacuum for the GOP is so profound right now that Limbaugh was going to make some minimal showing no matter what and, of course, Democrats have a self-interested reason to cite Limbaugh; a more charitable view is that at least no self-identified Republicans/Republican leaners cited George W. Bush as their party’s leader, and a solid 17 percent of them responded “no one.” 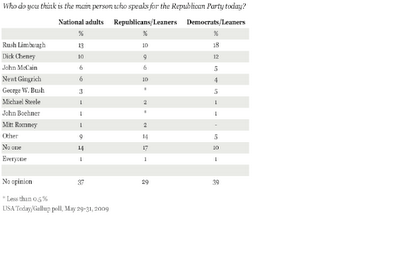 Almost half of those who identify with or lean toward the GOP cannot think of a single political or other figure when asked to name the main person who speaks for their party. And none of the three individuals whom Republicans name — Limbaugh, Cheney, and Gingrich — would likely be characterized as new visionaries or individuals bringing a fresh or new face to the Republican political scene. None of the three hold elective office at this time, all are older white males (the youngest of the three is Limbaugh, who is 58), and only one has a realistic chance of running for the presidency in the future (Gingrich).

Perhaps most importantly, none of these is mentioned by more than 10% of Republicans, a telling indication that rank-and-file Republicans today simply have no single consensus leader around whom they can gather their forces.

After the midterm elections, when the battle for the 2012 Republican presidential nomination and arguments about the future of the GOP thus get more fully underway, this will change. But for now, the DNC and Obama administration have succeeded in elevating Limbaugh’s status.