Stan Wawrinka is two wins from accomplishing what few have before in modern tennis history: capturing a second Grand Slam title after winning the first in his late 20s.

Last January, two months before he turned 29, Wawrinka beat three top-seven players in succession to win the Australian Open. He’d never before won a Grand Slam title. He’d never even made a final. He’d beaten top-seven players just three times before at major tournaments — in 18 tries. His win in the final in Melbourne last year came against an injured Rafael Nadal. He failed to reach the semifinal of any subsequent Grand Slam tournament for the rest of 2014.

But Wawrinka has looked a lot less fluky this year in Melbourne. He has advanced to a semifinal meeting Friday with No. 1 Novak Djokovic, whom he upset last year. If Wawrinka can repeat that feat, he’ll play the final against either Andy Murray or Tomas Berdych — two opponents who haven’t beaten him over seven matches going back to April 2013.

Since 1968, the year when the majors opened up to professional players, it’s been rare for any man or woman to win a first singles Grand Slam title past age 28. It’s been rarer for any of them to win a second. Four men and four women were older than Wawrinka when they broke through at a major, according to data provided by Jeff Sackmann of Tennis Abstract: Goran Ivanisevic, Petr Korda, Andres Gomez, Andres Gimeno, Kerry Reid, Jana Novotna, Francesca Schiavone and Li Na. Collectively, they reached just three more major finals and won just one follow-up Slam: Li’s, at the Australian Open last year. Schiavone and Wawrinka are the only ones among them who are still active. 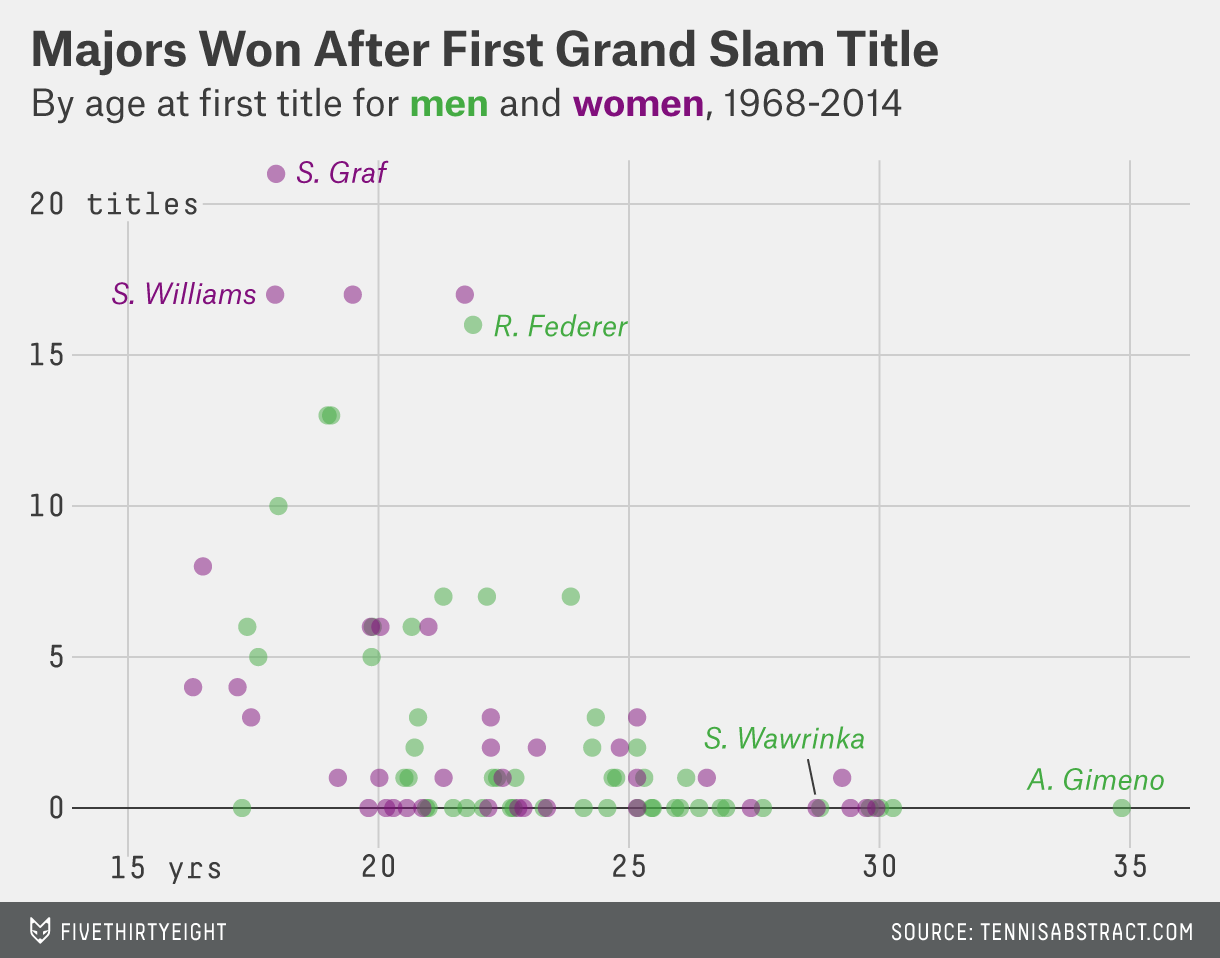 One factor works in Wawrinka’s favor: Players are sticking around at the top of the sport longer than they used to, in both men’s and women’s tennis. It’s no anomaly that it was only last year that Li became the first Open-era player who won a first singles Slam at 29 or older to follow it up with a second major title.

The other men’s semifinalists — Djokovic, Murray, Berdych — are at least 27 years and 8 months old. Djokovic has spent the majority of his time at world No. 1 after turning 25. Murray has won both of his major titles since turning 25. If Berdych wins the title, he’ll have his first Grand Slam championship, he’ll reach a new career high ranking of No. 3 in the world — and, like Wawrinka, he’ll then try to show he’s no fluke but just a late bloomer in an aging sport.

Women’s tennis players’ peaks also have gotten later in their careers, though about a year or two before men’s. (That’s based on peak rankings and average age of winning major titles for the first time.) The women’s semis feature the world’s two top players — 33-year-old Serena Williams and 27-year-old Maria Sharapova — and two younger women trying to reach their first major final: 26-year-old Ekaterina Makarova and 19-year-old Madison Keys. If Keys wins, she’ll be the first teenage man or woman to win a major since Sharapova at the 2006 U.S. Open. If Makarova wins, she’ll be where Wawrinka is now, trying to back up a late-20s breakthrough. Among multiple-Slam women winners, only Li was older when winning her first. One promising sign for Makarova: Like many peers on tour these days, she’s playing her best tennis after 25.

Correction (Jan. 28, 9:30 p.m.): An earlier version of a chart in this article showed that Serena Williams won her first Grand Slam title at age 22. She won it two weeks before her 18th birthday.

Correction (Jan. 29, 6:58 a.m.): An earlier version of this article incorrectly said Francesca Schiavone is no longer an active player.