In fact, it isn’t for Louisiana at all, which has phased out the system for federal races. But the practice was recently adopted by Washington State. And if a State Senator from San Luis Obispo gets his way, it might be implemented in California, which will vote on a ballot measure on the jungle primary in 2010.

So what, you’re probably asking, is a jungle primary? And what does all of this have to do with Joe Lieberman?

A jungle primary — political scientists prefer the term “nonpartisan blanket primary” — is one in which all candidates from all parties appear together on the same primary ballot. The top two finishers, regardless of party, then advance to a run-off election, which is held at the usual date in November. (In some iterations, although not California’s, this second step can be circumvented if one candidate receives an outright majority of the vote on her first try).

One of the obvious, if often ofterlooked reasons that our government tends to be so partisan is because of the primary system. The optimum ideological position to hold in order to win one’s primary is quite a bit different from the theoretically optimal one for the general election — quite a bit left of the median voter if you’re a Democrat, and quite a bit to the right if you’re a Republican.

We can give life to this result, if we like, by means of a simple simulation. Suppose that the voters in a state are arranged from 1 to 100, with 1 representing the most liberal voter and 100 the most conservative one. The distribution of voters, we will assume, is spread evenly throughout this spectrum. We will also assume that the state is somewhat asymmetrical in its partisan orientation — as is California toward the Democrats. Voters 1 through 60 are Democrats, and 61 through 100 are Republicans.

Suppose that two candidates are nominated from each party, with each party holding a closed primary. The candidates are selected randomly from within some point in their party’s ideological space. We then assign each voter to find her best ideological match. If there’s a liberal Democrat at space 10 and a conservative one at space 50, we assume that the voter at space 20 will pick the candidate at 10, who is slightly closer to her ideological preferences. Then, we pit the winner of each primary off of one another, with the entire state undergoing the same exercise.

If we simulate this process thousands of times, and assign the winning candidate from each simulation to her space on the ideological spectrum, we get a result that looks like this: 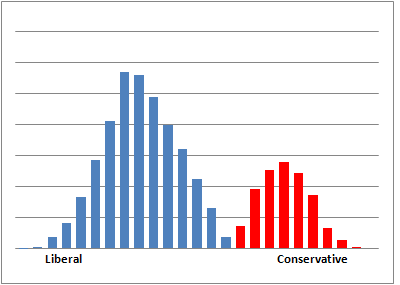 That is, we get sort of a camel hump distribution, with one hump peaking just slightly to the right of the median Democratic voter, and the other just slightly to the left of the median Republican. There’s almost no hope for candidates on the ideological extremes — they’ll have a lot of trouble winning the general election, unless the other party nominates a candidate who is even more extreme. But ironically, life is also not so good for candidates in the middle. A centrist Democrat will usually be defeated by a more liberal one in her primary, likewise, a centrist Republican is vulnerable to being primaried by a conservative.

This happens to give a nice little bonus, by the way, to whichever party happens to occupy the majority of the electorate. This is because the median voter in the majority party’s ideological space will be closer to the center of her state’s electorate than the median voter amongst the minority party. Therefore, the majority party will tend to nominate a candidate who is more acceptable to the state as a whole; in our simulation, for instance, a party with roughly a 60/40 advantage in voter affiliation will wind up winning the general election almost 75 percent of the time. If the minority party is not careful, in fact, it may go into a death spiral, nominating ever-more extreme candidates thanks to the primary process and alienating the voters in the middle that it is supposed to be appealing to.

But now suppose instead that the state holds a jungle primary. Four candidates are picked at random throughout the ideological space (from 1 to 100), without regard to party; each voter then picks the one alternative closest to her. The top two candidates advance to the run-off, and the voters pick again. The distribution of winners using that process looks more like this: 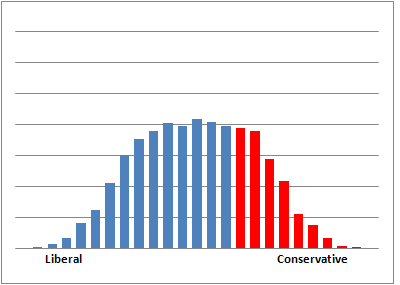 This is not quite a bell curve — it’s more like a bell curve with a buzzcut — but the salient feature is that it’s now all about the candidates in the middle of the political spectrum, the very candidates who were having trouble winning their partisan primaries before. If every state had a jungle primary, we’d have a Senate full of Susan Collinses — and Joe Liebermans. (Or think of all the weird candidates that tend to come out of Louisiana — very conservative Democrats like Mary Landrieu and very moderate Republicans like Joseph Cao).

This jungle primary also turns out not to be quite as favorable of an outcome to the majority party; a Democratic candidate won about 70 percent of the simulations using the jungle primary versus 75 percent under the traditional system. Moreover, the Democrats who did win tended on average to be more conservative (although the Republican winners were likewise more moderate). It’s not a surprise, then, that the legislator who was pushing this proposal in California was Abel Maldonado, a Republican.

The jungle primary system does theoretically benefit the voter: a random voter in a random election will, on the average, wind up with a candidate slightly closer to her ideological preferences under the jungle system than she would have under partisan primaries.

But the measure, I’d guess, will not pass in 2010. The California Democratic Party has ample reason to oppose it. And some Republican higher-ups might come out in opposition too, since the jungle system tends to reduce the importance of parties, period. Partisans like parties: there’s something they can actually agree upon. And here’s something else: nobody wants to live in the land of a thousand Liebermans.