I covered a lot of this ground in a post a couple of weeks ago, but it’s worth going over again as some of the usual suspects are alleging that the Democratic caucus has “scammed” their constituents out of a public option. 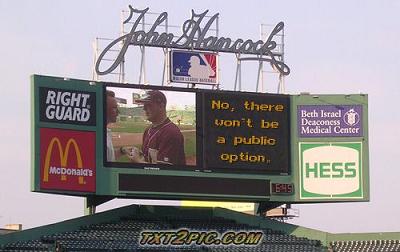 1. No, it isn’t clear that the Democrats ever had 50 votes for the public option in the Senate. A couple of people have cited this list by Jane Hamsher, but that list interprets several ambiguous statements as yesses, includes some purported yes votes who actually voted against the public option in committee, and includes others (like Jay Rockefeller) who have said they support the public option, but not through the reconciliation process. A newer, fresher whip count on Senators who support including a public option in a reconciliation bill is now at 41 votes — which reflects a lot of progress but obviously remains somewhat short of a majority.

2. It’s also not clear that anyone connected with the Democratic leadership ever actually said (before Scott Brown was elected) that the public option had 50 votes in the Senate (but fewer than 60). Until Glenn Greenwald, et. al. can actually provide a link to someone who made a statement like this to the press (it wouldn’t surprise me if they can, but they haven’t yet), they’re basically arguing against a strawman.

3. It’s further unclear clear that the public option currently has the votes in the House. Obviously it did at one point, since a bill passed the chamber in November with a public option included. But that bill was passed with only two votes to spare, and there has since been attrition in the Democratic caucus. In addition, with several members of the Stupak block likely to switch their votes from yes to no, Nancy Pelosi will have to recruit several new members to replace them. With the lone exception of Dennis Kucinich, the only available targets are those who opposed the bill from the right.

4. Having said all that, it’s also not clear that the public option doesn’t have the votes, since a lot of Congressmen have uncommitted or ambiguous positions. My sense is that the votes probably could be whipped in the Senate, but that the House would be problematic depending on the size of the Stupak block.

5. The various comments made by Pelosi, Durbin, et. al. are indeed pretty lame and circular, but probably reflect something like the following:

Pelosi and Durbin/Reid aren’t certain whether the public option has the votes or not. What they’re not about to do is spend a lot of time whipping for it when (a) health care is a heavy enough lift as is; (b) there’s only downside in terms of the vote-counting, since only Kucinich opposed the bill from the left whereas 38 Democrats did from the right, and (c) there’s arguably as much political downside as upside, since even though the public option as narrowly construed is popular, it also makes the bill identifiably more “liberal” at a time when Democrats are trying (with some success, in fact) to frame both the process and the substance of the bill as bipartisan and moderate.

You can certainly argue that Pelosi has made the wrong calculation — and you can certainly argue that she should be offering a more robust and honest assessment of her calculation to the public, since the people who care about this stuff are über-high information voters who quickly parse through bullshit. But it also isn’t just a matter of willpower. A full-throttle effort to whip votes for the public option might succeed, or it might fail. The leadership has decided that it would invite too much trouble to find out.