Play around with one of the ubiquitous ‘swingometers’ that purport to forecast the number of seats in the House of Commons that will change hands pending the results of the United Kingdom’s May 6th election, and you’ll get the impression that the Labour party, which now controls Parliament, has a fairly large buffer zone before facing total Armageddon. According to BBC’s calculator, for instance, an outcome of Conservatives 33 percent, the center-left Liberal Democrats 30 percent, and Labour 28 percent would still leave Labour with a plurality of 276 seats, although far short of the 326 they’d need to achieve a majority and avoid a hung parliament.

But these forecasts are based on a questionable assumption and may understate, perhaps substantially, the magnitude of gains that might be realized by the Tories and by the LibDems. In particular, they are based on the idea of a uniform national swing, i.e., that if Labour finishes 7 points below their standing from the previous election in 2005, their share of the vote will drop by 7 points in each individual district (better known as ‘constituencies’ in the U.K.).

The uniform swing has its proponents, and it has the virtue of being fairly easy to calculate. But, most recent elections in the United Kingdom have not been all that dramatic, with fairly minor shifts in the vote between Labour and Conservatives. The last time that there was something resembling a ‘wave’ election — in 1997 when Labour, under Tony Blair, leaped forward from 34 percent of the vote to 43 — the uniform swing would have underestimated their gains by about 25 seats, and underestimated Conservatives’ losses by 40. And that election did not feature — as this one does — a third party like the Liberal Democrats who were polling right in line with, and often ahead of, the other two.

In addition, when pressed to its extremes, the uniform swing can sometimes produce results that are manifestly illogical. If, for instance, Labour were to lose 100 percent of its vote, some versions of the uniform swing still have them keeping several seats in the Parliament, or perhaps even several dozen, depending on who that vote is distributed to. Likewise, the uniform swing posits that a party can receive negative votes in some constituencies. For instance, if a party suffers from a uniform swing of minus 10 points, what happens in a constituency where they only had 8 percent of the vote to begin with?

I’ve designed an alternative approach which, while also based on fairly simple assumptions, is potentially more robust. The approach works by assigning shares of one party’s 2005 vote to another. For instance, what happens if 10 percent of people who voted for Labour in 2005 defect to the Conservatives, 15 percent of Labour’s voters defect to LibDems, and 10 percent of the Conservatives’ voters defect to LibDems? Under uniform swing, Labour retains 254 seats, but under our alternative approach, they’re left with just 218 instead: 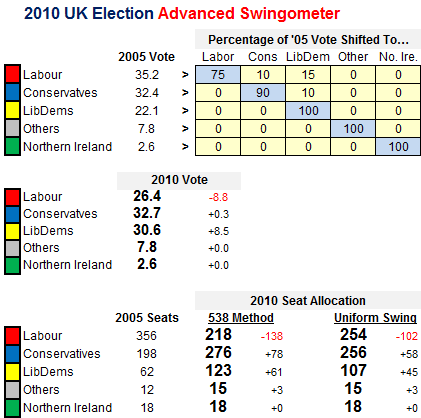 A couple of notes before we proceed: the constituency boundaries in the UK have changed slightly since the last election; the model uses ‘notional’ results based on how the 2005 election would have looked given 2010 boundaries. Also, there are well more than a dozen minor and regional ‘fourth parties’ within the United Kingdom. The model classifies them into two groups — one for minor parties based on the island of Great Britain and another for those in Northern Ireland (where the major parties have almost no presence) — although it does not aggregate their results; instead, it distributes any vote shift proportionally among the minor parties depending in their share of the vote in a particular constituency in 2005.

With that out of the way, let’s test some other scenarios. Here, for instance, is what we get if we create a reasonable allocation that roughly matches the current polling average, which shows Conservatives at 34.0 percent, LibDems at 29.1, and Labour at 26.9: 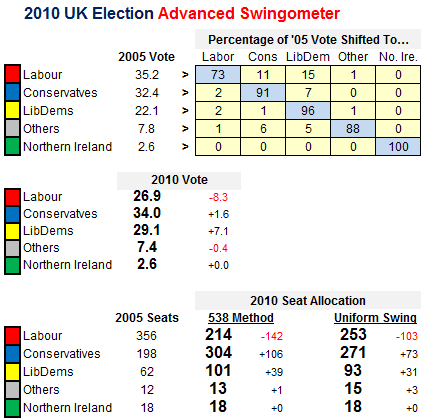 This projects a loss of roughly 40 more Labour seats than uniform swing would assume, with most of the gains had by the Conservatives, who would be within striking distance of the 326 seats they’d need to claim an outright majority. 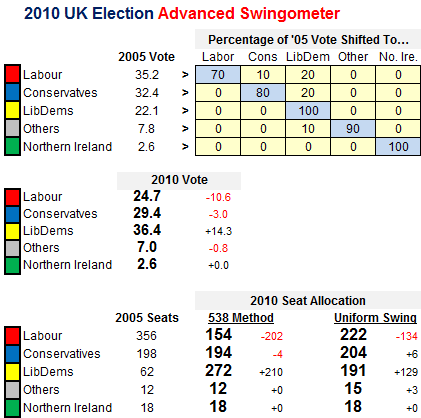 Here, we show LibDems with 274 seats, versus just 191 under uniform swing. They would be the largest party, although quite a bit short of majority status.

What if the Conservatives do really well instead? (There is some notion that pre-election polls tend to underestimate Conservatives’ standing, although I have not investigated this myself). If, for example, conservatives were to get about 37 percent of the vote with Labour and LibDems both between 26-27, our model shows them in control of Parliament with 333 seats, whereas uniform swing gives them only 304. 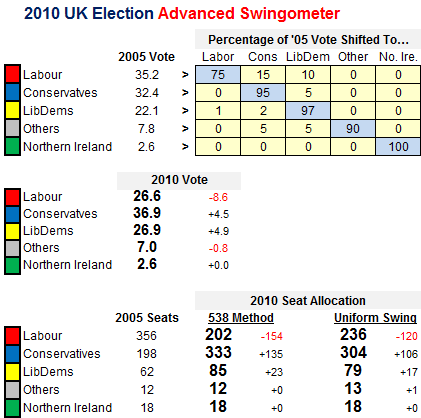 Next, suppose there is a truly nightmarish scenario for Labour in which both Conservatives and LibDems do well and Labour pulls in only 23.1 percent of the vote. Our model has them all the way down to just 126 seats, whereas uniform swing gives them 190. 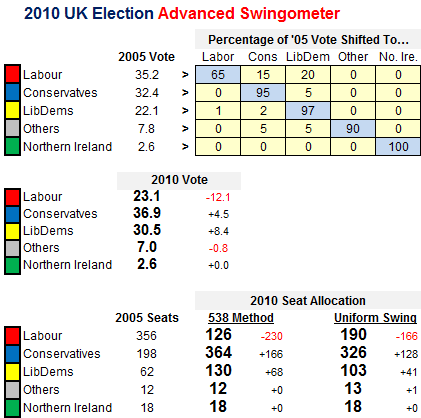 Finally, in the interests of fairness, let’s test a rosier scenario for Labour, with the vote split about evenly at 30 percent between the three parties: 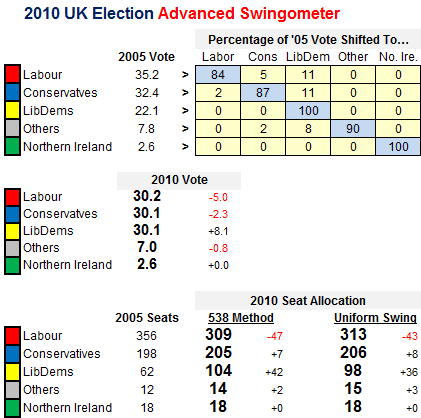 Here, we see that Labour does have some structural advantages — it would wind up with a hair over 300 seats, versus about 200 for Conservatives and 100 for Liberal Democrats. In this case, also, there are few differences between the forecast put out by our advanced model and that from uniform swing. Instead, the differences seem to arise once Labour gets down to about 28 percent of the vote, after which an inflection point of sorts is passed. There are quite a lot of constituencies, for instance, in which the vote in 2005 was something like Labour 45, Conservatives 30, LibDems 20. Our model thinks that these sorts of districts are actually in quite a bit of danger, whereas uniform swing regards them as fairly safe.

Now for the disclaimers: this method is unproven and surely has some flaws of its own. For instance, it does not account for voters exiting or entering the electorate, the effects of which would arguably more similar to uniform swing. And it cannot directly account for tactical voting in which voters look at the polls and their vote preference changes as a result — for instance, voting for a LibDem candidate even if they prefer the Conservative, because he has the best chance to knock off Labour. Renard and the international desk are working on versions of the model which can account for these factors in more robust ways, as well as the effects of things like regional Scottish and Welsh parties.

In general, however, Labour backers should not take too much confidence from uniform swing calculations: they have been badly wrong in the past and there is some evidence that they may be badly wrong again. Particularly if Labour’s vote were to wind up in the mid-20s, its very hard to see how they could thread the needle in such a way that the outcome wouldn’t be devastating to them.