This article was written before Friday’s employment report. However, that report added no information to change the conclusions of this article.

I wanted to finish with my thoughts on the labor market. First, this started with an analysis of the other two jobless recoveries. I started the analysis because this is not the first “jobless recovery” we’ve seen; it is, in fact, our third. The analysis revealed that a drop durable goods employment was the primary reason for the unemployment rate remaining at high levels for at least a year after each of the last two recessions ended. Let’s take a look at the current labor market. 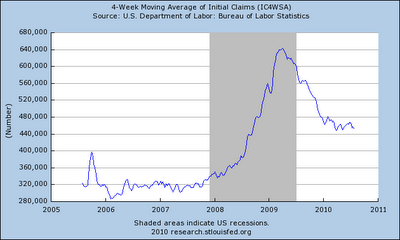 Like the last two recoveries, initial unemployment claims have remained elevated moving into the recovery. As a result, 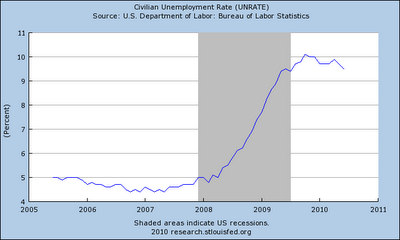 The unemployment rate has remained elevated. 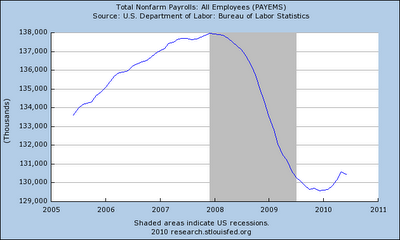 Above is a chart of total establishment jobs for the last five years. Simply estimating the total jobs lost from peak to the current level we get about 7.6 million (roughly 138 million to 130.4 million). 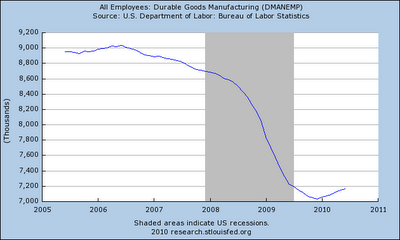 Total durable goods jobs lost are equal to about 1.8 million. So while these jobs were a primary driver for the long-term employment issues in the last two recoveries, they are only part of the reason for the problems in the current recovery. These account for about 23% of all lost jobs. 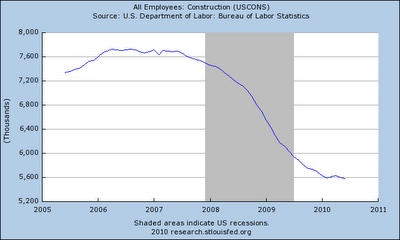 Construction jobs (obviously related to the problems in the housing market) are down about 2 million, accounting for about 26% of the lost jobs. 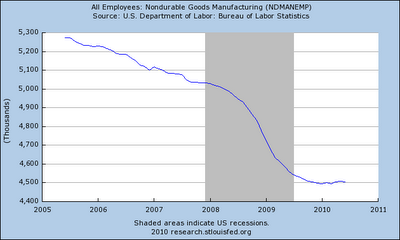 Before we move forward, remember the pattern from the previous expansions with durable goods employment. Output increased thanks to an increase in productivity. If that trend still holds (and it probably will) there is no reason to think that trend won’t continue. That trend will also extend into non-durable goods employment. In addition, considering how overbuilt the housing and commercial real estate market is right now, it’s doubtful construction employment will return to previous highs either. In other words, at least 60% to the jobs lost will take a long time to come back.

Something I don’t know the answer to but would be very curious to find out is 1.) how many of the jobs lost are moving into early retirement and 2.) the average age of the manufacturing population for both durable and non-durable goods manufacturing. My thought here is we’ve seen manufacturing employment drop for nearly two decades. That kind of drop will lead to fewer and fewer newer hires as the trend to lower employment continues. So, are the job losses we’re seeing really a case of accelerated attrition (companies simply getting rid of jobs they intended to get rid of at a faster pace) or is there another trend in place? 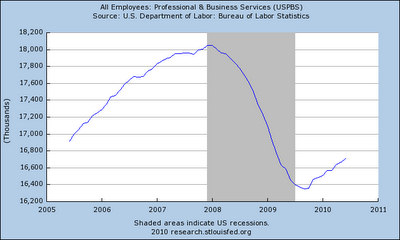 Professional and business services have lost about 1.7 million from peak to their current level, but this area of the economy has been adding jobs since the end of the third quarter/beginning of the fourth quarter of 2009. These jobs account for about 22% of all jobs lost. 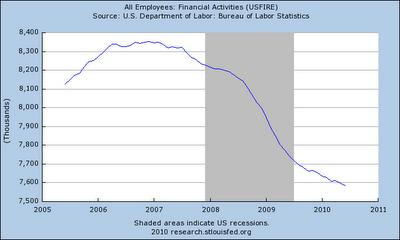 Financial activities are still losing jobs, and have lost about 700,000 or 9% if jobs lost.

The biggest problem we face is the job losses in “blue collar” industries, which account for about 60% of all job losses. With the exception of financial activities, the other service sectors have either bottomed or are rebounding somewhat. However, it’s the blue collar area that will cause the most trouble.