The US economy is currently experiencing its third “jobless recovery.” However, this term is an incorrect description of the employment situation. Instead, the US labor force is going through a structural alignment where the amount of labor inputs necessary to produce durable goods is decreasing, despite an increase in overall output. This has important long-term ramifications for the labor market.

The NBER dates the early 90s recession as occurring between 7/90 and 3/91. Let’s take a look at GDP growth before, during and after the recession: 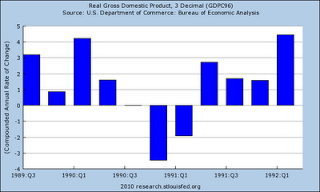 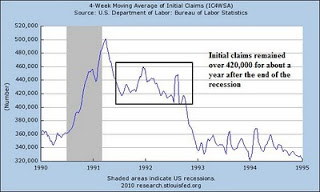 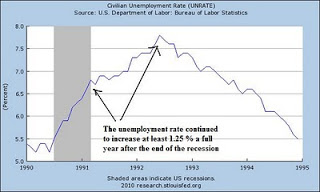 notice the unemployment rate rose after the recession ended.

Let’s take a closer look at the establishment job data: 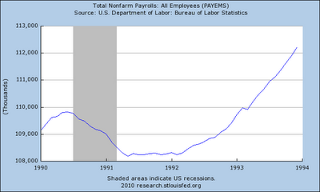 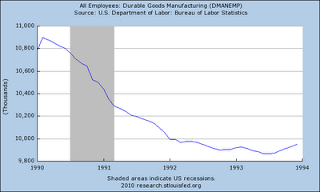 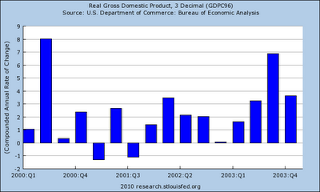 Above is a graph of the percent change in real GDP from the previous quarter. This was a mild recession, as GDP during the recession turned positive for one quarter. However, like the early 1990s, this entire period — roughly 3 years — is characterized by weak growth before, during and after the recession. 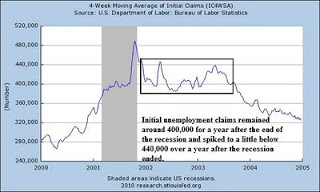 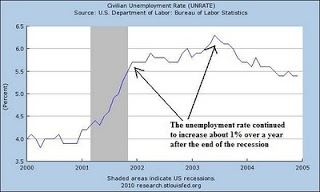 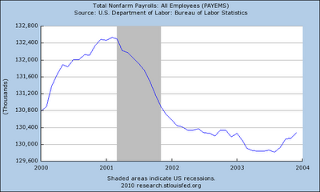 Above is a chart of total establishment employment before and after the recession. Notice that total job losses were about 2.4 million (a drop from approximately 132.4 million to 130 million) from January 2000 to December 2003. 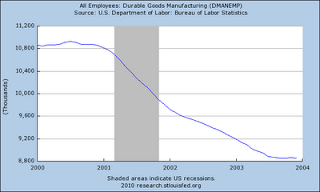 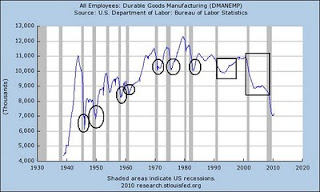 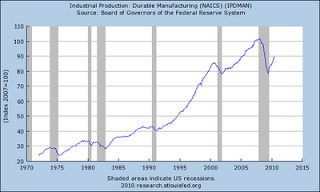 Above is a chart of industrial production for durable goods manufacturing. Notice that during the 1990s and 2000s expansion this number increased at strong rates, indicating US manufacturing was creating a large number of goods. 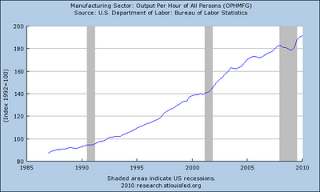 Above is a chart of output per hour of employee in the durable goods area. Notice that it has continually increased for nearly 30 years with a few dips. This chart indicates that US manufacturing employees have continually made more “stuff” per hour worked. This chart also partially explains the continued drop in US durable goods manufacturing employment: the US economy is making more with less. 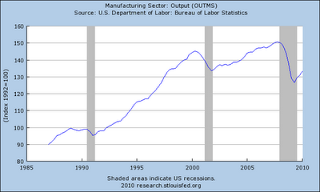 The “jobless recovery” is in fact a realignment of the US labor force. Fewer and fewer employees are needed to produce durable goods. As this situation has progressed, the durable goods workforce has decreased as well. This does not mean the US manufacturing base is in decline. If this were the case, we would see a drop in both manufacturing output and productivity. Instead both of those metrics have increased smartly over the last two decades, indicating that instead of being in decline, US manufacturing is simply doing more with less.