In early April, things finally came unhinged in the former-Soviet Republic of Kyrgyzstan. Just five years after the so-called Tulip Revolution, which violently swept the former Kyrgyz President Askar Akayev out of power after the 2005 disputed Parliamentary election, another forced change of power had occurred.

What had made up the combined revolutionary political forces in 2005 had by 2010 splintered into two groups. The first was led by former Prime Minster Kurmanbek Bakiyev, who was appointed President in the wake of the Tulip Revolution, while the second was led by former Foreign Minister Roza Otunbayeva, who has now taken the Presidency until the planned 2011 parliamentary elections.

The political unrest has led to a simultaneous explosion of violence in the ethnically volatile Southwest of the country, as lond standing grievances between the majority ethnic Kyrgyz community and the minority Uzbeks have come to a head. Dozens of people have been killed and thousands displaced in the fighting, mainly in and around the southern city of Osh. 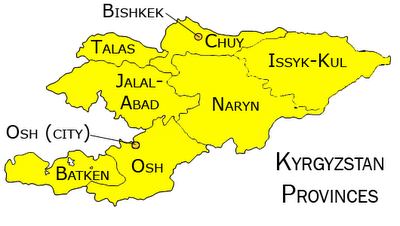 Kyrgyzstan is a multi-ethnic nation dominated by the Kyrgyz, who make up about two-thirds of the population, along with large Uzbek and Russian minorities. The Russian minority has been systematically dropping since the fall of Soviet Union, falling from about a quarter of the population in the 1970s and 80s to 12 percent in 1999 (and estimated to be lower now). 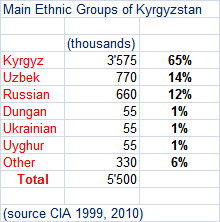 The Uzbek population is largely focused in the West and Southwest, while the Russian population is mostly in the North around the capital, Bishkek. 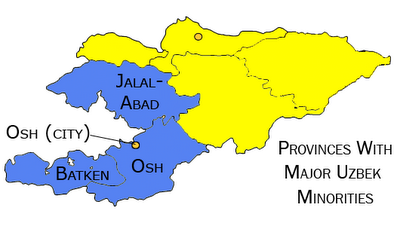 The major violence and displacement in the South — the UN refugee agency (UNHCR) estimated in June that the number displaced people in Kyrgystan has reached at least 300,000, while an estimated 100,000 have sought refuge in neighboring Uzbekistan.

As a result, it was a surprise to many observers when the interim government, led by Roza Otunbayeva, decided to move ahead with plans to undertake a referendum on a new constitution for the country. Not simply minor adjustments to the country’s legal framework, the new constitution completely changes the political system of Kyrgyzstan from a Presidential system with wide executive authority to a Parliament-led system — effectively switching the power positions of the President and the Prime Minister.

The referendum, which asked voters to endorse both the new constitutional setup as well as the interim Otunbayeva government, which would expire at the end of 2011.

Overall, the referendum passed overwhelmingly, with nearly 91 percent of the national vote in favor of the proposition, with an overall turn-out of 72 percent of eligible voters. 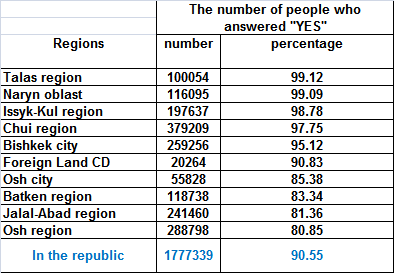 The 90.55 percent figure belies a significant fracturing of the vote — and the number of voters who were able to cast their ballot — across the country. 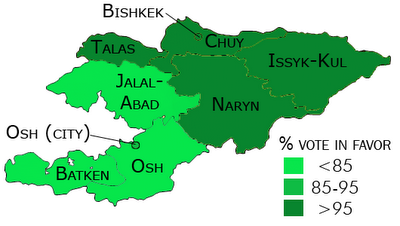 In the Northern provinces and the capital, the vote in favor of the new constitution was nearly unanimous, with several provinces voting more than 99 percent for the measure! In the South, however, particularly in Uzbek areas, the support was softer (though still very high). 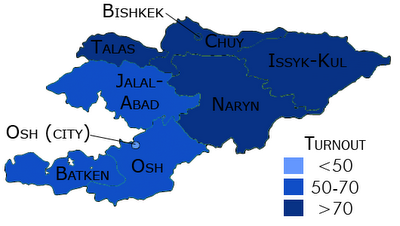 Turnout reflects largely the same trend, suggesting that displaced Uzbeks were highly underrepresented in this vote. In Osh city, turnout was less than 50 percent, with 85 percent of those who were able to vote casting the “yes” ballot.

Nonetheless, even if the 300,000 internally displaced and 100,000 refugees (mostly Uzbeks) had managed to cast “no” votes on the measure, it would have raised the overall “no” figure only up to about 24 percent, while those in favor would have still had a big win with 76 percent.

At the same time, it is not so much the content of the constitutional proposal that ran counter to the interests of the Uzbek minority as the overall political shift towards violence with impunity in the anarchic Southwest. Politically and socially, the next government and the international community (including Russia, the US and the EU) will have to take rapid and decisive action to resolve the situation and find a stable way forward.