In the NBA, the apex of individual shooting is a 50-40-90 season — shooting 50 percent from the field, 40 percent on 3-pointers and 90 percent on free throws. Not many people can sustain that kind of accuracy from inside and out. Since the three-point line was adopted for the 1979-80 campaign, just six players (in 10 seasons overall) have hit 50-40-90 on their percentages.1

Kyle Korver is doing his best to become the 11th. There are a handful of players within striking distance of 50-40-90, but only Korver, the Atlanta Hawks’ All-Star shooting guard, is on pace to achieve it. Korver is operating on a different plane of existence right now — shooting 51.2 percent from the field, 52.3 percent on 3-pointers and 91.1 percent from the free-throw line. He could have the first-ever 50-50-90 season.

Since the 1979-80 season, 1,184 player seasons have met the minimum benchmarks, and the overlap between their shooting percentages emphasizes just how rare the achievement is that Korver is chasing.

Korver’s performance so far became more astonishing the more I looked at the numbers. If we include him in those 1,184 player seasons (he hasn’t met the minimum benchmarks but is on pace to,2 barring injury), his percentages this season would rank in the 97th percentile in both field-goal percentage and free-throw percentage. His 3-point percentage would be the best of any player in the sample. If we compare those percentile ranks with the other 50-40-90 seasons, along with True Shooting Percentage, Korver has a legitimate claim to the greatest shooting season of all time.

But can Korver keep this up for the rest of the season? What we know about players regressing to the mean suggests probably not. But we’re more than halfway through the season, and the possible variability in his end-of-season percentages is reduced with each shot he takes. In Korver’s case, nothing’s guaranteed — yet.

The chart below shows, for each season, how many percentage points Korver’s final field-goal percentage differed from the percentage he was shooting at other points in the season.3 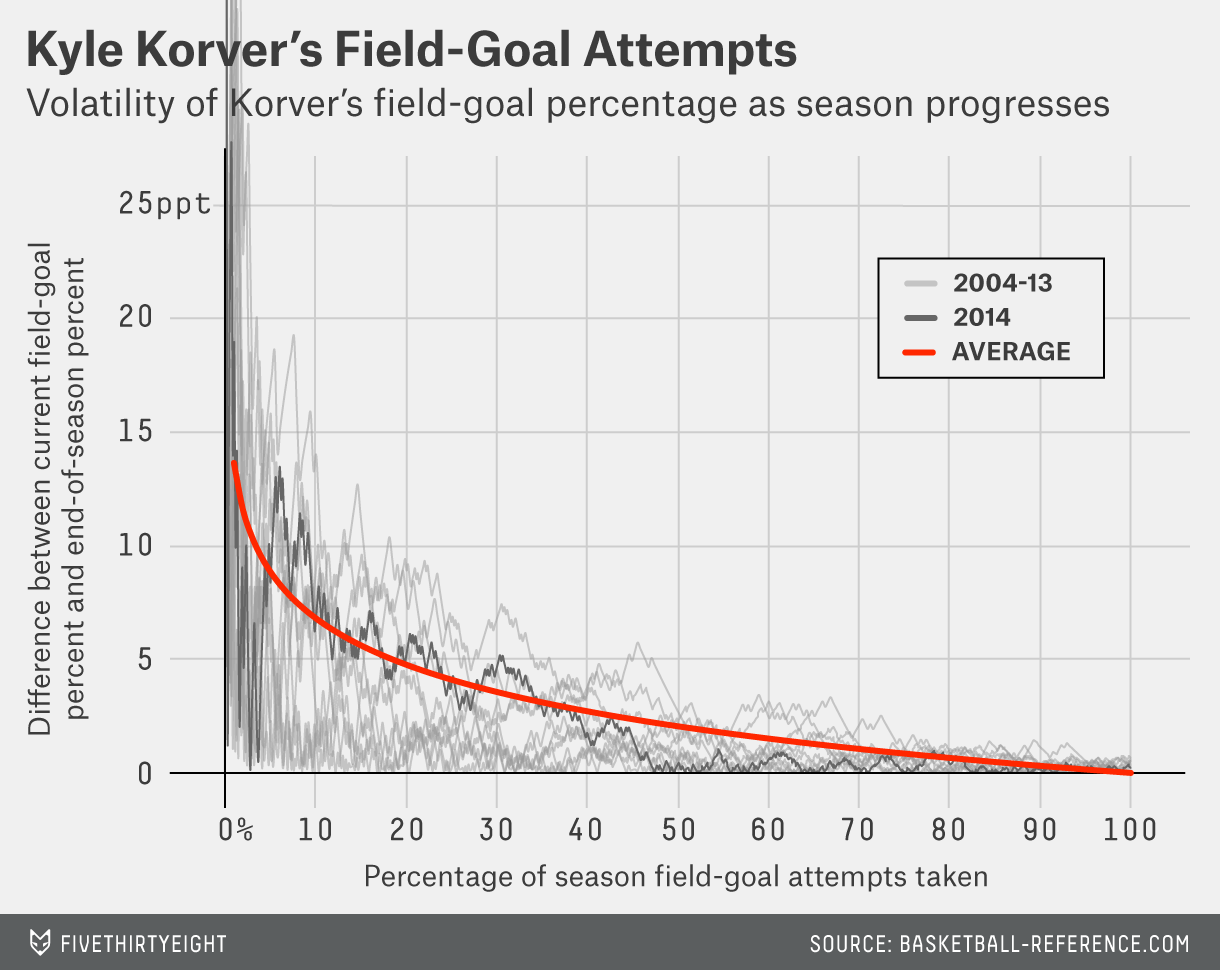 If we assume Korver will play the rest of the season, attempting field goals, free throws and 3-pointers at the same rate as he has to this point, then he has just passed the 65 percent mark. Going by the trend line, we would expect his current field-goal percentage to vary from his final mark by about 1.3 percentage points. Shooting exactly 51.2 percent from the field at this point, hitting 50 percent from the field does not seem secure.

Using the same technique to look at his free-throw shooting yields a similarly murky projection. 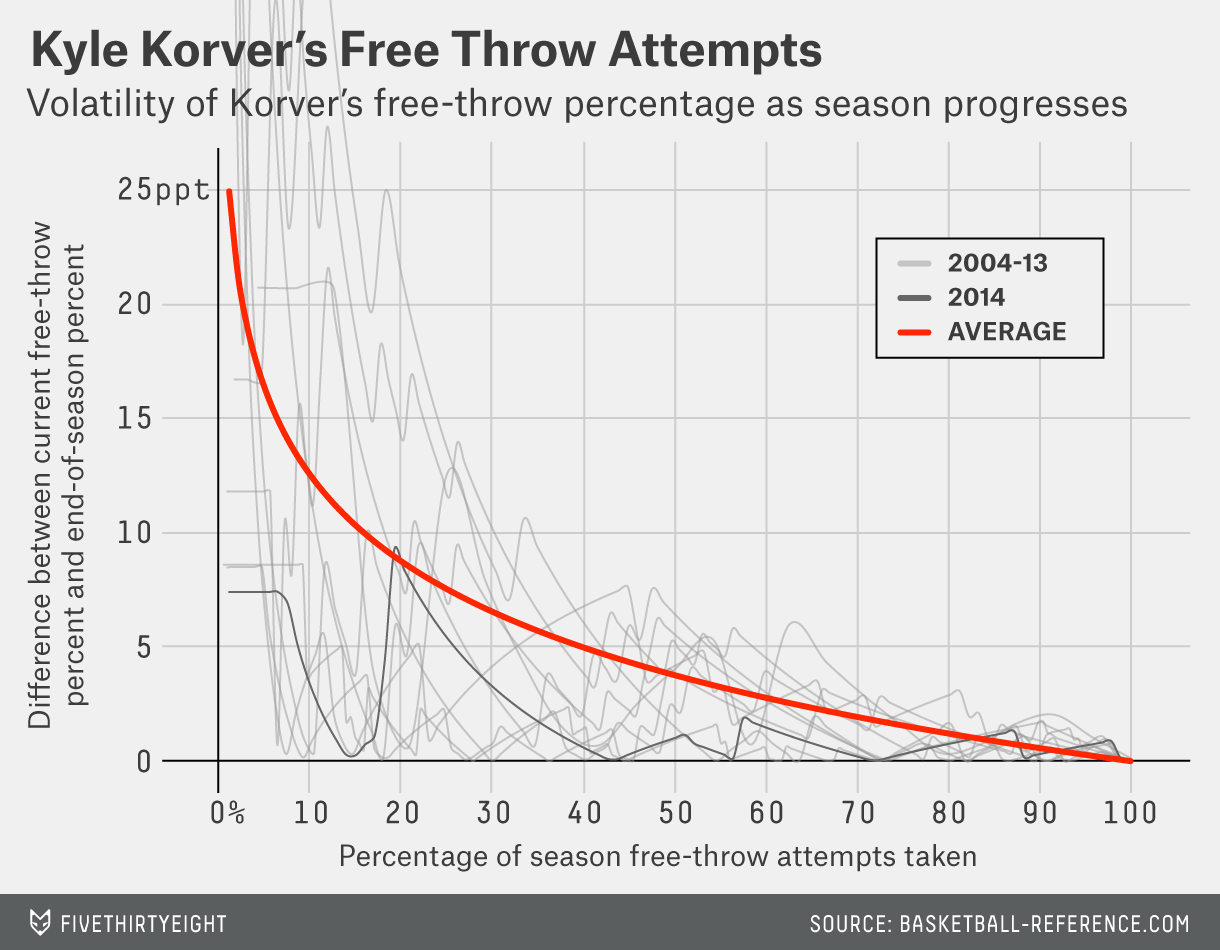 By the trend line, we would expect Korver’s current free-throw percentage to vary by as much as 2.3 percentage points from his final tally. Because he’s shooting 91.1 percent from the line, he could easily fall below the 90 percent threshold. Korver typically attempts far fewer free throws than shots from the field, this season included, and thus there is a lot more variability throughout the season.

Interestingly, the mark that seems most secure — his 52.3 percent shooting on 3-pointers — could be his undoing. Here is the same chart for his 3-point percentage. 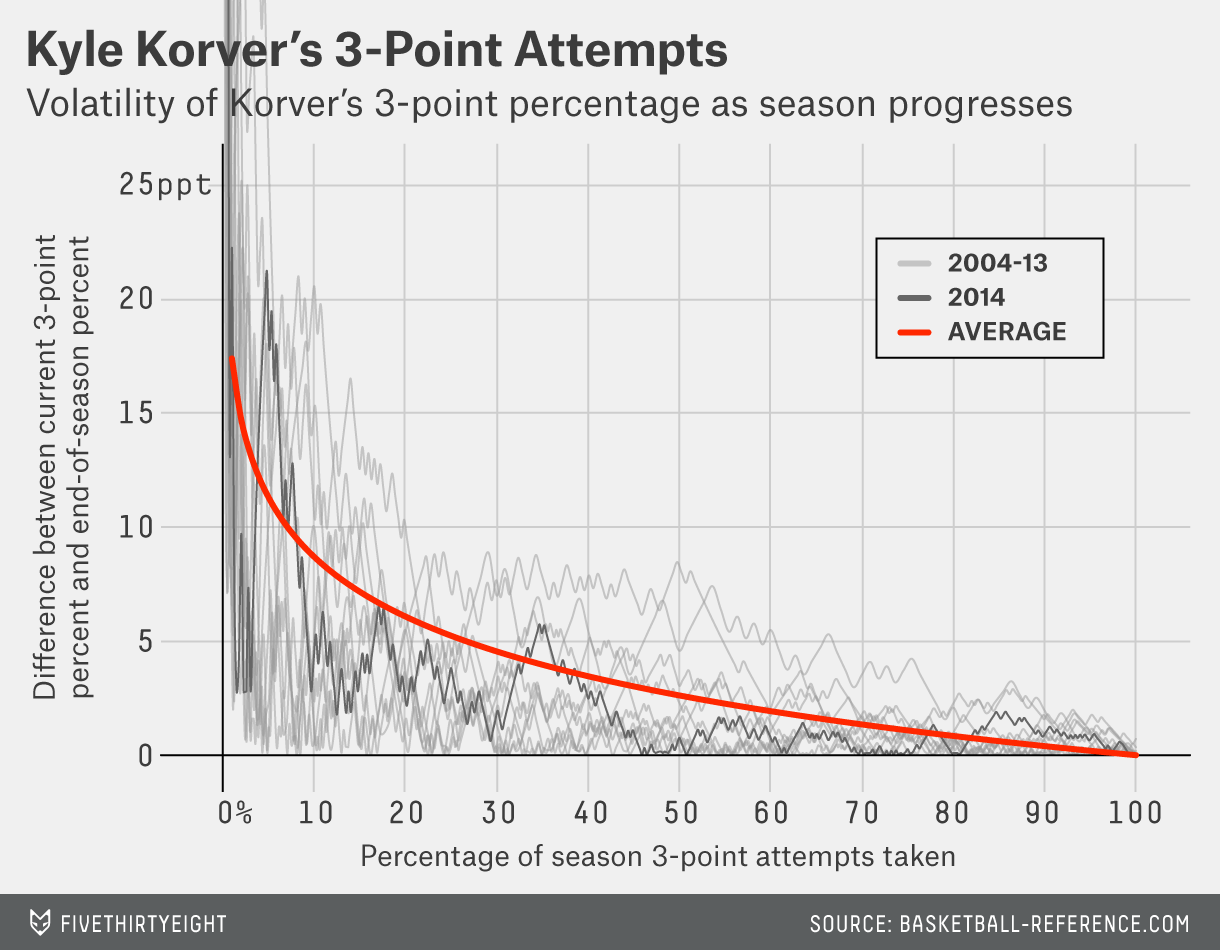 Korver is chasing history and walking a tightrope. He has put up a half-season’s worth of shooting efficiency that can stand against anything in the record books. But if 50-40-90 is the goal, it’s not time to exhale quite yet.