The Los Angeles Kings were the top team in the NHL this season, according to the most predictive team statistic hockey’s analytics movement has to offer. Now they’re down two games to none against the San Jose Sharks in the playoffs, and in real danger of being eliminated in the first round. How rare is it to see a “fancystats” darling like the Kings fail this early in the chase for the Stanley Cup?

First, a bit of background is in order. One of the major breakthroughs in hockey analytics came within the last five years, when analysts realized that instead of relying on conventional indicators like winning percentage or even goal differential, a team’s future performance could be more effectively predicted by its rate of puck-possession. One proxy measurement for this comes under the silly-sounding name “Fenwick close,” which measures the percentage of all even-strength shots taken by a team in its games, after adjusting for score effects. (Overall Fenwick looks at a team’s shots directed at the goal — including missed shots but excluding blocked shots — expressed as a percentage of the total shots in the game.)

Since Fenwick became widely available in the 2007-08 season, the close measure has had an impressive résumé in the NHL postseason. From 2008 to 2010, two of the league’s top regular-season Fenwick close teams have won the Stanley Cup (Detroit in 2008 and Chicago in 2010) and a third came within a game of winning the trophy (Detroit in 2009). The track record for Fenwick close leaders after that is more spotty, with zero league finals berths among them, but those teams still advanced to the conference finals twice in three seasons. So in recent years, it’s pretty unheard of for a team like the Kings — this season’s Fenwick close No. 1 — to fall in the first round.

But that’s only a six-season sample. What about similar teams before that? Unfortunately, we don’t have the data to compute Fenwick prior to 2007-08, but we can estimate it for older teams using regression analysis. As I and others have shown before with historical plus/minus in the NBA and historical QBR for NFL quarterbacks, if you want to estimate a newer metric for years before it was tracked, you have to find statistics that were tracked at the time and are correlated with the advanced metric in question (assuming the data meets the requirements for regression).

After performing such an analysis on hockey stats website BehindTheNet’s Fenwick close sample from the 2007-08 through 2012-13 seasons, I found three conventional metrics that together explain roughly 88 percent of the variance in team Fenwick close:

(* Note: I didn’t use actual PP goals allowed when calculating the differential — the model works best when it uses the team’s real number of PP goals scored on the offensive side, but on the defensive side multiplies the league’s average PP percentage by the number of PP chances allowed by the team per game.)

Here’s a plot of our estimated Fenwick close versus actual Fenwick close for the years in which Fenwick was recorded (the NHL average is always exactly 50 percent): 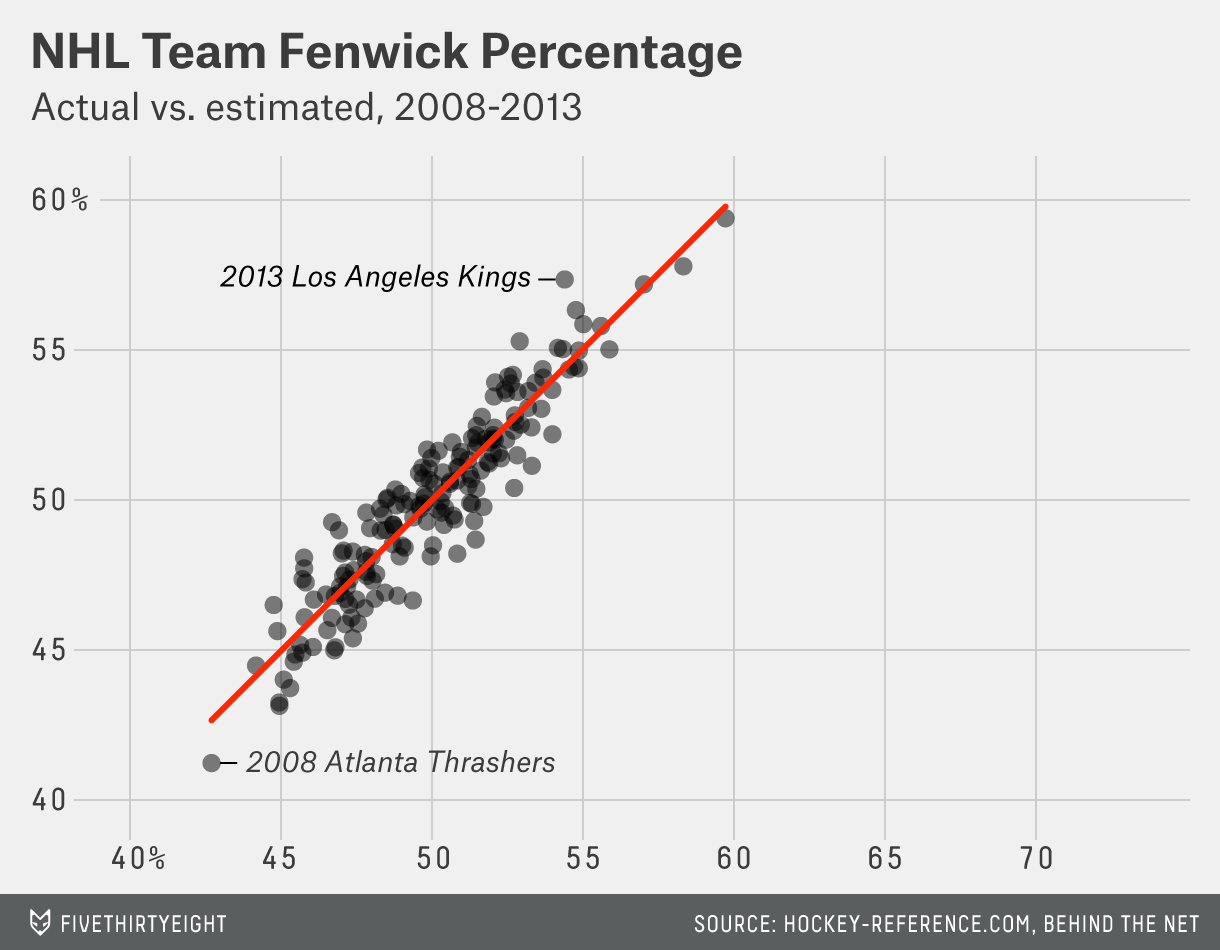 As you can see, the results of the model track very closely with reality. That means the model can also give us a “most likely” Fenwick close for teams in seasons before BehindTheNet’s data was available (going back to 1987-88, which is as far back as NHL.com lists shots per game by team). We can also compute the probability that any given team would have been the NHL’s Fenwick close leader if the statistic had been kept during the season in question. 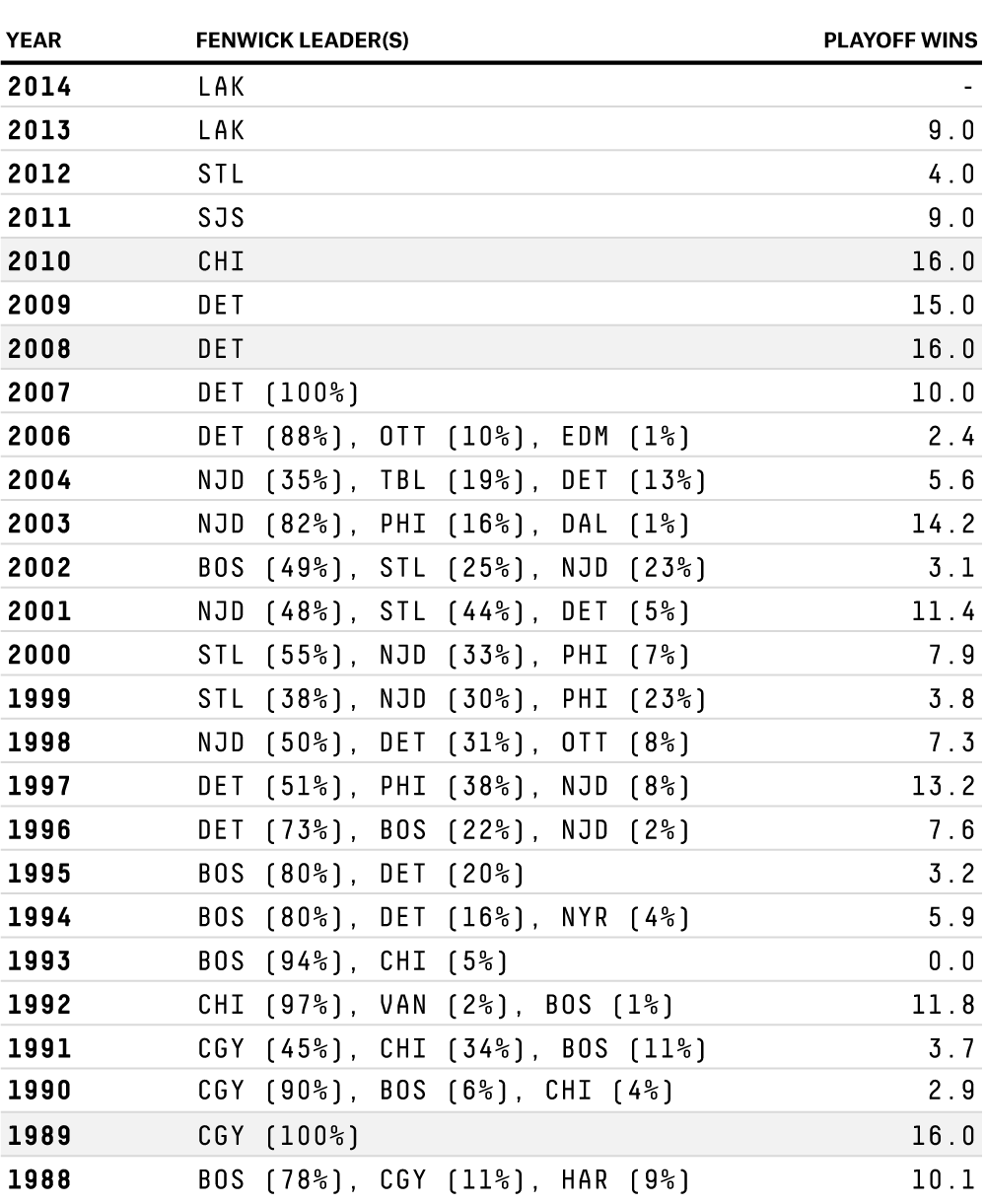 If the Kings do fall to the Sharks after only picking up a win or two, it would be a historically low performance for a Fenwick close leader. In just seven postseasons was it likely that the league’s Fenwick close leader won fewer than four playoff games, which would be indicative of a first-round series loss. And only one playoff year (1993) saw the weighted mean of likely Fenwick close leaders drop below 2.4 playoff wins. (If we assume the Kings and Sharks are evenly matched and the home team has the NHL’s standard 55 percent home-ice advantage in each remaining game, Los Angeles should only expect to win 1.8 games over the rest of the series.)

Meanwhile, the median and mean number of playoff wins for Fenwick close leaders going back to 1988 is eight, enough to win a couple series.

While leading the league in Fenwick close isn’t necessarily a guaranteed path to the Cup, Fenwick close leaders usually go relatively deep into the NHL playoffs. The Kings are hoping to keep that trend alive, but the odds are pointing to LA becoming one of the most disappointing advanced-stats favorites in a long time.