Sony Pictures Entertainment announced Wednesday that it will pull the planned Dec. 25 theatrical release of “The Interview,” an action-comedy that stars Seth Rogen and James Franco as madcap would-be assassins of North Korean leader Kim Jong Un. The film was the apparent inspiration for a widespread and embarrassing hack of Sony’s servers that U.S. intelligence officials think may have been initiated by the North Korean government.

Sony said it has no further release plans for “The Interview,” including on DVD or video on demand. (Disclosure: In 2009, I conducted a survey research project for Sony Pictures Entertainment.) Before Sony’s decision, several major theater chains announced they would decline to screen the film.

The decision — and the hack — will be costly to Sony. We can look at comparable films to come up with an estimate of how much “The Interview” might have made in theaters had it been released under normal circumstances. The answer: $100 million, give or take.

I came up with that estimate by looking up comparable films on IMDb. Specifically, I looked for films that:

These films are listed below, along with their worldwide box office grosses, production budgets and Rotten Tomatoes ratings. All figures in the article are adjusted for inflation. 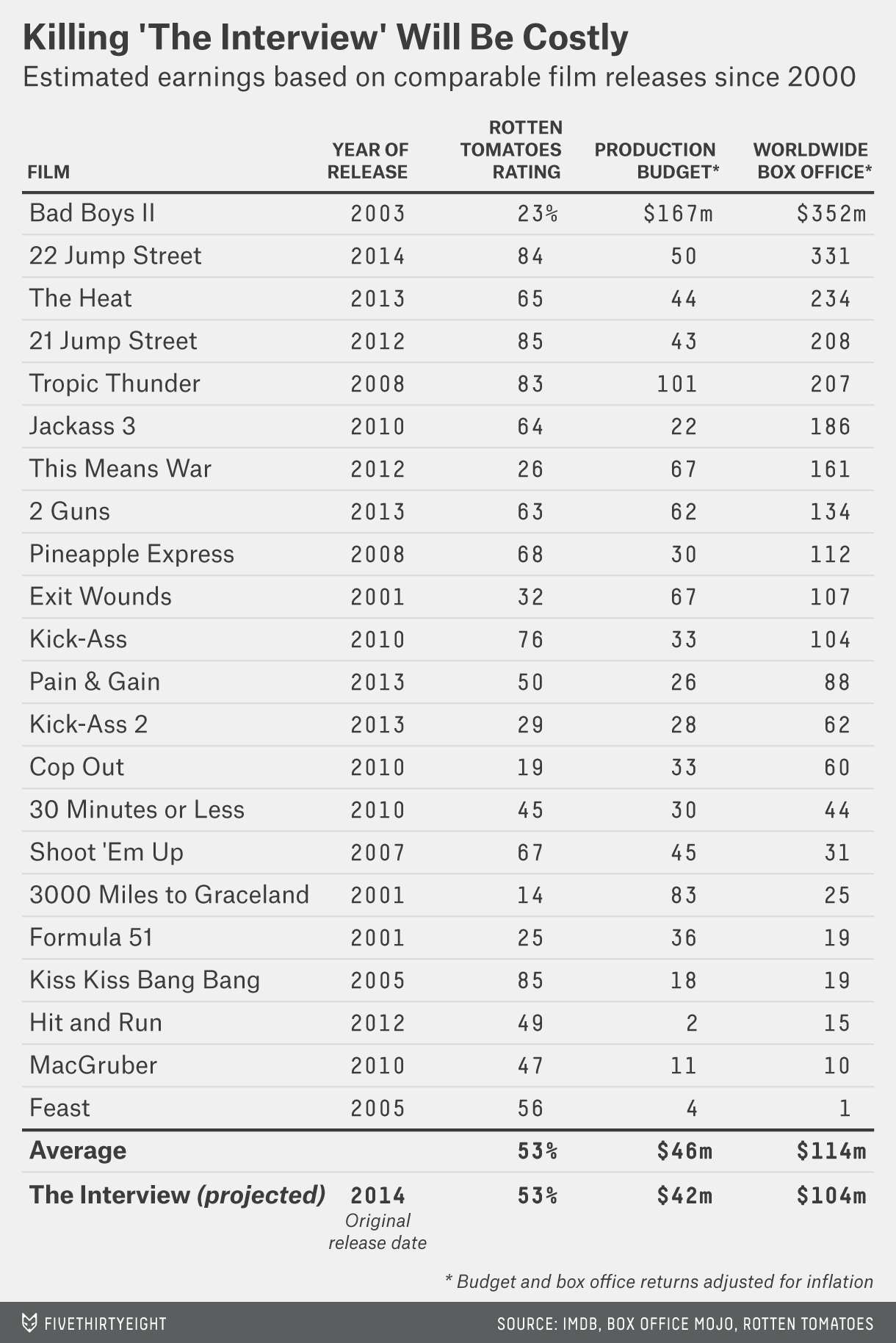 These movies aren’t always critical favorites. Their average Rotten Tomatoes rating has been just 53 percent, and no film has scored higher than 85 percent. But audiences like them, and their combination of action sequences and slapstick humor can travel well, sometimes garnering them more box office revenue internationally than in the United States.

These films also rarely involve the nine-figure budgets sometimes associated with full-fledged action blockbusters. Instead, their average production budget has been $46 million.

“The Interview” had looked a typical film from the genre in just about every respect. Its Rotten Tomatoes rating was 53 percent as of early Wednesday evening, exactly matching the average of similar films. And its production budget was $42 million.

Both production budgets and Rotten Tomatoes ratings are predictive of box office grosses. A 1 percent gain in Rotten Tomatoes ratings is associated with a roughly $2 million increase in international box office gross (according to a linear regression analysis). And every additional $1 million in production budget translates to about $2 million more at the box office. If that sounds too good to be true, keep in mind that reported production budgets usually do not include promotion and advertising expenses, which can be substantial for films like “The Interview,” running into the eight figures. (As it happens, a commercial for “The Interview” came on just as we were working on this article.)

The analysis predicts that “The Interview” would earn $104 million at the international box office. The uncertainty on that estimate is wide, but such a figure would be similar to the average for similar films and for “Pineapple Express” in particular.

Of course, the film might have made even more given all the publicity surrounding the hack. If Sony and the theaters have the guts to show the film, I’ll be the first one in line.