In the previous five states where I released projections, I felt pretty darn comfortable with them. They happened to closely track the polling averages in four of five cases, and while they didn’t in North Carolina, I had plenty of reasons to believe that my numbers were solid.

But this projection in Kentucky — I’m not so certain about. If I were a betting man, I’d certainly take the over on Clinton’s margin. With that said, Kentucky shouldn’t be that bad for Obama. Approximately 8 percent of the population is black, and the black vote will make up a higher share than that in a closed Democratic primary. West Virginia had no real urban areas to speak of. But Kentucky has Louisville, as well as Lexington, which is a big university town, and a few pockets of wealth in the Cincinnati suburbs around Covington. Obama has actually outfundraised Clinton in Kentucky — that very much wasn’t the case in West Virginia — although almost all of that advantage has come from the city of Louisville. He has the endorsement of the state’s largest newspaper and one of its most popular politicians in Ben Chandler.

So, let’s run the numbers and see if we can’t get lucky.

One more thing first, though, and I think it’s the one decent reason why the pollsters might be overestimating Clinton’s margin in Kentucky. John Edwards is on the ballot in Kentucky, as is an uncommitted option. I looked at the nature of the Edwards/other vote in the states since he dropped out of the race and found that it was significantly higher in white, rural areas with low education levels, and particularly in the Appalachians. In other words Kentucky, as West Virginia, ought to turn out a pretty high Edwards vote. Moreover, I found that those Edwards votes tend to come more at Clinton’s expense rather than Obama’s. Frankly, I think the Edwards votes are coming mostly from voters who have no affection for Hillary Clinton but aren’t ready to vote for Barack Obama because (i) he hasn’t made much of an effort to win their states, or (ii) he’s black.

Suffolk, which was the only pollster to mention Edwards by name, found 6 percent support for Edwards and 5 percent support for Uncommitted. And Suffolk also happened to show Kentucky slightly closer than some other pollsters. So, I think this is a factor that might knock a few points off Clinton’s ability to run up the score, particularly given that Edwards has endorsed Obama. 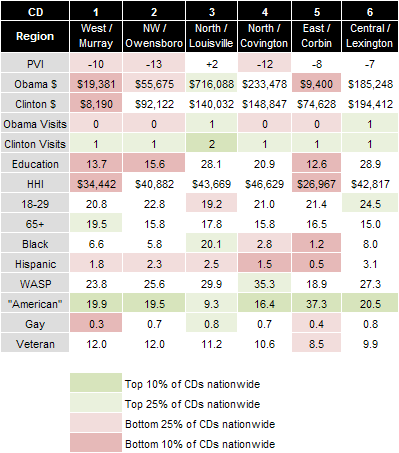 KY-1 (West/Murray): This district is not technically Appalachian, but that doesn’t mean that Barack Obama has a whole lot going for him there. It’s education and income levels each fall within the bottom 10 percent of the nation, and it has the highest elderly population in Kentucky. The only positives for Obama are that the district has a decent-sized African-American population, and Clinton’s fundraising has been terrible there (although, so has Obama’s). These things will perhaps be enough to hold Clinton to a 3-2 delegate victory, but it will be pretty close. Projection: Clinton 63.1, Obama 28.2, Other 8.7; Clinton 3-2 Delegate Win.

KY-2 (Northwest/Owensboro): The second district is similar to the first in most respects, very white and very rural, but has some pockets where it is middle class and, as PsiFighter points out, has the college town of Bowling Green. It is almost certain to produce a 3-2 delegate split. Projection: Clinton 59.0, Obama 32.9, Other 8.2; Clinton 3-2 Delegate Win.

KY-3 (North / Louisville): The third district occupies pretty much the entirety of Louisville, and pretty much nothing outside of Louisville. Obama is actually the favorite to win here. It’s one of just two Kentucky districts that he’s visited, it’s the only Kentucky district that leans Democratic, it’s tolerant enough to maintain a decent-sized gay community. Perhaps one-third of its turnout will be black, and Obama has raised about five times as many dollars as Clinton has here. We have Obama earning just enough votes to garner a 5-3 delegate win. It should also have the highest turnout in the state, which might help Obama to preserve some dignity in his statewide popular vote margin. Projection: Obama 53.9, Clinton 41.6, Other 4.5; Obama 5-3 Delegate Win.

KY-4 (North / Covington): This is the only district in Kentucky where income levels approach the national average, although that income is not evenly distributed. Covington, a suburb of Cincinnati, is quite wealthy (although also very strongly Republican, which will limit its influence) whereas the Eastern reaches of the district are poor and Appalachian. The two subregions should balance out in such a way as to almost certainly produce a 3-2 delegate split in Clinton’s favor. Projection: Clinton 56.7, Obama 36.4, Other 6.9; Clinton 3-2 Delegate Win.

KY-5 (East / Corbin): This is arguably the worst Congressional District in the entire country for Barack Obama, and is almost certainly the worst outside of Arkansas. The percentage of voters who identify their ancestry as “American” on census forms is the best proxy we have found for Appalachian status, and 37.3 percent of the population identified themselves that way here — by some margin the highest proportion in the country. KY-5 is also exceptionally poor, and was one of Obama’s five worst fundraising districts. Things are so bad, in fact, that Obama has to be worried about not garnering the 15 percent he’ll need to avoid missing the delegate viability threshold. There should also be a fairly large Edwards/uncommitted turnout, which helps Obama to the extent that it takes votes away from Clinton, but might make it harder for him to reach that 15 percent number. There’s even an outside chance that Edwards could pick up a delegate in this district. Projection: Clinton 71.4, Obama 16.4, Other 12.1; Clinton 4-1 Delegate Win.

KY-6 (Central / Lexington): Comprising both Lexington and Frankfort, this is the other ‘urban’ Kentucky district (though still very rural in places), and one of two that Obama has visited. Note the relatively high youth population, which reflects the University of Kentucky; it also has the second-highest black population in the state. If Obama can do a reasonable job of turning out his base, he should manage a 3-3 delegate split. Projection: Clinton 50.5, Obama 43.2, Other 6.4; 3-3 Delegate Split.

Our model is projecting a 19-point popular vote win for Clinton, with about 7 percent of the vote going to Edwards and uncommitted. That would be worth a net gain of about 95,000 popular votes for her, which would closely match Obama’s projected margin in Oregon. (Keep in mind that Kentucky should have smaller turnout than Oregon, as both states hold closed primaries but Oregon has more Democrats). We show the delegate count at Clinton 30, Obama 21, but Obama is picking up an extra delegate by small margins in a couple of cases, so 31-20 or perhaps 32-19 may be more likely.

Can Obama actually keep the popular vote margin within 20? I still wouldn’t bet on it, but in addition to the Edwards factor, there is also the consideration that the polls have tended to underestimate Barack Obama’s margin in Southern states. (Granted, that effect tended to be concentrated in Southern states with relatively large black populations, which Kentucky does not have.) Obama has also had a couple of pretty good news cycles, with the endorsement of Sens. Edwards and Byrd, and his ability to engage George W. Bush. Still, Clinton has campaigned hard in the state, and to my eyes her locally-targeted messaging has been effective. I can see Obama keeping things within 25 points, but 20 seems like a stretch.