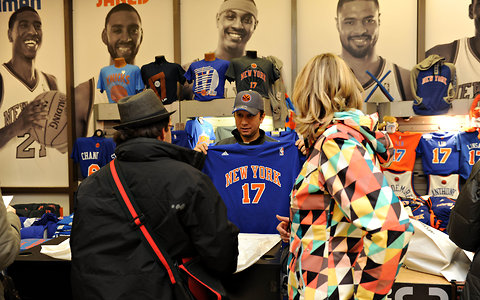 Barton Silverman/The New York TimesJeremy Lin’s performance alone did not reflect the impact of Linsanity. The Knicks’ parent company has added about $600 million in market capitalization.

In February, during the height of the Linsanity phenomenon, I attended a game at Madison Square Garden between the Knicks and the Sacramento Kings.

The tickets cost an arm and a leg. But Jeremy Lin and the Knicks did not disappoint. Lin had just 10 points in 26 minutes of play, but many of his 13 assists were spectacular, a series of flawless alley-oops that sent Tyson Chandler and Landry Fields dunking on the Kings like the guys from Sacramento were the Washington Generals, the Harlem Globetrotters’ perpetually hapless opponents.

What was more remarkable was the action that took place off the court. This was only Lin’s sixth game as the Knicks’ starting point guard — and just his third start at Madison Square Garden. But the concourses were filled with fans in Lin jerseys. And the high-priced seats were full of people carrying well-intentioned (although sometimes racially insensitive) signs in tribute to him.

The Knicks seemed to be doing everything in their power to encourage the trend. At the team stores around the arena, a wall of Lin bling dominated the displays, while gear for the Knicks’ other high-priced stars — Chandler, Amare Stoudemire and Carmelo Anthony — was consigned to the sale racks. (Lin jerseys eventually outsold those of all other Knicks — and all other players in the N.B.A. except Derrick Rose of the Chicago Bulls.) After every Lin bucket or assist, the Knicks public address announcer Michael T. Walczewski paused for emphasis before reciting his name, before the stadium burst into manic applause.

Lin, in other words, was getting the superstar treatment from the Knicks and their fans. Here, after all, was one of the more remarkable sports stories in a generation. In a sport which is not usually forgiving to underdogs, an undrafted point guard out of Harvard was lighting up cash registers and scoreboards, and turning even the most jaded New Yorkers into die-hard fans.

It didn’t hurt that Lin was Taiwanese-American — in a city where there are about 450,000 residents of Chinese or Taiwanese descent. There are more Chinese-Americans in New York than the entire populations of several N.B.A. cities like Miami, Atlanta or Cleveland (about 400,000 each).

To think of the marketing potential in China itself, which has been starved for an N.B.A. superstar since the gradual demise and eventual retirement of the former Houston Rockets star, Yao Ming.

Investors were quick to recognize the marketing bonanza. The market capitalization for the Knicks’ publicly traded parent company, The Madison Square Garden Company, added about $250 million in value in February alone, and has gained roughly $600 million overall since Lin’s first start.

But now that it comes time for the Knicks to actually pay Lin like a superstar, they seem to be balking. Reports in The New York Times and elsewhere suggest that they might not match the offer sheet that Lin signed with the Rockets, which would pay him $25.1 million over three years.

From a pure basketball standpoint, the merits of the deal are uncertain. Lin’s average salary under the contract — about $8.3 million per year — is concomitant with a good (although not necessarily great) level of performance over a sustained basis.

Using a statistic called estimated wins added, developed by ESPN’s John Hollinger, I charted the performance of the N.B.A.’s top 40 point guards over the past five seasons. Mr. Hollinger’s statistic (as its name implies) estimates the number of additional wins that a player is worth to his team, above a marginal-level player that could be picked up for the minimum salary.

Then I converted this number from wins into dollars based on the salaries of all N.B.A. players. On average, N.B.A. teams are paying about $1.63 million per win, which means that a player good enough to produce 10 extra wins for his team is worth about $16.3 million.

If Lin plays like a top-10 point guard, he’d be well worth the contract, even without the marketing bonus. A top-10 point guard is worth about 12 wins per season, according to Mr. Hollinger’s numbers, which is equivalent to about $20 million in market value.

That’s higher than the N.B.A. maximum salary, and for a good reason: true superstars in the N.B.A. are worth quite a bit more than what teams are allowed to pay them. Players like LeBron James might easily earn offers that topped out at $50 million per season in a true free market — and they’d deserve it based on how much value they add to their clubs.

A point guard ranking between 11th and 20th in the league — a solid starter, but not an All-Star or superstar talent — is worth about $10 million per year, according to these numbers. By that measure, Lin would still earn his contract, based on his on-court contributions alone.

However, the deal would be a poor one if he ranked in the bottom third of N.B.A. starting point guards — and a worse one if he were no better than a talented reserve off the bench.

Where Lin will fall along this spectrum is anybody’s guess. His prolonged hot streak in February and March was indicative of superstar talent. But this must be weighed against the decline in his performance later in the year, when he was closer to a league-average player — and perhaps the fact that, until his breakout in February, he was somebody whom nobody had bothered to draft or wanted to keep on their roster.

Then again, Lin was just 23 years old last season. By all accounts — not just the stereotype of an Asian-American from Harvard — he is a quick learner and wants to devote himself to patching the weak spots in his game.

Sports franchises often fear uncertainty, or they perceive it wrongly. During the past decade or two, under the tenure of their owner James L. Dolan, the Knicks have frequently paid top dollar for brand-name players who seem to have proven their worth. Yet, these veteran players have often struggled with age and injury, their contracts becoming white elephants. What seems like a risk-averse strategy really isn’t
— it’s just that all the risk is to the downside.

To be sure, there are also risks with Lin. If he proves to be no more than a marginal player — or if he gets hurt — then those jerseys will stop selling. Few T.V. sets in New York’s Chinatown or Flushing — let alone in Taipei or Shanghai — would be tuned in to see him come off the bench.

Moreover, because of the N.B.A.’s punitive luxury tax provision, the deal is a lot more expensive to Mr. Dolan than it seems on the surface. Under the league’s rules, the Knicks might face roughly an additional $35 million, or more, in luxury taxes on top of Lin’s salary.

It is not quite clear that Lin’s contract alone should be thought of as responsible for this — the bloated contracts given to players like Stoudemire also contribute to the Knicks’ tax burden. Nevertheless, the cost of bringing Lin back might be at least $60 million over three years, or $20 million per season.

But the upside is just too much to pass up. If Lin does perform like a top-10 point guard, he’ll be worth his salary based on his on-court contributions alone.

Even if Lin is a merely good player, the marketing boost he provides should more than justify the expense. Lin is already a superstar based on his jersey sales, and the level of fan interest that he generates. The number of Google searches for Lin’s name over the past six months exceeds that of LeBron James — and is about four times as many as those for Anthony, Stoudemire and Chandler combined.

This is a case, moreover, where it makes sense for the Knicks to pursue a high-risk strategy. As presently constructed — without Lin on the roster — they appear to be about a 50-win team. That would usually correlate with a fifth or sixth seed in the Eastern Conference, and an exit within the first two rounds of the playoffs. The N.B.A., unlike the N.H.L. or Major League Baseball, is a league in which skill tends to prevail. Merely being good, and then hoping to get lucky in the postseason, just does not work very often.

And the Knicks would have to share the spotlight. Their new crosstown neighbors, the Brooklyn Nets, also look to have about a 50-win roster — but the Nets are a younger team with fresher branding that might start to steal their headlines and ticket sales.

But if Lin plays even 80 percent as well as he did in February, the Knicks could have a 55- or even 60-win roster. Winning a championship would still be a feat, with dominant teams like the Miami Heat and Oklahoma City Thunder in the league. But the Knicks would be on track to be a No. 2 seed in the Eastern Conference. They would also host many home playoff games and would have a puncher’s chance of bringing home their first N.B.A. title since 1973. The Nets might not be an afterthought like they were in New Jersey, but the Knicks would still be the toast of the town.

If the definition of insanity is trying the same process over and over and hoping for better results, Dolan’s strategy of locking in 30-something veterans to max contracts every year has been a little mad.

Linsanity was something different. As of late Monday morning, on the mere possibility that Lin might not be re-signed, MSG stock had lost about $50 million in market value — nearly as much as the salary and luxury tax that the Knicks would need to keep the dream alive for the next three years.

It might not work out, but the Knicks would be crazy not to try their luck.