Gallup is in the midst of releasing a series of data from the more than 350,000 interviews that it conducted over the course of its daily tracking in 2008. The first data they’ve released, on partisan affiliation, contains some sobering news for Republicans: 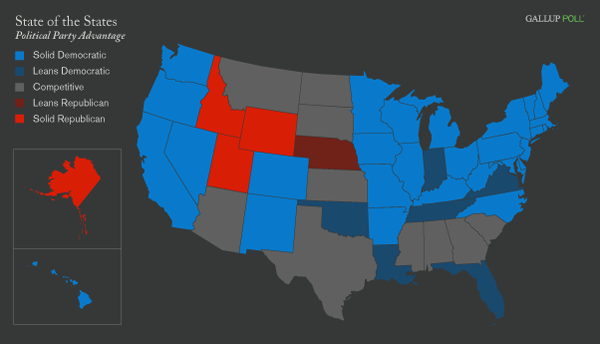 That’s right: just five states, collectively containing about 2 percent of the American population, have statistically significant pluralities of adults identifying themselves as Republicans. These are the “Mormon Belt” states of Utah, Idaho and Wyoming, plus Nebraska, plus Alaska. By contrast, 35 states are plurality Democratic, and 10 states are too close to call.

Now then for a couple of caveats. Firstly, Gallup’s numbers consist of interviews with all adults — not registered voters, and certainly not likely voters. Depending on the particular application that we’re using this data for, that may be helpful or unhelpful. What this perhaps indicates, however, is that even after all the millions of new voters that the Democrats registered and brought to the polls in 2008, there are still probably some marginal gains to be had, particularly in areas like the deep South that the Obama campaign did not really concentrate in.

Secondly, these totals include “leaners” — independents who lean toward one party or another, but don’t identify themselves as such. This tends to increase the Democratic margin by a couple of points.

Thirdly and perhaps most importantly is a point that both Michael Barone and I have raised at various times: one consequence of the Democratic coalition being larger, particularly as it tends to include a miscellany of groups that don’t always see eye-to-eye with one another (African-Americans, Hispanics, coastal liberals, union workers, young voters, etc.), is that it is more difficult to harness the entirety of that coalition in national elections. A Democratic presidential candidate from the North might have trouble appealing to voters in the South. A candidate from the South might have trouble appealing to voters in the North and West. A theoretic “generic Democrat” might have a chance at a rather large majority — but a “generic Democrat” is an abstraction, and most real Democrats will offend the sensibilities of some or another region. In Barack Obama’s case, these were voters in Appalachian and “Highlands” states like West Virginia and Kentucky, states that remain highly Democratic at the state level but which have not recently voted for Northern presidential candidates.

Still, for things like gubernatorial elections and elections to the Congress, the Democrats’ upside is very high, particularly if the party is smart enough to tolerate and accommodate a diversity of opinions within its umbrella. If party affiliation stays close to what it was in 2008, then giving the seats that are up for election, Democrats could very easily pick up another another 5-7 Senate seats in 2010, giving them not just a filibuster-proof majority but also a nearly veto-proof one. Party affiliation probably will not remain that way — there is typically a shift back to the non-incumbent party after the Presidency changes hands — but if it does we’ll have a very blue Senate. In the House, by contrast, Democratic upside is limited by the presence of hugely Democratic urban and majority-minority districts, which suck up Democrats from the surrounding areas. The real fight in the House may be the redistricting that takes place after 2010 and not the 2010 election itself.