On Thursday, former Secretary of Housing and Urban Development Julián Castro finally called it quits. Castro’s campaign had been on the rocks for some time now — in late October, he even threatened to drop out if he didn’t raise enough money to make the November debate — but after missing that debate and the December one, it seems as if Castro has finally determined there isn’t a way forward for him.

As I wrote back in January when Castro announced he was running for president, he was always something of a long-shot candidate. He’d been out of the political spotlight after his two-and-a-half-year term as President Barack Obama’s housing secretary ended, and his candidacy may have been overshadowed by that of former Rep. Beto O’Rourke, who also hails from Texas. But what Castro did have going for him was an inspirational personal story about rising out of poverty to eventually become the mayor of San Antonio, one of the country’s largest cities. Also as a young (45-year-old) Latino, he had the potential to win over Hispanic voters and younger voters. He even ran unabashedly to the left on issues like immigration, pushing the Democratic Party to engage with ideas like decriminalizing unauthorized border crossings. But unlike some other candidates, such as former South Bend, Indiana, Mayor Pete Buttigieg or even Sen. Kamala Harris, Castro never found his footing. As the chart below shows — he languished at 1 or 2 percent nationally. 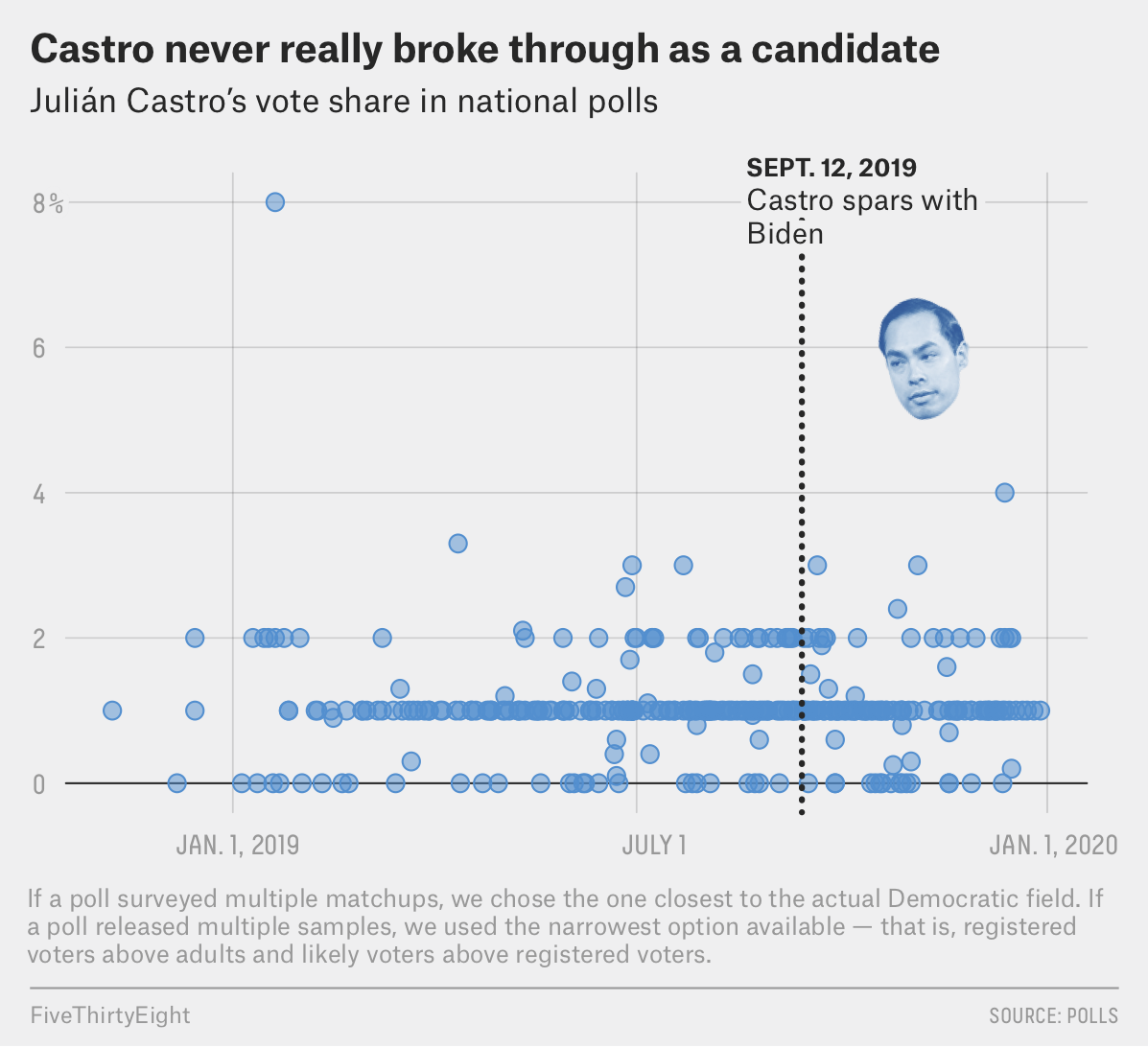 Part of the reason Castro might not have been able to break out in the polls was because of an exchange he had with former Vice President Joe Biden in the September debate. Castro attacked Biden on health care, accusing him of not working to insure every American and forgetting something he had said only minutes earlier — a clear shot at Biden’s advanced age — but as it turned out, Biden hadn’t said what Castro claimed he said.

Castro’s net favorability rating (favorable percentage minus unfavorable percentage) had improved markedly after the first debate, in which he had a heated exchange with O’Rourke over immigration, but this time his attacks on Biden backfired. In FiveThirtyEight’s polling with Ipsos, primary voters gave Castro the lowest September debate performance rating of the 10 candidates on stage. And his net favorability rating tumbled, going from +20 before the debate to just +10 afterward.

Tellingly, Castro only made one more debate after September — the October debate — he missed out on both the November and December ones. However, he always managed to meet the Democratic National Committee’s donor thresholds — amassing the 165,000 donors needed for November, and the 200,000 for December. In fact, when Harris dropped out of the race in early December, Castro was able to attract some of her supporters by arguing that she was held to a double standard by the media. It was reportedly Castro’s best fundraising day of the quarter, and it did help him reach 200,000 donors, but there was no sign of a polling surge. In the end, Castro failed to get a single qualifying poll for either the November or December debates, and he probably had even less hope of picking up a poll to make the stage in January, where the thresholds are even higher.

Considering his poll numbers, Castro’s exit doesn’t come as a shock. But it does reduce the diversity of the Democratic field, which was once heralded as the most diverse ever. It’s hard to imagine that this is the final chapter of his political career, though. Castro is still fairly young, and as Sen. Elizabeth Warren said on Twitter, she expects him “to be a leader in our party and our country for many years to come.” And having been a contender for the 2016 vice presidential nomination, it wouldn’t be all that surprising if the 2020 Democratic nominee ends up considering Castro for that job, too. (Maybe Warren herself.)