After an absolutely scorching first three rounds of the 2015 Masters, 21-year-old Jordan Spieth shot a 2-under-par 70 Sunday to finish off his first major championship victory. Giving the performance even more historical import, Spieth’s 72-hole score of 270 — 18 strokes under par — tied Tiger Woods’s 1997 record for the lowest score in the tournament’s long history. It was undoubtedly one of the most dominant performances ever seen at Augusta National.

But was it the most dominant? Relative to the field, probably not, because not all 72-hole scores are created equal.

When Woods shot his 270, the average player to make the cut in the Masters shot a 3-over-par 291, which ranks 31st-lowest out of the 79 Masters staged since the tournament began in 1934. Woods’s score, then, was 21 strokes better than the field average for players who completed all 72 holes, the fourth-best mark relative to the field in Masters history. (No. 1 was Cary Middlecoff, whose 279 was 24.8 strokes better than average in 1955, two years before the tournament instituted a 36-hole cut.)

In 2015, the field averaged a 72-hole score of 285.6, 2.4 strokes better than par — the third-lowest average in tournament history — meaning the typical player in this year’s Masters took 5.4 fewer strokes than in Woods’s record-setting year. In turn, Spieth’s 270 was only 15.6 strokes better than the field average, a mark that ranks just 42nd among 72-hole scores since 1934.

In fairness to Spieth, 37 of the 41 players ahead of him on that list put up their scores before the Masters started cutting the field down after 36 holes in 1957. Before that, scores such as Charles Kunkle’s 340 in 1956 polluted the overall field averages, making top-of-the-leaderboard performances look far better by comparison. But even if we limit our sample of tournaments to 1957 and later, Spieth’s -15.6 mark relative to the field ranks fifth-best, trailing not only Woods’s in 1997, but also Masters wins by Raymond Floyd, Jack Nicklaus and Phil Mickelson: 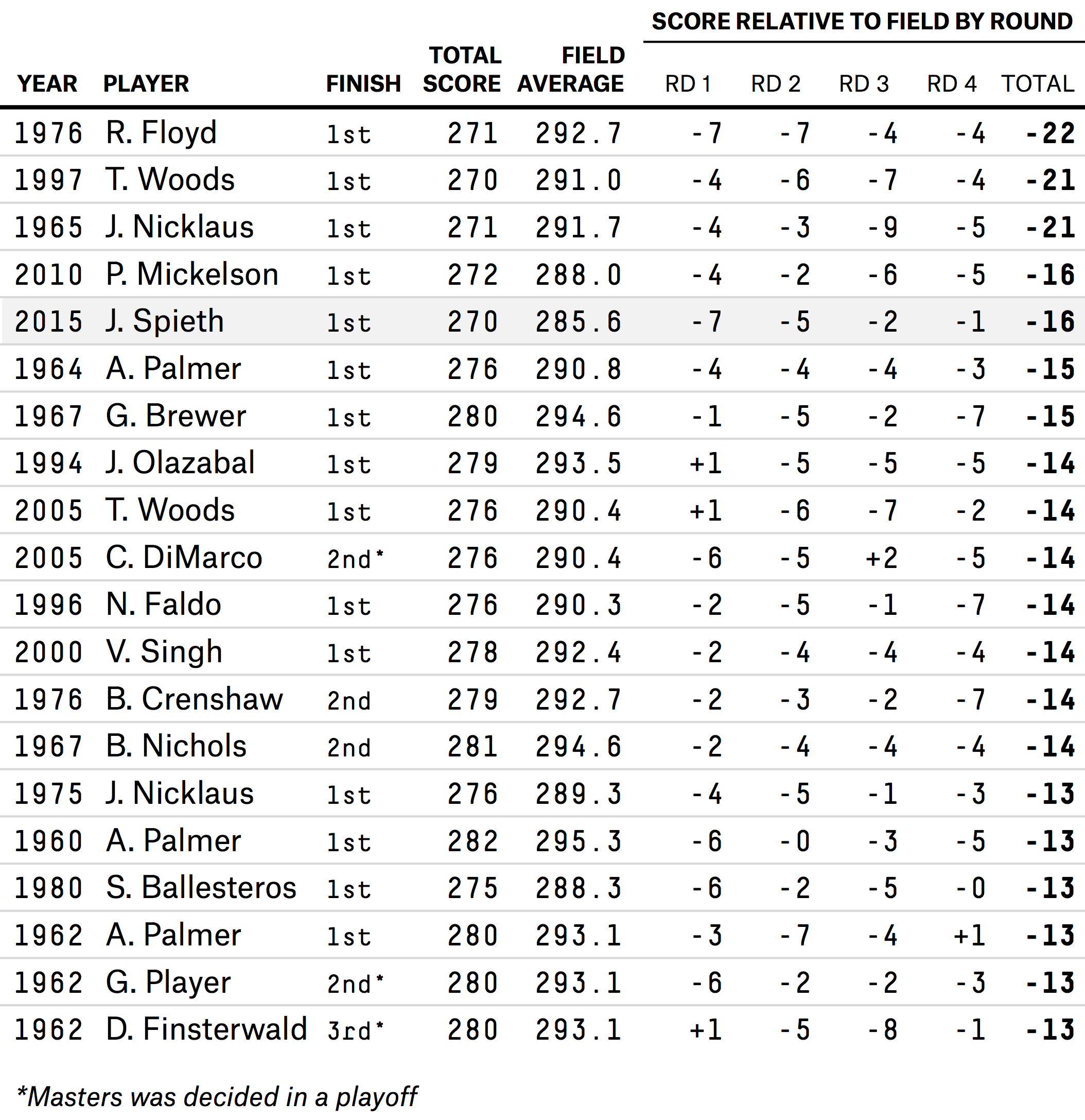 The rest of the field was so good this year that a record four players shot 11-under-par or better, and 58 percent of all players who made the cut broke par. Even without including Spieth’s 270, the rest of the field averaged a score of 285.9, the third-lowest 72-hole average for non-winners since 1957:

This doesn’t take much shine off Spieth’s week at Augusta, of course. He’s only 21, the same age as Woods in 1997; Nicklaus was 25, Floyd was 33 and Mickelson was 39 when they posted superior performances relative to opponents playing the same course under the same conditions. But as long as par isn’t what the typical player shoots, the field average should always be taken into account when comparing scores across tournaments and eras — and in Spieth’s case, that slightly lowers the historical significance of his 2015 performance.