Here we go again: So-called “Tax Freedom Day” is this week, occasion enough for Jonah Goldberg to fret publicly in the pages of USA Today about how tyrannical–not quite at the level of slavery, but pretty darn near or somehow approaching that–America’s tax system is. Problem is, by his logic, much of the free world isn’t very free because so many of those countries tax their citizenry at much higher rates than we do.

Goldberg opens his column with this:

Congratulations! This is your last week working for the man — at least for this year. The Tax Foundation calculates that Tax Freedom Day for 2010 is April 9, which means that by Friday, Americans will have spent nearly 100 days working just to pay their taxes. If Democrats have their way, Tax Freedom Day will keep getting later and later.

Hold that thought. Imagine for a moment that Tax Freedom Day was Dec. 31. In other words, picture working 365 days a year for the government. Now, the government would “give” you a place to sleep, food to eat and clothes to wear, but all your income would really be Washington’s income to allocate as it saw fit. Some romantics might call this sort of arrangement “socialism” or “communism.” But another perfectly good word for it is “slavery” or, if you prefer, involuntary servitude.

Now, no one is proposing any such arrangement. But it’s an important point conceptually.

Is it an important point conceptually, Jonah? Does paying a little over a fourth of the nation’s GDP into federal and state treasuries make us all one-fourth slaves? This is about as logical as saying the girl who let her high-school boyfriend get to “first base” last night is now one-fourth pregnant–you know, conceptually.

First of all, according to the Organization for Economic Cooperation and Development, depicted below are the tax revenues as a share of GDP (2006 data) for all member OECD countries: 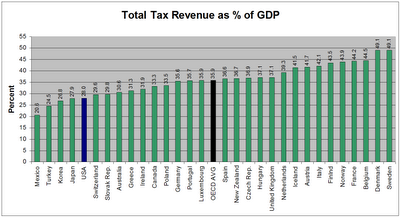 Note that America isn’t the lowest, but we are fifth lowest and our share (28 percent, which includes state/local taxes) is 20 percent lower than the OECD average of about 35 percent. Now I remember why I hate traveling through Europe: It’s the widespread slavery that so offends.

Goldberg concedes that he knows that federal taxes as a share of GDP in America have held steady since 1950 at around 20 percent. OK, so what he must really be upset about is how that tax bill is distributed, right? Yes, he carps that those with the highest incomes pay a disproportionate share. But that doesn’t mean income taxes account today for a higher share of GDP than they did in the past. 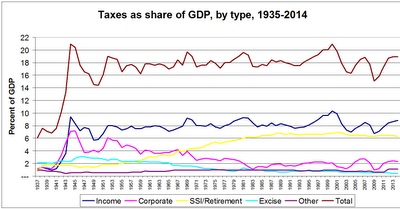 And in fact, as the data above from the Tax Policy Center show, income taxes as a share of GDP have held steady during the same time period. Corporate and excise taxes, paid mostly by businesses and which conservatives complain are inefficient and simply passed through to consumers anyway, have gone down as a share of that 20 percent. What’s gone up are payroll taxes which fund programs like Medicare and Social Security that the same tea partiers were warning Obama and congressional Democrats not to touch in the same breath they were complaining about the socialist expansion of the healthcare system.

Goldberg says he “bring[s] this up because many in the Democratic Party and in the news media have a hard time understanding what the ‘Tea Party’ crowd is talking about when it complains of incipient tyranny and intrusive government.” Yes, many of us do, including that uber-Democratic media maven and former Reaganite Bruce Bartlett, who surveyed tea partiers and discovered they have no idea what the true tax burden in the country is. Their average response for what share of GDP goes into the (federal) public sector was 42 percent–more than twice what it actually is.

So, conceptually, this would be like asking a pack of tea partiers who by chance met Kareem Abdul Jabbar during one of their Washington rallies to estimate his height, and their average answer came back “14 feet tall.” Of course, that presumes they’ve gotten a look at Kareem. But, worse, let’s assume tea partiers never bothered to educate themselves about human height or how to measure it (translation: tax policy and data) before they got on the bus for Washington. When asked to estimate Kareem’s height, even though they’ve never seen him–or for that matter any human who is 14 feet tall–their uninformed average answer still would come back at “14 feet.” I wonder, Jonah, how these folks ever got the idea in their head that government was twice as big as it is?

Tax Freedom Day is this Friday. But what we really need is Tax Education Day.