If John Isner could start the year like he finishes it, he would have hundreds of thousands of dollars more in prize money, a new shelf of trophies and a better chance all year of challenging the Big Three of Rafael Nadal, Novak Djokovic and Roger Federer. But despite his best efforts, Isner still hasn’t mastered how to start a season well. 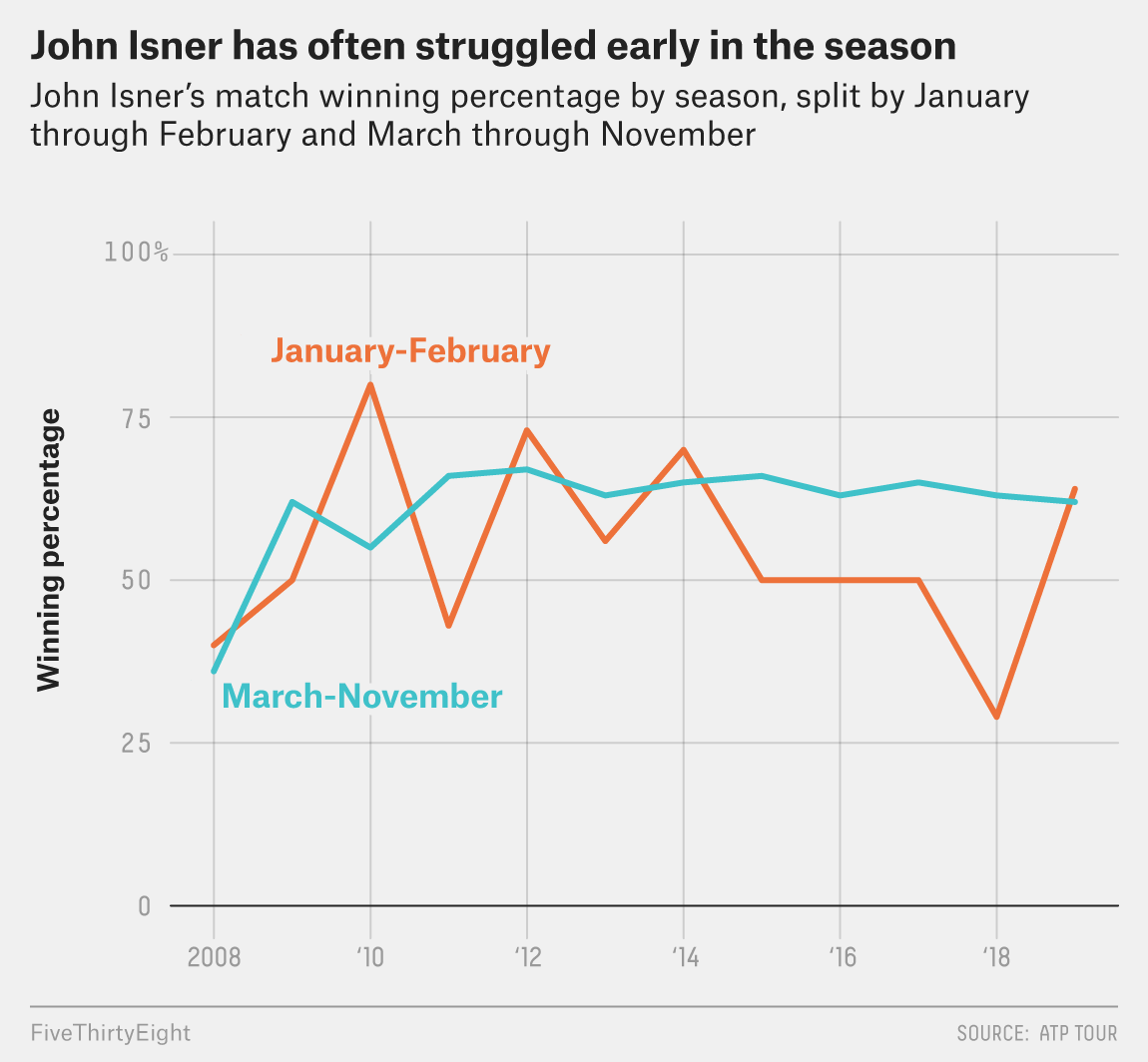 Isner is aware of his poor starts, and he’s worked to fix the problem. But since he almost always holds serve and rarely breaks serve, his matches often come down to tiebreakers, where one errant shot can cost him the set and therefore the match.

In those tight moments, confidence plays an outsized role. But many players, including Isner, gain confidence primarily from playing and winning matches. Without that experience, which he lacks at the start of every year, he struggles.

“My matches, as everyone knows, can be inherently close, and so playing a lot of matches, that sort of gets me tougher in those big moments, where the match may just come down to a point here or there,” Isner said. “Matches are matches, and you can practice all you want. We all practice so hard, and we practice a lot. But you can’t emulate matchplay out there.

“If I’m playing with not so much confidence, I can very easily lose a lot of close matches, a couple weeks in a row, three, four weeks in a row.”

Isner has had bad streaks like that, such as in 2018, when he went 2-5 in January and February. Three of the five losses were decided in the final set.

Isner began 2020 poorly at the ATP Cup, losing all three matches as the U.S.’s No. 1 player at the inaugural team event. But he rebounded in Auckland, going 2-1 and making the semifinals of the lower-level ATP event.

In Melbourne, he is through to the third round of the Australian Open. In the first round, the 19th-ranked Isner beat unseeded Thiago Monteiro of Brazil in four tiebreakers, and in the second, he dispatched of Chilean qualifier Alejandro Tabilo in straight sets. Isner will now face 15th-seeded Stan Wawrinka, who won the event back in 2014.

Late in his career, Isner has been achieving all sorts of milestones that eluded him earlier. In 2018, for instance, he made his first Grand Slam semifinal at Wimbledon and qualified for the year-end ATP Finals for the first time.

Can this year be the first in which Isner advances beyond the fourth round of the Australian Open? If he does, he might just turn the tide of his terrible season starts.