On Friday, despite being just days away from the Iowa caucuses, John Delaney announced that he’s calling it quits. The timing of his dropout is somewhat curious, too — not because he had a serious chance of winning Iowa (far from it) — but because he had made visiting Iowa (all 99 counties, in fact) a cornerstone of his long shot, quixotic bid that he first launched way, way back in July 2017. (No, that’s not a typo.)

In his announcement to withdraw, Delaney said that his decision rested on “internal analyses” that suggested he would not meet the viability threshold — typically 15 percent — at most caucus sites, but that he might get just enough support to keep other more moderate Democrats from reaching that mark.

That last point is debatable, because it’s not clear how many Iowans would have backed Delaney in the first round of voting, but it doesn’t take much digging to see he was coming up short in Iowa — our Iowa polling average put him at less than 1 percent yesterday — and as you can see in the chart below, that’s where he languished for much of his presidential run. 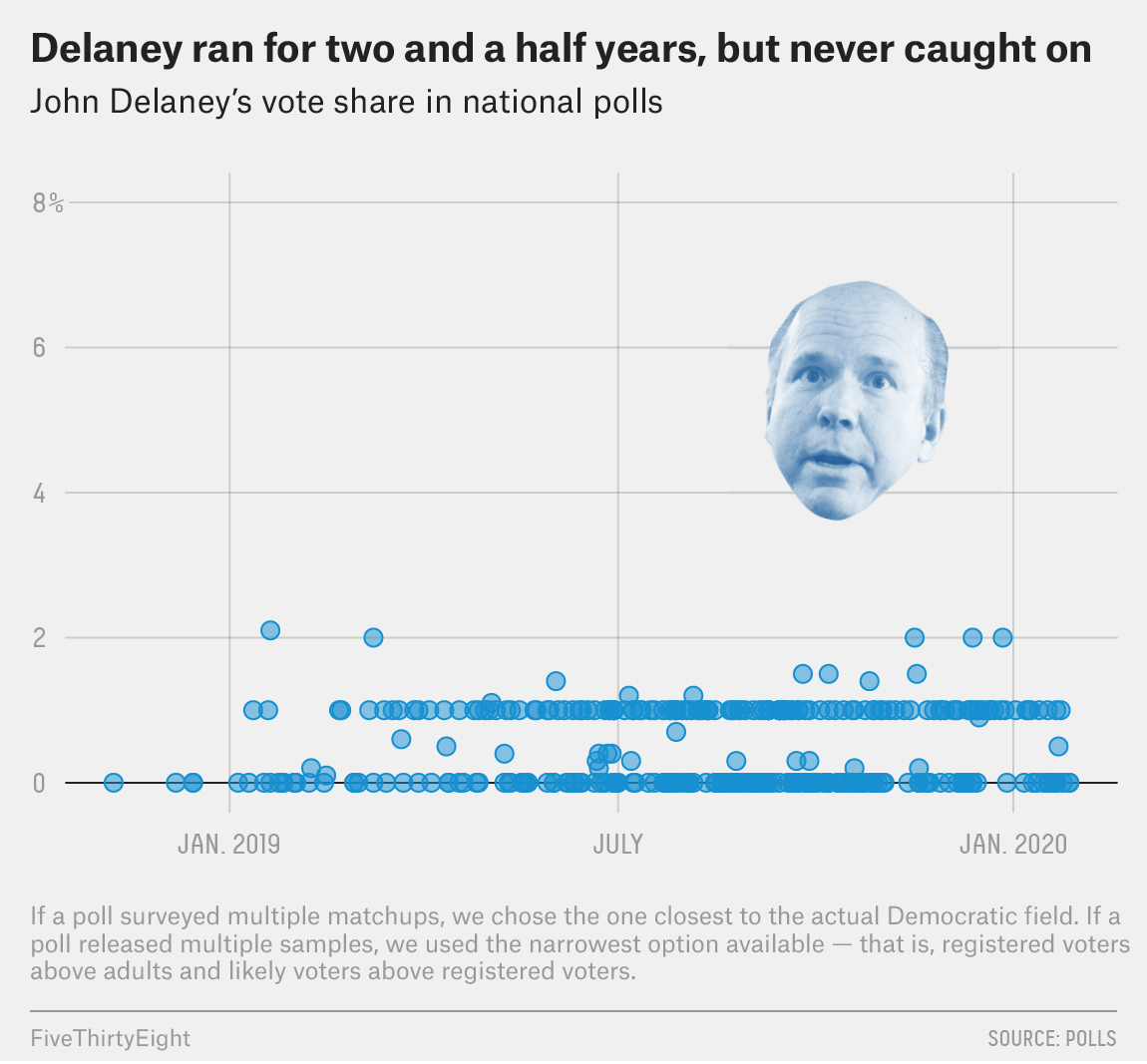 In fact, most Democratic voters didn’t even know who Delaney was. In a recent average of national polls that asked Democrats and Democratic-leaning voters whether they had a favorable or unfavorable opinion of the candidates, less than 40 percent of Democrats knew enough about Delaney to have an opinion of him. (This was also true of other long shot candidates like Sen. Michael Bennet and former Massachusetts Gov. Deval Patrick.)

Delaney did have millions at his disposal to self-fund his bid, which probably helped him stay in the race longer than some other also-rans, but unlike billionaire former New York City Mayor Michael Bloomberg and billionaire activist Tom Steyer, his ample cash reserves didn’t help him make headway in the race. But like Bloomberg, he was running as a moderate candidate. In fact, Delaney’s attempt to contrast himself with the progressives in the field during the second Democratic debate in July maybe gave him his one big “moment” in the race. It ultimately didn’t help his poll numbers, but in that debate he got a lot of airtime attacking the Medicare-for-all health care plans of Sens. Bernie Sanders and Elizabeth Warren, illustrating a major division between the moderate and progressive “lanes” of the Democratic Party.

Delaney’s campaign arguably never had much of a shot, but his candidacy does reflect the wide-open, “why not me” view that has defined much of the 2020 campaign with its historically large field. But at just 56 years old, this probably isn’t the end of Delaney’s political career. Even before he decided to run for president he was mentioned as a possible candidate for the 2018 Maryland gubernatorial race, and reports suggest that he’s now eyeing a 2022 run there.

Which Democratic candidate had the biggest surge in popularity?