Before the NCAA men’s basketball championship game, I pointed out that Connecticut was unusually accurate from the free-throw line this season, ranking fifth of 351 teams in Division I. Then the Huskies did even better, hitting 10 of 10 free throws to help them defeat Kentucky 60-54 on Monday to win the national title — and finish the season ranked fourth in free-throw accuracy.

Kentucky, meanwhile, hit just 13 of 24 free throws. It was Kentucky coach John Calipari’s fifth-straight NCAA tournament loss in which his team’s missed free throws were greater than the final margin. (I’m counting the 2008 overtime title game, in which Calipari’s Memphis squad missed four of five free throws in the last 90 seconds of regulation.) Asked after the loss Monday whether misses from the foul line cost his team the game, Calipari said, “Well, you could say that,” before putting most of the blame on the Wildcats’ poor start.

Calipari has a long, bumpy relationship with the charity stripe. At Memphis, he tried visualization techniques and extra practice. Those didn’t work. He told players to stop practicing free throws. That didn’t work either: Misses helped cost the Tigers the national title game against Kansas, so he reinstated extensive free-throw practice.

Calipari’s teams have ranked in the bottom half of Division I in free-throw accuracy in 12 of his 14 seasons as a head coach at Memphis and Kentucky.

Rankings aren’t readily available for his earlier stint at Massachusetts, but there, too, free throws were a common topic of news articles about the Minutemen. In December 1994, the team missed 11 of 21 free throws in a loss to Kansas, and Calipari tried to get the scorers to revoke one of the Minutemen’s makes because it banked in off the backboard. (“We don’t take banks,” Calipari said, according to the Boston Herald.)

Earlier that year, after his team missed 11 of 25 free throws while beating St. Joseph’s in the Atlantic 10 tournament quarterfinals, Calipari said, according to the Herald: “When the game was in the balance we made them all, bang. I’d rather they made them that way than if we made them all until the time we need them.”

That’s been a common refrain in Calipari’s comments about free throws: His players make them when they count. And that was true early in his career: Five of his first six NCAA tournament teams — at UMass and Memphis — shot better from the line during the tournament than they did during the regular season. But either that was a fluke or a product of the players he was coaching at the time, or his postseason magic has worn off. Since then, six of Calipari’s nine tournament teams — including this year’s — have declined in free-throw accuracy during March Madness. 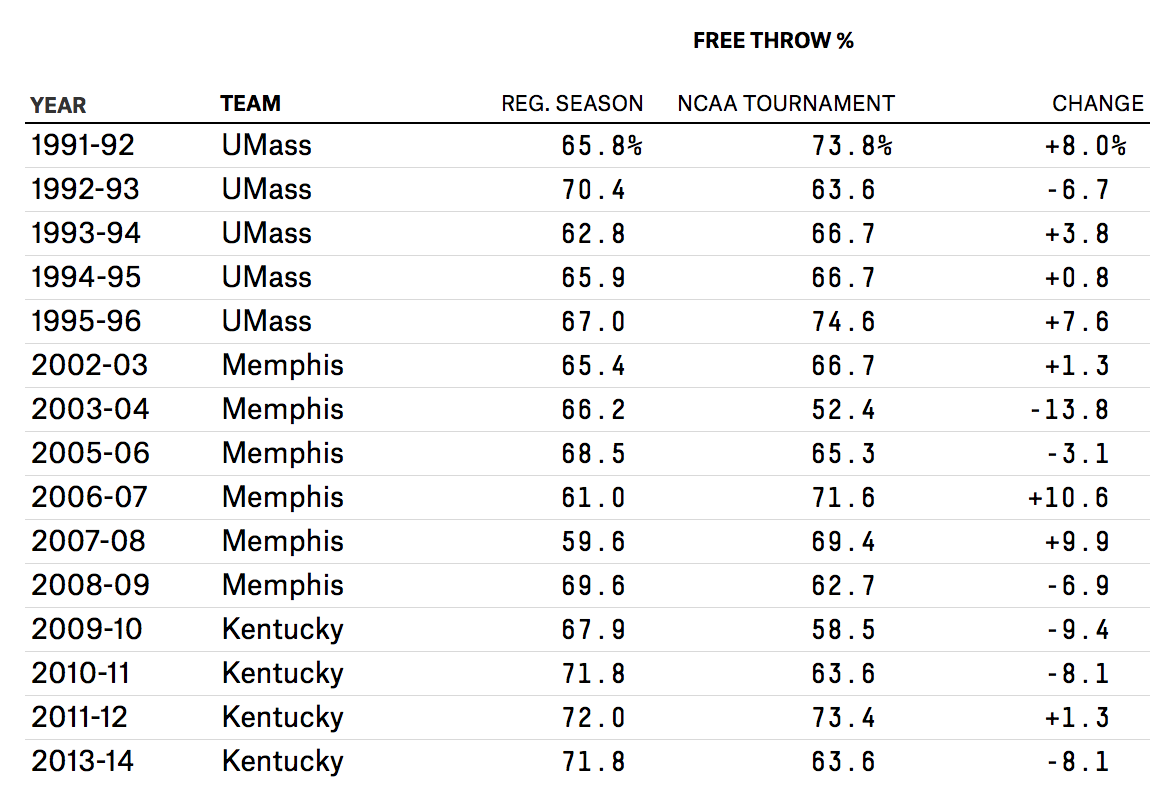 The average change of a Calipari team’s free-throw percentage come tournament time is essentially zero: a drop of 0.8 percentage points.

Three factors appear to contribute to Calipari’s teams’ woes at the free-throw line:

1. He often inherits players who struggle from the line. His first three UMass teams each had a higher free-throw percentage than the Minutemen had in each of the three prior seasons. His first three Memphis teams were about as good or better as the Tigers’ free-throw rate in two of the three years before he took over.  Only at Kentucky did he inherit a program with strong free-throw shooters: The Wildcats ranked sixth in the nation in accuracy the year before Calipari took over, then fell to 243rd in his first season.

2. Some players shoot worse under Calipari than they do under other coaches. I found 19 players who shot at least 40 free throws under Calipari and at least 40 under another coach at the same program. On average, their free-throw shooting was 2 percentage points less accurate under Calipari. The sample size is small, though it’s notable that 12 of the 19 players played with Calipari later in their careers, so he would have benefited from any of their natural improvement with experience and age. 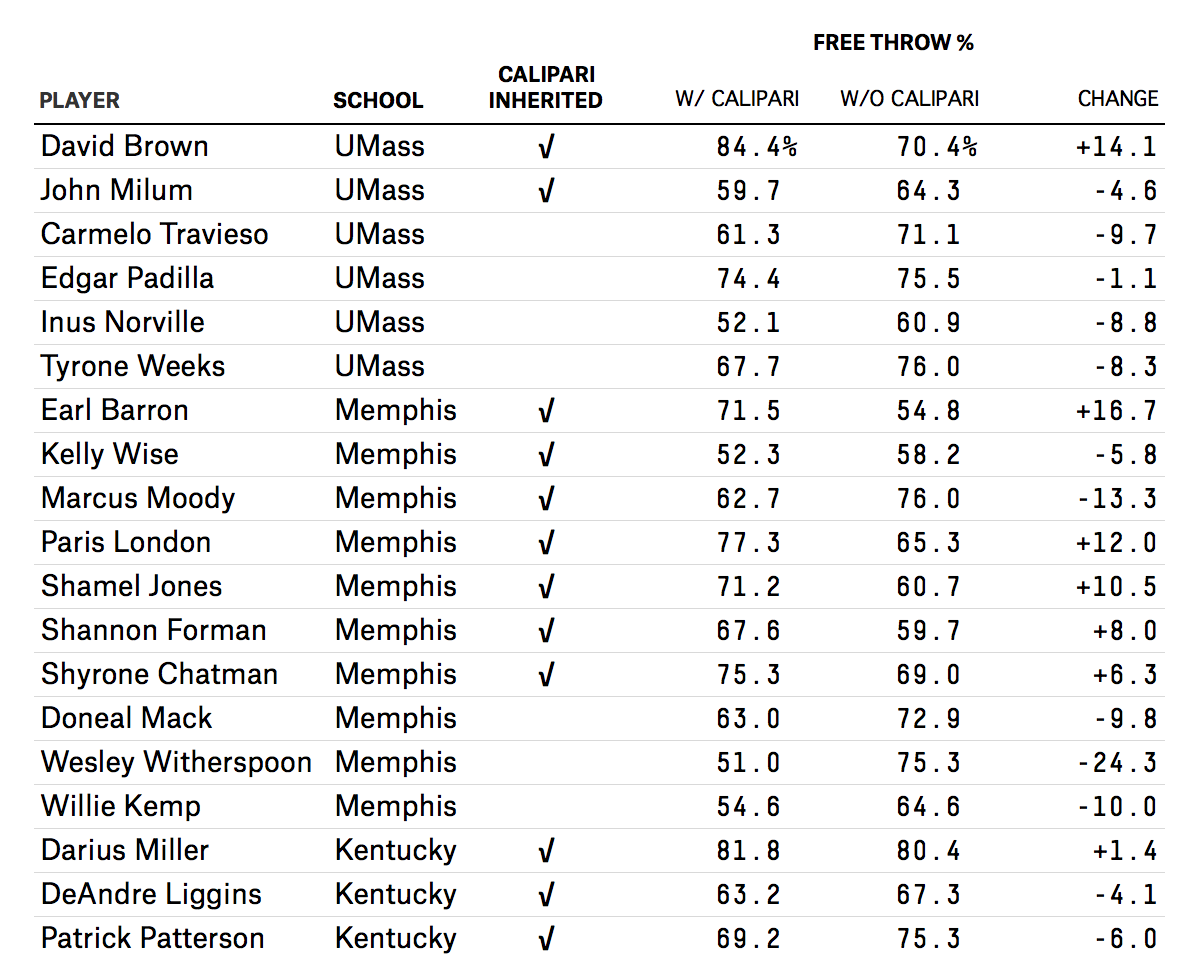 Calipari has experienced tournament success despite his players’ missed free throws. Lately, though, those misses often have cost him in the season’s final game.