LSU quarterback Joe Burrow is in the midst of one of the most prolific starts to a season by a player at his position in program history. His celebrity has ascended to such heights that when the Tigers visited Austin earlier this season, Texas Longhorn fans fired a cannon through his jersey.1

The senior — the outsider with the James Dean aura, close-cropped hairdo and swagger of a ruthless pageant queen — has electrified a long-dormant LSU offense infamous for misbegotten schemes, an unwillingness to adapt to the times and an inability to uphold its end of the bargain. There’s a generation of college football fans who know LSU’s offense to be more house cat than apex predator, who associate the Tiger defense with a tourniquet trotted out to save their listless brethren. Under former head coach Les Miles, the Tiger offense had routinely underperformed relative to its 5-star talent.2

But this season, head coach Ed Orgeron’s pregame tradition of punching himself repeatedly in the face is apparently paying off. The Tigers are undefeated and firmly in the College Football Playoff picture, with a 23 percent likelihood of reaching it, according to the FiveThirtyEight model.3 And much of their successful start is attributable to Burrow and the offense: LSU is tied for the best red-zone scoring attack, and it outright leads the nation in scoring and third-down success rate. More generally, the offense is tearing opponents to pieces.

A two-season backup at Ohio State,4 Burrow didn’t garner much Heisman attention this summer. And now? Less than halfway through the regular season, he is rewriting the school record book5 and is well on his way to being one of the first quarterbacks called at this year’s NFL draft. When his transfer was announced, the Bayou asked him to be its savior. Who could argue that he hasn’t delivered?

Orgeron had known that he needed to retool his offense, and he didn’t have to look far to find a solution. Prior to this season, the gravel-voiced head coach hired Joe Brady from the New Orleans Saints and installed the 30-year-old as his passing game coordinator.

Welcome to the “shotgunification” of the LSU offense, a process that started a few seasons ago and one that the new coordinator has only continued, albeit with some notable differences. Brady’s spread principles largely draw from run-pass options and three-receiver sets, and he favors disguising packages and a faster tempo that led the Tigers’ huddle rate to drop by nearly 50 percentage points from last season. 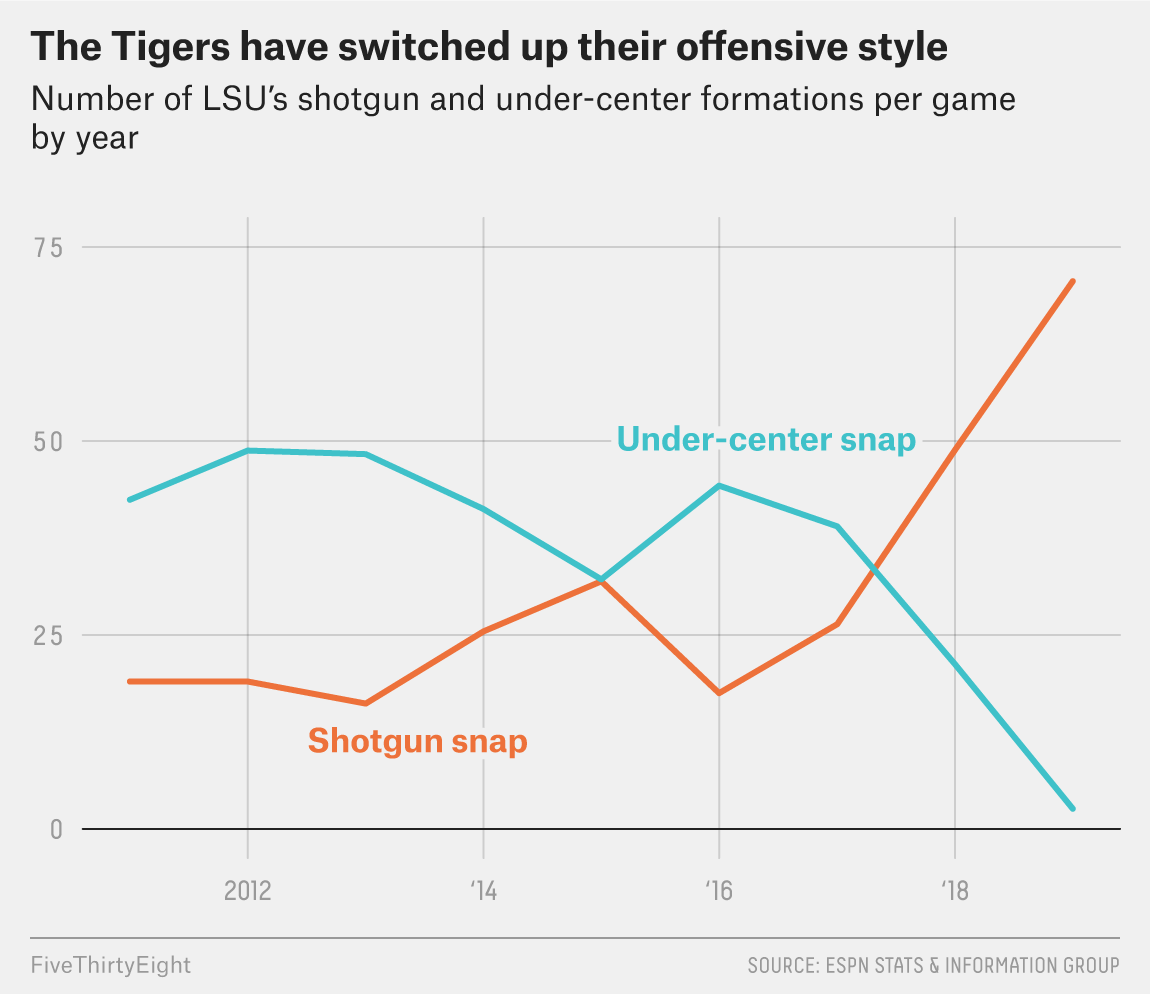 Burrow has been given free rein to let it fly, especially on first down. This is, of course, not the way things are traditionally done in Louisiana. From 2004 to 2018, the Tigers ranked 112th among 120 FBS schools in first-down pass percentage (35.4 percent). This season, they rank eighth.

And this systematic overhaul has proven fruitful. This season, only Oklahoma and Alabama are averaging more points per drive this year than LSU’s 3.87 — a remarkable achievement, given that LSU failed to crack the top 25 in that measure from 2014 to 2018. Over the past 10 seasons, LSU quarterbacks produced 2.09 expected points added on pass attempts per game, a mark that ranked 53rd nationally and ninth among teams currently in the SEC. This season, they’re producing 21.4, the third-best mark nationally.

And Burrow is the man engineering that success. Through five games, he’s averaging 372.8 passing yards per game, a full 14.4 yards better than any other SEC QB at this point in the season since at least 2004.

His throws are also typically right where they need to be. Burrow leads the nation in completion percentage (78.4). And when you adjust for throw aways and drops, only four QBs since 2011 posted a higher completion percentage through five games than Burrow’s 83.9. Two of those quarterbacks (Baker Mayfield and Robert Griffin III) won the Heisman in that given season.

When pressured by the defense, Burrow is completing better than 70 percent of his passes, whereas the national average is 44 percent. And under game pressure, Burrow is also unfazed: He is completing 83.3 percent of his passes in one-possession games. His ability to handle both was on display during this touchdown pass — in the fourth quarter of LSU’s win over Texas.

On 3rd-and-17 in the 4th quarter, Joe Burrow and Justin Jefferson did THIS. pic.twitter.com/uf95gKNdAp

The unanticipated rise of Burrow has the Tigers offense — and national media outlets — buzzing. Michael Bonnette, LSU’s communications director, told me in an email that in his 20 years at the job, only once had he fielded more interview requests from national outlets for a player at this point in the season.6

Historically, the offensive side of the ball — and particularly the quarterback position — hasn’t been kind to the Tigers.7 Excitement in Death Valley will reach a fever pitch if Burrow can lead the Tigers past a brutal upcoming four-week slate that includes matchups with Florida, Auburn and Alabama. If the quarterback can keep it up, his jersey may be too valuable for opposing fans to destroy.

The Red River Shootout is usually a game to circle on the college football calendar, but it’s seldom been bigger than in recent years. Last season’s version8 was an instant classic, with Oklahoma staging a furious comeback from down 21 in the fourth quarter, only to leave too much time on the clock for Longhorns QB Sam Ehlinger to drive into range for a game-winning field goal with seconds left. Although the Sooners no longer have Heisman Trophy winner Kyler Murray, they haven’t skipped a beat with Jalen Hurts as his replacement. Although Texas’s playoff odds were hurt by their Week 2 loss against LSU, they still have a 5 percent chance now — and a great chance to play spoiler against the Sooners, whose playoff probability would fall from 46 percent to 22 percent with a loss here. Our model gives OU a 72 percent chance of surviving, which would bolster their playoffs odds to 56 percent. But according to our Elo ratings, the Longhorns are the toughest team the Sooners have faced — or will face — during this whole regular season.

CORRECTION (Oct. 10, 2019, 4:55 p.m.): The nickname given for LSU’s home stadium was incorrect in a previous version of this article. It is Death Valley, not the Swamp.