As NBA players age and their bodies and athletic capabilities change, the best players adapt their approaches to remain the best. Whether that means adding new skills to their game or leaning more heavily into lesser-used abilities, the need comes for every player who lasts long enough in the league. Adaptation, though, doesn’t necessarily mean diminishment. Some players, similar to wine finding its bouquet only with the dissipation of tannins from age, discover their new styles to be superior. Such is the case with Jimmy Butler, whose Miami Heat are leading the Atlanta Hawks 3-1 in the first round of the playoffs.

Versatility is a skill, and Butler takes the concept of being able to do anything on the court to a new level. Though Butler has always featured the dimensions of a wing at 6-foot-7 and 230 pounds, he used to display more guard-like tendencies. Per Second Spectrum, he initiated more than 36 plays per 100 possessions as a handler in the pick and roll in 2016-17, which marked his career high and ranked 45th in the NBA among players who ran at least 500 of the plays. This year, he lost over a third of that pick-and-roll frequency from 2016-17, running just over 23 per 100 possessions. His propensity for jumpers — another traditional hallmark of guards — is also near a career low.

His burst both with the ball and into the air has lessened. He rarely flies past defenders on drives, ranking 230th in blowby percentage among 273 players with at least 100 drives. He rarely dunks, tying for 94th in the league this year. Yet the limits to his game haven’t limited his success.

Butler was more efficient on drives this season than in any year in which he had a higher blowby percentage. His accuracy at the rim is 1 percentage point lower than his career high, set last year. As Butler has aged, he has played more like a big on the offensive end. His rates of screen-setting and post-ups have never been higher. His effective field-goal percentage in “floater range” — the paint excluding the restricted area — after one or more dribbles was only average, but after zero dribbles, it was the second-highest in the league,1 meaning he’s at his best when teammates create his shots. At times, he seems more like an undersized big than a supersized guard, but his craftiness — early post-ups, cutting to the rim after ghosting a screen or delivering handoffs — compensates for his size.

Despite finding so much success as a big this season, Butler remains an effective ball-dominant initiator. His assist rate is still sky-high — it has been in the 93rd percentile or higher for his position every season since 2015-16 and was in the 96th percentile this year. After ranking third last season, he had the second-highest assist-to-turnover rate among high-usage players.2 His true shooting percentage has moved little, fluctuating between 56 and 61 percent every season since 2014-15.

In fact, while his style has shifted slowly over time, his impact has been remarkably consistent. Butler remains the star he was last year. He took an even higher share of his shots from the short midrange this year and drew a comparable rate of shooting fouls, per Cleaning the Glass. Not only is Butler consistent, but he has orchestrated consistency for his team.

He remains the foundation of a Heat team that returned only 56 percent of its minutes from the previous year — the sixth-lowest share in the league — yet kept its overall identity. The Heat continued to play a grindingly slow game, forcing opponents into the longest average time before shooting in the league and recording the seventh-longest time on the offensive end. They forced the third-highest rate of turnovers while taking and making a lot of threes on the other end. 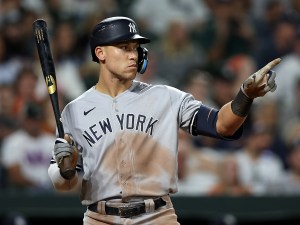 This Is The Season Aaron Judge Has Long Promised The Yankees

The Heat lost in the first round last season, but they upgraded the team around Butler this year and entered the playoffs as the No. 1 seed in the East. (Adding Kyle Lowry helps a team immeasurably.) Surrounded by a stronger supporting cast, Butler is in the midst of the best postseason run of his career, setting playoff per-game career highs in points (30.5), rebounds (7.8) and steals (2.8). Most NBA stars imprint themselves on the playoffs by averaging more field goal attempts.3 Butler is no different, averaging 5.8 extra shots per game in the playoffs. But the way he’s done more in the playoffs hearkens back to his addition of more big skills. Neither his pick-and-roll nor isolation frequency has shifted dramatically. Butler is adding as much off the ball, attacking more closeouts and setting more on-ball screens. He’s taking more than twice as many shots off of cuts per contest. And though he’s getting about the same number of touches per 100 possessions, he’s shooting more often — and scoring more efficiently — off of those touches.

The playoffs have supercharged the shifts to Butler’s game, which seems in turn to have supercharged his impact — his total playoff RAPTOR has never been higher. (That he somehow becomes a 3-point marksman in the playoffs doesn’t hurt, either — this is his third playoff run shooting over 40 percent from deep, a number he’s never cracked in a regular season.)

If Butler plays offense like a combination of a guard and a big, he’s no less versatile on defense. Four of his six most frequent defensive matchups in the regular season were initiating guards.4 Yet against the Hawks, he’s defended Kevin Huerter, Bogdan Bogdanović and De’Andre Hunter more often than he’s defended Trae Young. Per BBall Index, Butler recorded a career high in defensive versatility this season, spending almost equal time guarding every position except for centers, and his matchup difficulty was the 29th most difficult in the league. Whomever he guards, he is effective forcing both turnovers and misses; he was one of two players5 in the top 20 for both steal rate and limiting points per chance out of isolation.6

With Butler filling so many different roles, the Heat have outscored the Hawks by 59 points with Butler playing and lost his minutes on the bench by 2.

The necessity of adapting to your changing abilities is a reality of age, but the ability to do so (and to adapt to the changing circumstances of the playoffs) requires experience. Only 59 players in NBA history have played in 80 playoff games while averaging 18 points or more, and 52 are either in the Hall of Fame or at 90 percent odds or better to join in the future, according to Basketball-Reference.com. Butler seems to be on a Hall-of-Fame trajectory — he’s at 71 percent odds right now, and he stands to boost that if the Heat make a deep playoff run behind his malleable excellence. If he does reach the Hall, it’s not unreasonable to expect him to celebrate with a glass of wine. And like his favorite — Italian red blends — Butler just keeps getting better the older he gets.

Louis Zatzman is a freelance writer living in Toronto. He is a staff writer at Raptors Republic, a freelance contributor to CBC Sports and Sportsnet, and co-host of the weekly newsletter Minute Basketball. @LouisZatzman