Even an average N.B.A. player can have a great game. Within the past two seasons, players including Jordan Crawford, Hedo Turkoglu and Goran Dragic have recorded a triple-double. The Milwaukee Bucks’ Brandon Jennings scored 55 points in a game in 2009, nearly quadrupling the 15 points per game he scored on average that season.

But what about four great games in a row — especially when they coincide with your first three N.B.A. starts?

The New York Knicks’ Jeremy Lin has scored at least 23 points in each of his last four games, including 38 on Friday night against the Lakers. He has also recorded at least seven assists in each game, and he has been efficient, shooting at least 53 percent from the field each time.

Just how common is something like this? I searched basketball-reference.com for other streaks that were in the same general ballpark: players who scored at least 20 points, had at least six assists and shot 50 percent over a period of four consecutive N.B.A. regular season games.

It is an extremely impressive list. All but seven of the players made at least one All-Star appearance in their careers, with about two-thirds of them selected to the All-Star team multiple times. The list includes nine Hall of Famers — and a number of other players who are sure to make it once they retire. The players on the list account for 17 of the last 28 M.V.P. awards.

We can sort the players into six general categories, using their Elo ratings from basketball-reference.com as a guide. 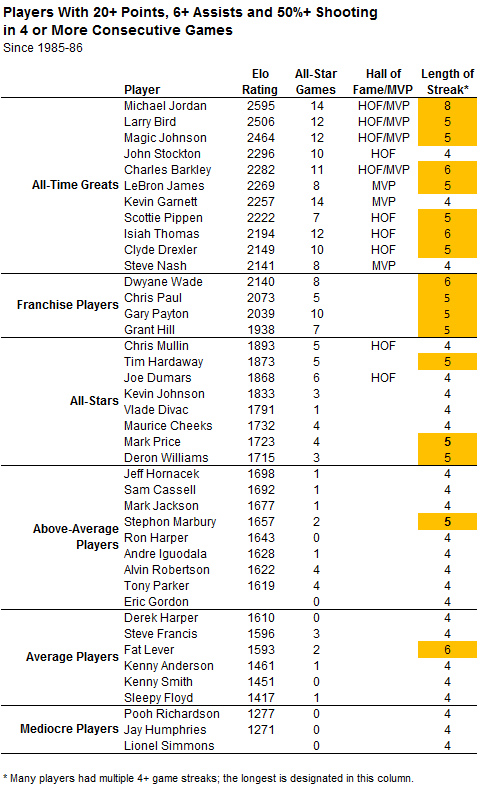 The first tier consists of 11 players that I call “All-Time Greats.” These are players who were either among the 50 Greatest Players in N.B.A. History, when the league announced that list in 1996, or who have won an M.V.P. award since then. It contains pretty much who you’d think — Michael Jordan, Larry Bird, Magic Johnson. It also includes Steve Nash, a player to whom some are comparing Lin.

The next tier consists of four “Franchise Players.” This includes players like Gary Payton, the former Seattle Supersonics point guard, who fall just short of immortality (or are too young to have achieved it yet), but who were probably good enough to lead a team to a championship.

In the third tier are the “All-Stars” — players who made the All-Star team about half the time during the peak of their careers, and who could win a championship if paired with a player of similar aptitude and a strong supporting cast. Two of these players, Chris Mullin and Joe Dumars, made the Hall of Fame, but most, like former Phoenix Suns point guard Kevin Johnson, fell just short of it.

Next up is the “Above Average” group — guys who had good overall careers and who might have made an All-Star team in their best season or two. Mark Jackson, the former Knicks point guard, is typical of this group.

Only 9 of the 41 players fall below this tier. Six of them, like the former Knick Steve Francis, fall into a group of average players.

Just three of them, meanwhile — Pooh Richardson, Jay Humphries and Lionel Simmons — were mediocre N.B.A. players even at their peak.

In other words, while it is possible that Lin will turn out to be the next Pooh Richardson, the odds are in favor of a more impressive outcome.

Basketball is much less luck-driven than a sport like baseball, especially for a point guard, who handles so many of the team’s possessions. A league-average point guard might be able to muster one streak like Lin’s over the course of his career. But it is more the hallmark of a player with at least borderline All-Star talent, if not more than that.

There are, however, two other factors pertinent to Jeremy Lin, one of which speaks favorably for him and the other less so.

The unfavorable factor is that absolutely nobody saw this coming. Lin was cut during the pre-season by the Golden State Warriors, and then again by the Houston Rockets, one of the more statistically savvy teams in the league. Lin had been undrafted out of college — that college was Harvard, by the way, where Lin had a G.P.A. of 3.1 and majored in economics.

While it must be acknowledged that talent evaluation is an imperfect science in sports — and that there may be some bias against an Asian-American from Harvard who does not fit the mold of a typical N.B.A. point guard — that is nevertheless a reason to expect some reversion to the mean. That doesn’t mean Lin is going to be the next Lionel Simmons, but it would weigh against a prediction that he will turn into a superstar.

On the other hand, these past four games aren’t just any four, picked out at random from a long career. They represent the first four times that Lin had ever played more than 24 minutes in an N.B.A. game and his first three career starts. In fact, the 89 points Lin scored in his first three starts is the most by an N.B.A. player since the league merged with the A.B.A. in 1976.

And Lin has scored his points in impressive fashion, slashing and driving to the basket and creating easy shots for himself. Were he just a streak shooter who had knocked down a bunch of 3-pointers, perhaps there would be more reason to be skeptical.

Lin has also received the endorsement of one of the players on the All-Time Greats list, Magic Johnson, who compared him to two of the others, John Stockton and Steve Nash, on ESPN’s telecast last night.

So perhaps the list of 41 players above is a roughly appropriate guide to Lin’s possible futures. That would imply that there was about a one-in-four chance that Lin really was going to be a superstar, and about a one-in-four chance that he was an average (or worse) player on an incredible hot streak. That would leave a 50 percent chance that he was somewhere in the middle — a clearly above-average player who would make several All-Star teams in his career.

It’s also worth watching to see whether Lin can extend the streak tonight against Minnesota. Only 17 of the 41 players had streaks that lasted for longer than four games, with many of the more marginal players dropping off the list.

And only five players had such a streak that lasted for six games or longer. Four of them are Michael Jordan, Charles Barkley, Isiah Thomas and Dwyane Wade. The other was less illustrious: Lafayette “Fat” Lever.