Jason Collins, who played for the N.B.A.’s Boston Celtics and Washington Wizards last season, on Monday became the first active male athlete in a major American team sport to publicly announce that he is gay.

Reaction around the league has been substantially supportive of Mr. Collins. Star players like Kobe Bryant, Steve Nash and Baron Davis have declared their admiration for him on Twitter — as has the N.B.A.’s commissioner, David Stern.

But Mr. Collins ended the season as a 34-year-old free agent who mostly came off the bench. How likely is he to find a job in the league next year?

I searched the basketball-reference.com database for players who had a similar season to Mr. Collins’s 2012-13 campaign. Specifically, I looked for players who were between age 33 and 35, who played forward or center, who played in 30 to 50 games, and who started five to 15 times. (Mr. Collins played in 38 games and started nine times for the Wizards and the Celtics last year).

Basically, we’re looking for other aging big men who mostly came off the bench, but who were deemed good enough to start on occasion.

The search identified 18 such players before last season; one of those was Mr. Collins after the 2011-12 season. How many of them played at least some minutes in the N.B.A. the following year? 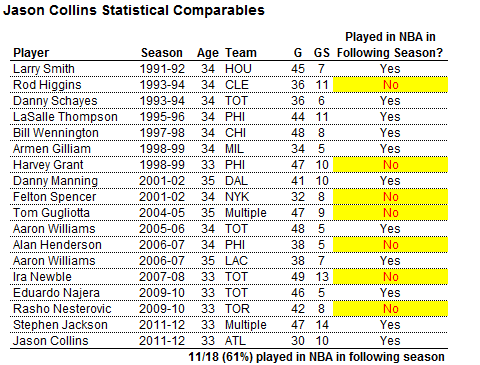 Eleven of eighteen did, or 61 percent. The odds have been slightly in favor of their extending their careers, in other words — but they are also treated as expendable commodities.

In some ways, that makes Mr. Collins’s decision to come out much braver. He would hardly have been guaranteed a job next year, regardless of his sexual orientation. If N.B.A. teams discriminate against him at all for being gay, that could keep him on the sidelines.

At the same time, this will represent only one data point. My concern is that if no team signs Mr. Collins, it may incorrectly be deemed as a referendum on whether the league is willing to employ an openly gay player — when players in Mr. Collins’s position see their N.B.A. careers end fairly often for all sorts of reasons.

Alternatively, if a team does sign him, it may be incorrectly dismissed as a publicity stunt — when 7-footers who can provide some rebounding and defense off the bench often play well into their thirties.

As a pure basketball decision, it looks like a pretty close call. Here’s hoping that the league will evaluate Mr. Collins on the basis of his basketball production and skills, and not his sexuality.

An earlier version of this post misstated the number of games Jason Collins played in during the 2012-13 season. It was 38, not 48.

A version of this article appears in print on 04/30/2013, on page B15 of the NewYork edition with the headline: An Aging Big Man’s Chances To Hang On.