There was no better pitcher in Major League Baseball over the last two seasons than Jacob deGrom,1 and in this shortened season he had taken his performance to another level. The New York Mets’ ace entered play Wednesday ranking first in the NL in ERA (1.67) and second among pitchers in wins above replacement (2.3). DeGrom left his Wednesday night start after just two innings due to what the club described as a hamstring spasm. But if he can continue to excel through September (deGrom believes he can make his final two scheduled starts), deGrom has a chance to post the best ERA, adjusted ERA,2 strikeout rate and swinging strike rate of his career and become the third pitcher in MLB history to win three consecutive Cy Young Awards, joining Greg Maddux (1992-95) and Randy Johnson (1999-2002), who each won four straight.3

What is also interesting about deGrom is that he’s doing all this at 32 years old, an age when most pitchers are in decline. Already elite, deGrom just keeps getting better. In particular, he keeps improving a skill that often diminishes with time: fastball velocity.

Pitching speed — which directly correlates to opposing batters’ offensive performance — typically begins to slow in a pitcher’s late 20s, and the decline accelerates in his 30s. But through games played on Sept. 14, deGrom has the speediest average fastball ever for a given season, among starting pitchers who’ve tossed at least 30 innings in a season since 2008. He also owns three of the top five seasons by average fastball velocity among players 30 and older. In fact, deGrom has increased his fastball speed in four straight seasons and in each of his age-30-something years.4 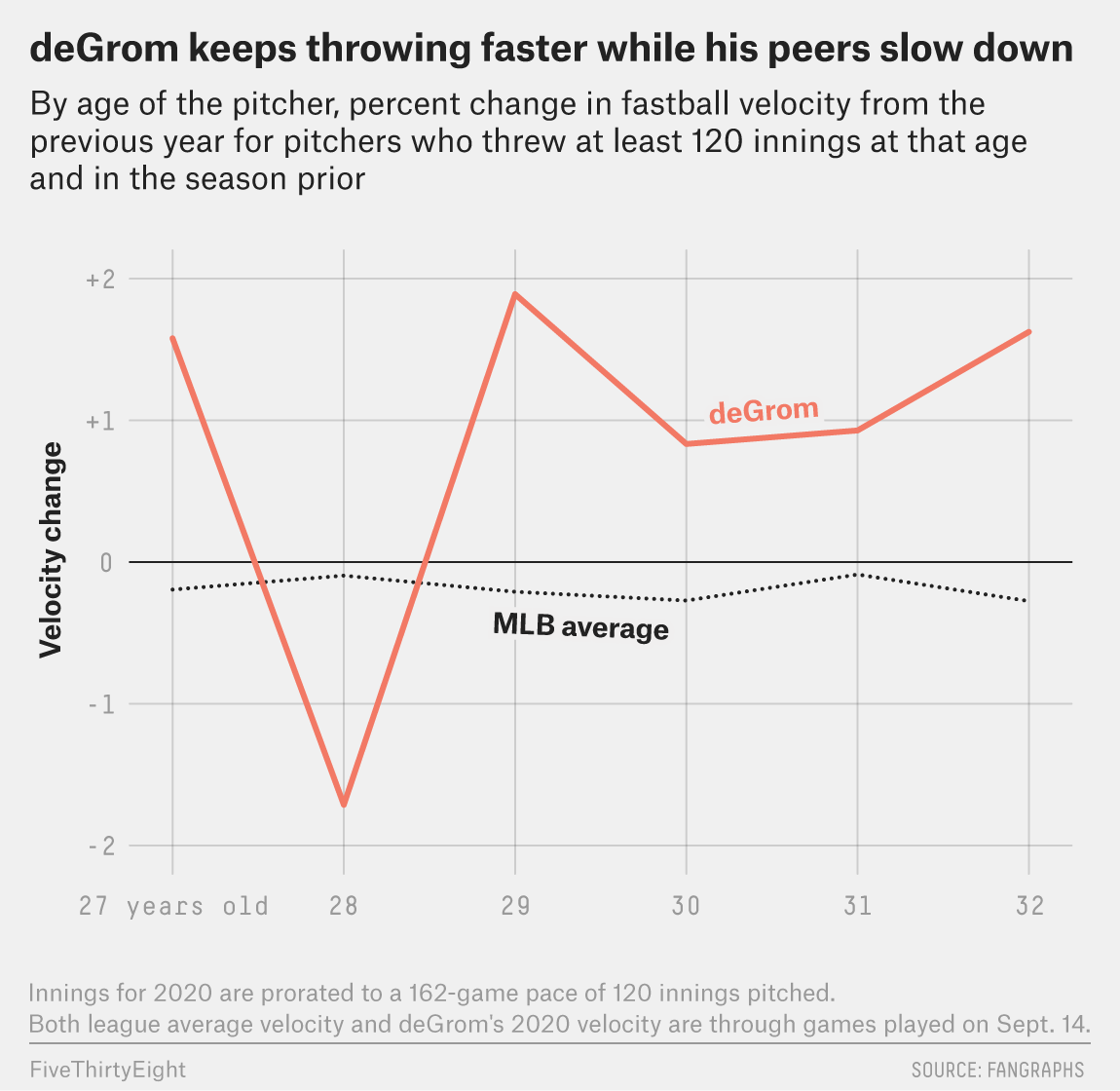 The faster a pitch, the less time a batter has to decide whether to swing and to adjust his swing. Greater fastball velocity often makes batters more susceptible to swinging and missing at breaking balls and changeups too, which, in deGrom’s case, travel faster than some pitchers’ fastballs. Since 2018, deGrom has posted the top three seasons5 by average slider velocity and the top two seasons by average changeup speeds.

All that speed has meant a lot of batters swinging at air. DeGrom’s 2020 swinging-strike rate — how often he induces batters to whiff — would be the best on record (and by more than 3 full percentage points). 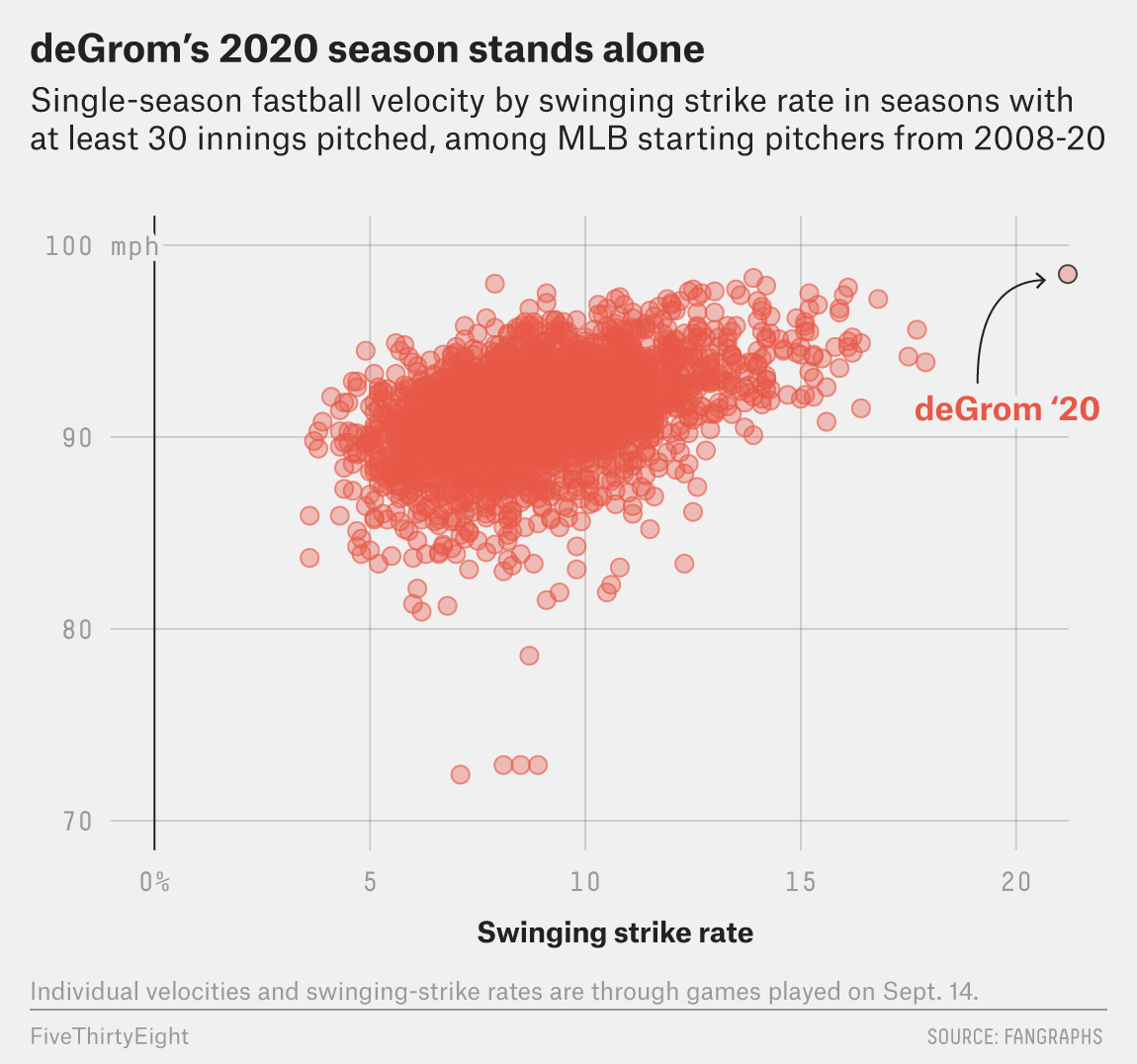 So how is deGrom improving so late in his career? What’s behind these mysterious skill gains that seem impervious to aging? Well … it could be a number of factors.

One NL scout6 said deGrom had unusual upside late in his career because he started so late on the mound, converting from shortstop to pitcher in his final season at Stetson University.

“He didn’t pitch until late in his college career, so there’s some relative freshness to his arm,” the scout told FiveThirtyEight.

An NL pitching development official7 agreed that deGrom may very well be younger in pitching years than his age suggests. He added that deGrom combines an ideally long, lean pitching build with exceptional mechanics.

“He has a lot of similar physical traits to Nolan Ryan, minus the cowboy strength,” the player development official told us. “Long limbs and exceptional mechanical efficiency. Pitchers who lack mechanical efficiency are more reliant on the creation of power to throw hard. When the guys in that bucket stop working hard they lose [velocity] fast, start getting injured, etc.”

This is also an era when new training practices and technological advances have helped some pitchers improve their velocity. DeGrom recently told reporters that he used the offseason and pandemic pause to refine his delivery.

“This break and even in spring, just working on my delivery, I actually feel like it’s coming out with less effort than in years past,” deGrom said. “I think just with that time off, I continued to work on my delivery, and feel like everything’s kind of in line where I want it to be.”

It’s also plausible that deGrom is airing it out in a shortened season, knowing he won’t have to work as many innings. During his outing on Friday against the Toronto Blue Jays, former major league pitcher and SNY television analyst Ron Darling said of deGrom: “He’s never thrown harder, easier. … He’s become so efficient in his mechanics.”

With that added speed, deGrom now owns a fastball that averages 99 mph and has retained exceptional command.

Perhaps deGrom can continue to defy aging curves and pitch at an elite level well into his 30s. FanGraphs analyst Jeff Zimmerman found pitchers who maintain their velocity tend to maintain their performance. And deGrom isn’t just maintaining velocity, he’s increasing it. While Maddux won his fourth consecutive — and final — Cy Young Award in his age-29 season in 1995, Johnson won four straight Cy Young Awards from his age 35 to age 38 seasons. deGrom’s recent performance makes us ask: What if he’s on the Johnson career track? What if, at a time when he should be slowing, deGrom just keeps getting better?