The last time the Jacksonville Jaguars came into Heinz Field, the 7.5-point underdogs embarrassed quarterback Ben Roethlisberger and his Pittsburgh Steelers so badly, Roethlisberger wondered aloud if he didn’t “have it anymore.”

Roethlisberger threw 55 passes in that Week 5 matchup, netting just 5.67 yards per attempt with no touchdowns and a whopping five interceptions. The Steelers managed just three field goals on 12 offensive possessions. The Jaguars didn’t throw the ball well either, but they didn’t need to: Tailback Leonard Fournette rumbled for 181 yards and two touchdowns, while two Jaguars defenders returned interceptions for touchdowns.

On Sunday, the Jaguars will return to the scene of their triumph. Yet they opened as 6.5-point underdogs, with Vegas bookmakers not believing they can do what they did to the Steelers a second time.

So just what did they do to the Steelers?

On the Jaguars’ first defensive play of the game, at least, they didn’t do much. With second-year cornerback Jalen Ramsey lined up tight on All-Pro wideout Antonio Brown, Roethlisberger tested Ramsey by going long — and completing a 49-yard bomb.

Early in the game, Jacksonville showed a lot of tight man and off-man looks, with a single high safety. They also flashed different blitzes, but according to the ESPN Stats & Information Group, they only blitzed once. After the snap, the Jaguars frequently dropped back into middle-of-the-field zones while the corners clamped down on the outside receivers.

By rushing four and dropping seven, the Jaguars allowed a lot of short completions, but they limited post-catch damage. The strategy also limited downfield options, giving the Jaguars’ second-ranked pass rush plenty of time to create pressure and force Roethlisberger to make mistakes.

Just before the end of the first half, the Steelers were facing a 3rd-and-6 at their own 19-yard line. Down 7-3 with 1:20 still on the clock, they still had plenty of time to score before heading into the locker room. Here’s how Jacksonville lined up: 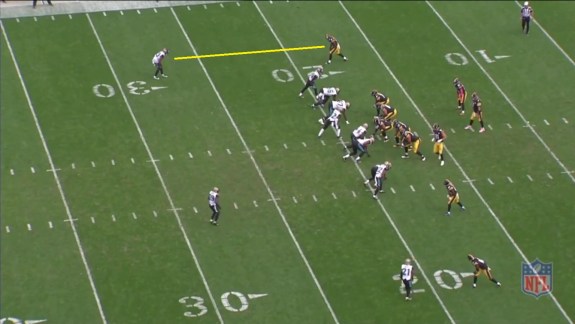 At the top of the screen, Ramsey is giving Steelers wideout JuJu Smith-Schuster almost 10 yards of cushion. This seems like a mistake, given that Pittsburgh only needs 6 yards to convert. Pittsburgh is lined up in the shotgun with 1-1 personnel,1 and Jacksonville has its nickel package in.

Both linebackers are up at the line of scrimmage, along with safety Barry Church, indicating a blitz is coming. But at the snap, only the four down linemen actually rush; the Jaguars drop back seven players into coverage. Roethlisberger, presumably expecting a blitz, locks onto Smith-Schuster and throws early, anticipating Smith-Schuster getting open on his comeback route.

Instead, Ramsey uses his closing speed and makes a great play on the ball:

Trying to get the offense into rhythm, the Steelers unwittingly played into the Jaguars’ hands. Haley called a host of wide-receiver screens and dump-off passes to tailback Le’Veon Bell, but the lateral speed of the Jaguars defenders allowed them to bottle up the Steelers’ short passing game: The Steelers averaged 5.6 yards after catch on the season,2 but they averaged just 3.5 against Jacksonville.

This pattern repeated itself throughout the game. Jacksonville’s corners frequently played Brown tightly, with safety help over the top, while keeping Smith-Schuster in front of them with plenty of cushion. Whether or not the Jaguars showed blitz, Roethlisberger kept throwing to his first read, frequently forcing throws to Brown.

Roethlisberger targeted Brown 19 times on the day, completing just 10 passes. Take out that opening bomb, and Brown gained just 108 yards on the 18 other passes thrown his way. That’s an average of just 6.0 yards per target, down from his season-long average of 9.4. And three of Roethlisberger’s five interceptions came while targeting Brown, including both pick-sixes.

What could Haley and the Steelers have done instead? They could have taken a page from the other team on the field.

While Fournette was racking up 181 yards and two touchdowns on the ground, Bell was given just six second-half carries, despite reeling off his game-high 15-yard carry on the first drive of the second half. Meanwhile, Roethlisberger dropped back to throw 39 times in the second half.

Former Steelers tailback DeAngelo Williams saw the solution, too; he told Steve Gorman of Fox Sports Radio that if “Haley doesn’t run the damn ball like he should have the first time, they should fire his ass.”

Bell only averaged 3.1 yards per carry in Week 5,3 so maybe it won’t be quite as simple as handing him the ball more often. But with Roethlisberger pressing downfield leading to two defensive scores and three flipped fields, restoring run-pass balance to the offense can’t possibly hurt. The Steelers might also benefit from the ball bouncing their way more often; one of Roethlisberger’s picks came on a deflection, and another when Schuster fell down.

Meanwhile, Brown is coming off a calf injury that may or may not hamper him against Ramsey and Jacksonville. If Brown is unavailable or ineffective, and the running game isn’t working, Roethlisberger will have to do a much better job of reading the defense and finding the open receiver — or there will be more picks where the first five came from.