Joe Biden currently has a robust lead in polls. If the election were held today, he might even win in a landslide, carrying not only traditional swing states such as Florida and Pennsylvania but potentially adding new states such as Georgia and Texas to the Democratic coalition.

But the election is not being held today. While the polls have been stable so far this year, it’s still only August. The debates and the conventions have yet to occur. Biden only named his running mate yesterday. And the campaign is being conducted amidst a pandemic the likes of which the United States has not seen in more than 100 years, which is also causing an unprecedented and volatile economy.

Nor has it been that uncommon, historically, for polls to shift fairly radically from mid-August until Election Day. Furthermore, there are some reasons to think the election will tighten, and President Trump is likely to have an advantage in a close election because of the Electoral College.

That, in a nutshell, is why the FiveThirtyEight presidential election forecast, which we launched today, still has Trump with a 29 percent chance of winning the Electoral College, despite his current deficit in the polls. This is considerably higher than some other forecasts, which put Trump’s chances at around 10 percent. Biden’s chances are 71 percent in the FiveThirtyEight forecast, conversely.1 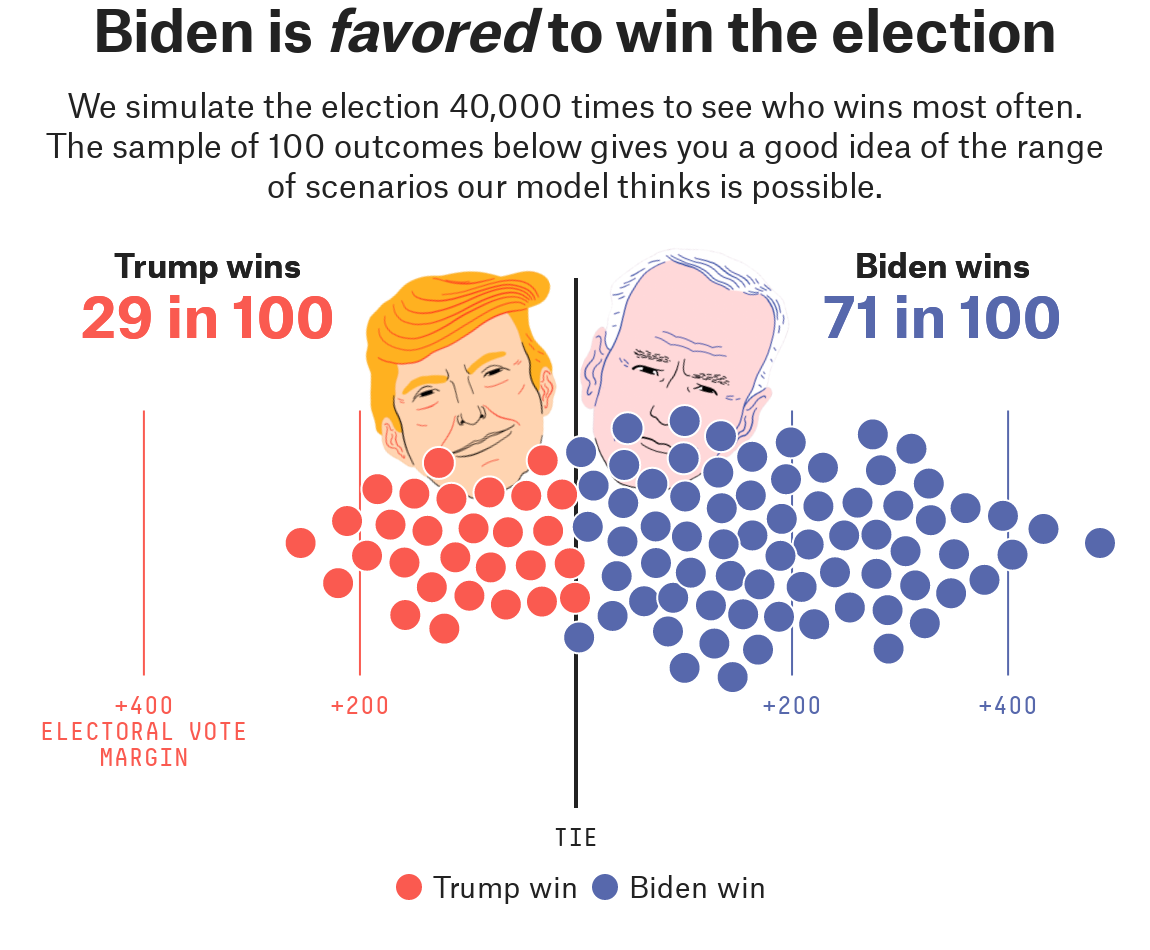 If these numbers give you a sense of deja vu, it may be because they’re very similar to our final forecast in 2016 … when Trump also had a 29 percent chance of winning! (And Hillary Clinton had a 71 percent chance.) So if you’re not taking a 29 percent chance as a serious possibility, I’m not sure there’s much we can say at this point, although there’s a Zoom poker game that I’d be happy to invite you to.

One last parallel to 2016 — when some models gave Clinton as high as a 99 percent chance of winning — is that FiveThirtyEight’s forecast tends to be more conservative than others. (For a more complete description of our model, including how it is handling some complications related to COVID-19, please see our methodology guide.)

With that said, one shouldn’t get too carried away with the comparisons to four years ago. In 2016, the reason Trump had a pretty decent chance in our final forecast was mostly just because the polls were fairly close (despite the media narrative to the contrary), close enough that even a modest-sized polling error in the right group of states could be enough to give Trump a victory in the Electoral College.

The uncertainty in our current 2020 forecast, conversely, stems mostly from the fact that there’s still a long way to go until the election. Take what happens if we lie to our model and tell it that the election is going to be held today. It spits out that Biden has a 93 percent chance of winning. In other words, a Trump victory would require a much bigger polling error than what we saw in 2016.

Let’s briefly expand on the points I made above.

In this article — partly as a corrective against what I see as overconfident assessments elsewhere — I’m mostly focused on the reasons why Trump’s chances are higher than they might appear. But we should be clear: Trump’s current position in the polls is poor.

Biden is currently ahead in our polling averages in Florida, Wisconsin, Michigan, Pennsylvania, Arizona, Ohio and in the second congressional district in Nebraska — all places that Clinton lost in 2016. If he won those states (and held the other states Clinton won), that would be enough to give him 352 electoral votes. He’s also within roughly 1 percentage point of Trump in Texas, Georgia, Iowa and Maine’s second congressional district. If he won those, too, he’d be up to a whopping 412 electoral votes.

But there are downside scenarios for Biden.

Every day, my colleague Nathaniel Rakich tweets out a list of what our national polling average would have looked like at this stage in past campaigns. And it can be a pretty wild ride. Here is Tuesday’s version, for instance.

The @FiveThirtyEight nat'l polling average with 84 days until E-Day:

Three of the candidates leading in national polls at this point — Michael Dukakis in 1988, George W. Bush in 2000, and John Kerry in 2004 — did not actually win the popular vote. Bush blew a 10-point lead, in fact, which is larger than Biden’s current advantage. (Luckily for Bush, he won the Electoral College.) In other cases, the polls at this point “called” the winner correctly, but the margins were way off. Jimmy Carter eventually beat Gerald Ford by just 2.1 percentage points — not the 26.6-point lead he had at this point in the campaign. Bill Clinton won by 5.6 points — not 20.1 points. And Barack Obama won a considerably more commanding victory in 2008 than polls at this point projected.

Now, there are some mitigating factors here. Some of these polls were taken at the height of a candidate’s convention bounce, although there are ways to try to correct for those. And in general, polls have become less volatile over time, probably because increased polarization means there are fewer swing voters than there once were. The polls have been particularly stable so far this year, in fact.

The COVID-19 pandemic has led to more than 150,000 fatalities and has upended pretty much every American’s life, and Trump’s approval ratings for his handling of it have been awful.

But to the extent this is an election about COVID-19, there’s the possibility that the situation could improve between now and November. Cases have recently begun to come down after an early-summer spike, and recent economic data has shown improvement there, too. There’s also the possibility that a vaccine could be approved — or rushed out — by November, though it’s highly unlikely it could be widely distributed by then.

How to account for this? No, we aren’t building a COVID-19 projection model. (It’s really hard.) But we have built an “uncertainty index” that essentially governs the margin of error in our forecast. It contains eight components, two of which are very high because of COVID-19. Specifically, these are the high volatility in recent economic data, and the volume of major news events, as measured by the number of full-width New York Times headlines. There’s more news this year — not just about COVID-19, but the protests around police brutality, Trump’s impeachment earlier this year, etc. — than in any recent election campaign.

We also expect turnout to be harder to predict this year based on primary elections held during the pandemic that had highly variable turnout — which, in turn, could lead to more polling error. So even if the polls don’t change that much between now and November, that could create some additional uncertainty on Election Day. See the methodology guide for more on how we handle COVID-19.

But the other components of the uncertainty index are low, pointing toward a stable campaign. For instance, polarization is high, poll movement so far has been limited, and there aren’t that many undecided voters; the index accounts for all of those things.

In fact, the uncertainty index points toward the overall uncertainty going into November being about average relative to past presidential campaigns. So our model isn’t necessarily saying that things are going to get crazy, although they could. But it’s also saying you shouldn’t necessarily expect highly stable campaigns like 2012 to be the new normal in the time of COVID-19. (And keep in mind that 2016 was a pretty volatile campaign, too, even without COVID-19.) Empirically, the polls can move quite a bit from August to November, more than you might expect intuitively!

There are some sources of uncertainty that the model doesn’t account for, however. We assume that there are reasonable efforts to allow eligible citizens to vote and to count all legal ballots, and that electors are awarded to the popular-vote winner in each state. The model also does not account for the possibility of extraconstitutional shenanigans by Trump or by anyone else, such as trying to prevent mail ballots from being counted.

It’s hard to know what the “fundamentals” say

I’ve long been critical of models that use economic “fundamentals” to try to predict election results, mostly because — although they claim to be highly precise — they haven’t actually been very good at predicting the outcome of an election where they don’t already know the results.

And those models are especially likely to have problems this year because of highly variable economic data. One model based on second quarter GDP projects Trump to win -453 (negative 453!) electoral votes, for example. But if you built a model based on third-quarter GDP, which is expected to be highly positive, it might predict a Trump landslide.

This isn’t to say that we don’t employ a fundamentals forecast of our own. We do, but it’s much less confident than others, and it receives relatively little weight in the overall forecast. It also isn’t currently that bad for Trump. In fact, it essentially predicts the popular vote to be roughly tied. Why?

In other words, our forecast thinks it’s far from obvious that the economy will doom Trump, especially if he can tell a story of recovery by November. Indeed, Trump’s approval ratings on the economy are still fairly good, so our model seems to be doing a reasonably good job of capturing how voters actually feel about the economy.

Another way to look at it is that our model is just saying that, in a highly polarized environment, the race is more likely than not to tighten in the stretch run. Empirically, large leads like the one Biden has now tend to dissipate to some degree by Election Day. And if the race does tighten…

Trump appears to have an Electoral College advantage again

That reflects the fact that the tipping-point state — the state that would provide the decisive 270th electoral vote — is somewhat to the right of the national popular vote. More specifically, our projection as of Tuesday had Biden winning the popular vote by 6.3 percentage points nationally, but winning the tipping-point state, Wisconsin, by a smaller margin, 4.5 percentage points:

That 1.8-point gap is actually smaller than what Clinton experienced in 2016, when there was about a 3-point gap between her losing margin in Wisconsin (which was also the tipping-point state in 2016) and her winning margin in the national popular vote. This analysis is a simplification, too. There’s a lot of uncertainty in the outlook, so the tipping-point state could easily turn out to be Florida or Pennsylvania or something more unexpected like North Carolina.

Still, as a rough rule-of-thumb, perhaps you can subtract 2 points from Biden’s current lead in national polls to get a sense for what his standing in the tipping point states looks like. Add it all up, and you can start to see why the model is being fairly cautious. Biden’s current roughly 8-point lead in national polls is really more like a 6-point lead in the tipping point states. And 6-point leads in August are historically not very safe. That margin is perhaps more likely than not to tighten and at the very least, there’s a fair amount of uncertainty about what COVID-19 and the rest the world will look like by November.

Biden is in a reasonably strong position: Having a 70-ish percent chance of beating an incumbent in early August before any conventions or debates is far better than the position that most challengers find themselves in. And his chances will improve in our model if he maintains his current lead. But for the time being, the data does not justify substantially more confidence than that.