The reigning oligarchs of men’s tennis — Roger Federer, Rafael Nadal, Novak Djokovic and Andy Murray — have devolved a smidgen of power to the sport’s second line.

For six years, the Big Four have ruled the sport, hoarding its biggest titles and topping the rankings. This year, five younger men have broken through, most dramatically on Saturday at the U.S. Open. First Kei Nishikori stunned world No. 1 Djokovic in four sets. Then Marin Cilic straight-setted five-time Open champ Federer. Nishikori and Cilic will play in Monday’s final, the first Grand Slam final for each man and the first without a member of the Big Four since 2005.

Federer lightly applauded his younger rivals’ modest achievements in his post-match press conference Saturday. After congratulating Cilic for his great play, Federer called it “definitely refreshing to some extent” to have new names in a Grand Slam final, and added, “I hope they can play a good final.”

Federer pointed out that any tennis writers who downgraded the Big Four’s stock when Stan Wawrinka won in Australia in January had to explain the finals of this year’s French Open and Wimbledon, which featured exclusively himself, Nadal and Djokovic. “But this is another chance for you guys, you know,” Federer told the room full of journalists. “So you should write what you want. I don’t think so, but … .”

Federer is both right and wrong. The Big Four really have been slipping. That can be hard to spot because each player has had a complicated arc over the last few seasons. Djokovic gained, lost and regained the No. 1 ranking, with Nadal and Federer each holding it for a spell. Federer has rebounded swiftly from a mediocre 2013. Murray has dropped fast after winning two Grand Slam titles and an Olympic gold medal over a 12-month run that ended last summer.

Group the four together, though, and the decline is more apparent. In 2011, they won an absurd 84 percent of their maximum possible total of ranking points at the 13 annual tournaments that bring together the world’s best male players: the Masters and Grand Slam events. That share has fallen steadily each year since, to 66 percent so far this year. Some regression to the mean was inevitable, but the Big Four’s grip on the sport has fallen below the mean, to its lowest level since 2006, according to data compiled from the stats site Tennis Abstract.1 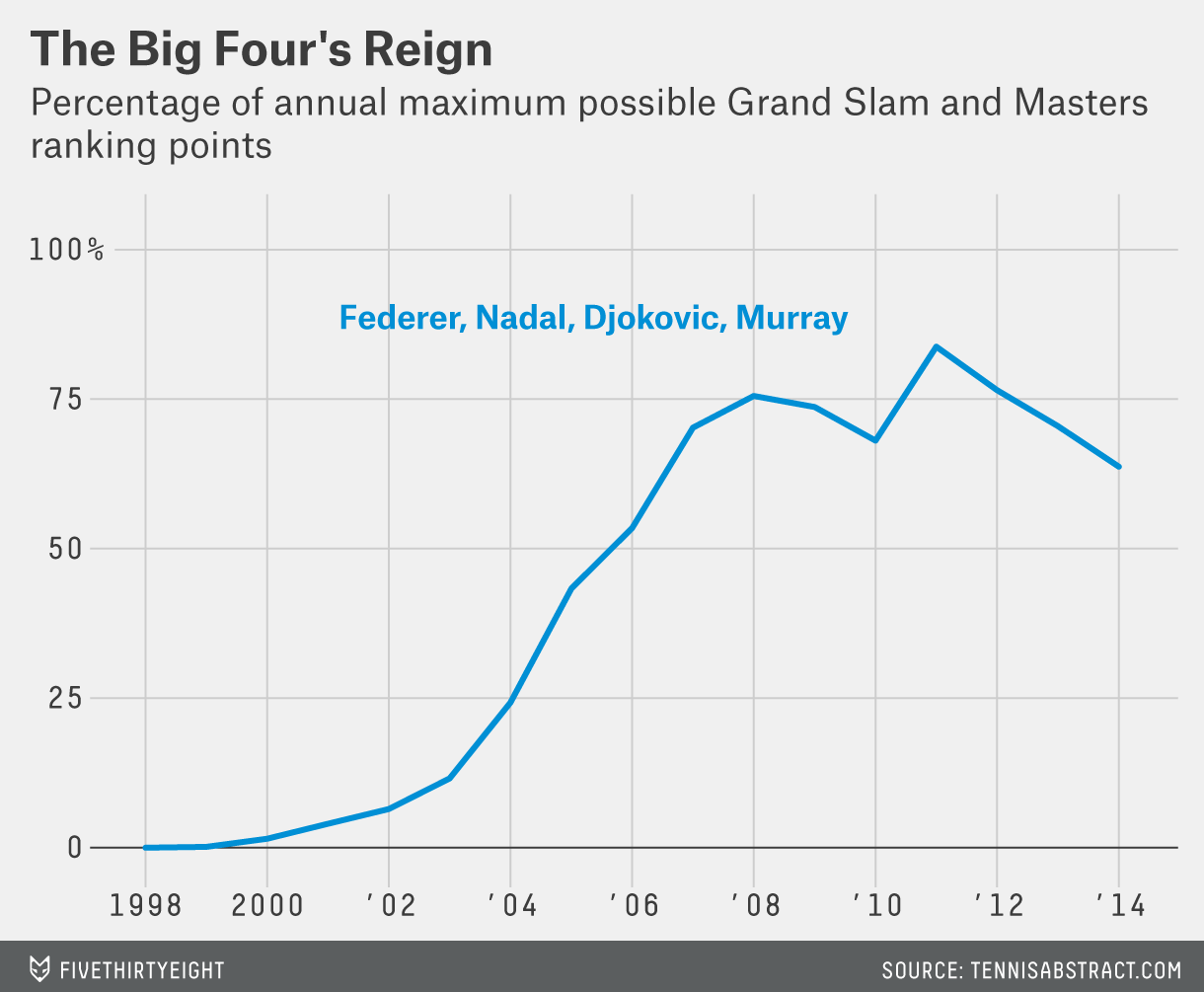 That still leaves the Big Four in a much stronger state than the prior ruling class ever reached.2

The five younger upstarts — Cilic and Nishikori, plus Grigor Dimitrov, Ernests Gulbis and Milos Raonic, who are between age 23 and 26 and reached their first Slam semis this year — have mostly been defined by their arrested tennis development. They’ve shed the previously apt Lost Boys title with career years this season. But they’re more of a Medium Five or Next Five than a Fab Five, though at least, unlike that Michigan quintet, one of these five will win a major title in a Monday championship.

There wasn’t an obvious name for the group until Cilic perfectly described it after his near-perfect match Saturday. In his press conference, Cilic referred three times to the sport’s “second line.”

“The guys there are from second line, are moving closer and they are more often at the later stage of the tournament,” Cilic said. “They are going to get only better; they’re not going to get worse.”

Cilic was including Australian Open champ Wawrinka in his list, but Wawrinka, 29, is older than three of the Big Four. For our purposes, we’re not going to include him so that the “second line” is a separate generation from the current stars, who are between ages 27 and 33.

There is one major name missing from the second line’s roster: Juan Martin del Potro, who turns 26 this month. He and the second line are the six youngest men ranked in the Top 20. Even Monday’s champion probably won’t finish this year with a season as good as del Potro’s best. In 2009, the year he turned 21, del Potro won the U.S. Open, came within a set of the French Open final and reached the quarterfinals of six Masters tournaments.

Injuries have kept him from maintaining that level, and from playing any tennis for the last six months. But already del Potro has achieved in his career more than the quintet of his peers will have achieved after Monday’s final: one major title; three Masters finals (the other five have two total); and seven titles at the 500 level, the next tier down from Masters events (the other five have five, and three of those belong to Nishikori). Before Monday, del Potro was the only man who is now under 27 and had played in a Grand Slam final. Federer had won 12 Grand Slam titles before turning 27.

Adjusting for age shows how much the second line lags the first, even in a career year. The most accomplished four of the bunch — del Potro, Cilic, Raonic and Nishikori — have won 24 percent of their maximum possible total of ranking points at the Masters and Grand Slam events this season. The Big Four, at roughly the same average age in 2010, won 68 percent. At age 20, the Big Four won 53 percent to the second line’s 5 percent at the same age. And this year, all of the Big Four could finish ahead of all five of the second line in the rankings. 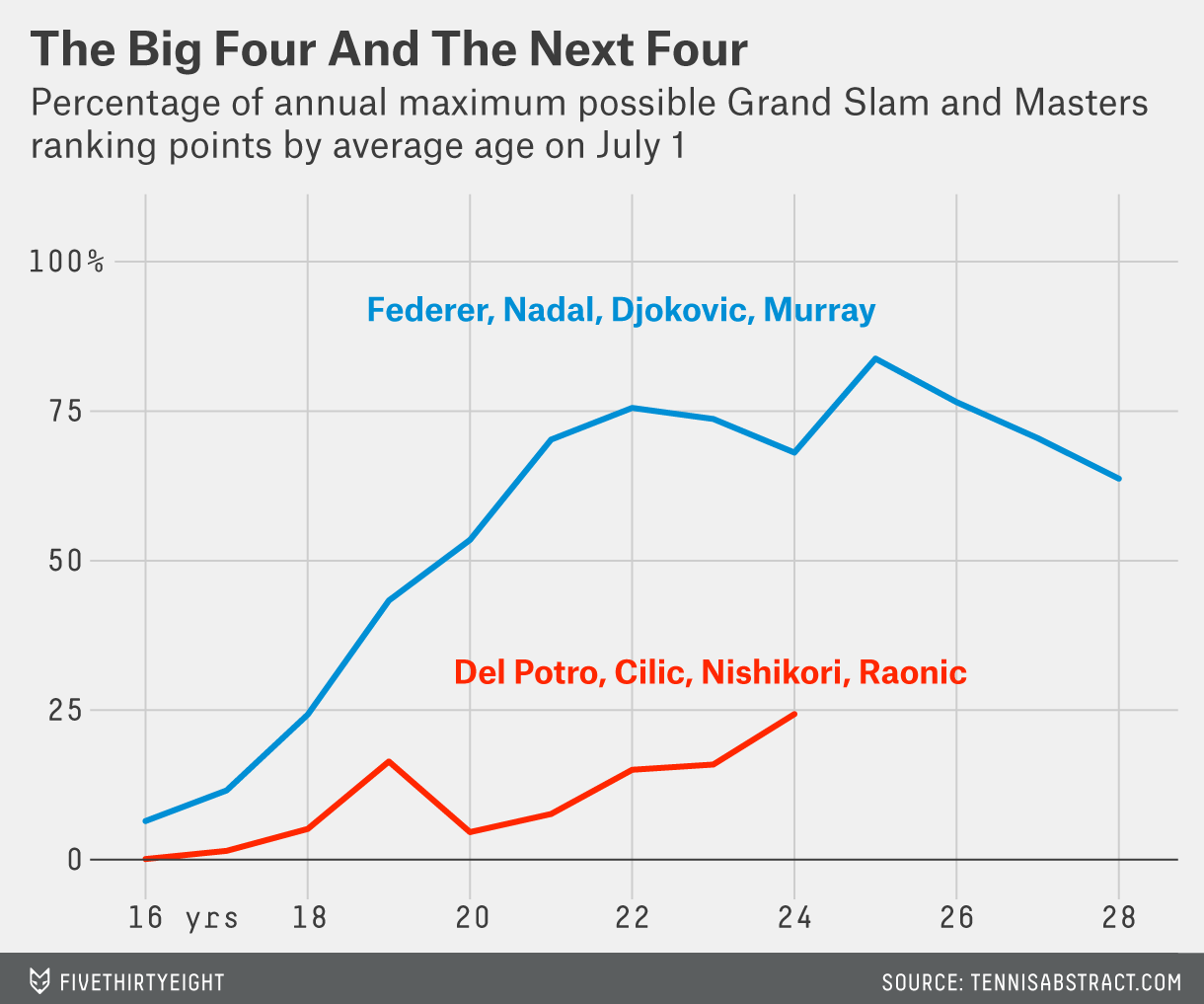 So the second line isn’t the generation we need to take over men’s tennis. But it’s the one we have — at least until the generation of Wimbledon quarterfinalist Nick Kyrgios and other promising teenagers launches its challenge. And the second line is playing its best tennis this season. Heading into the U.S. Open, Dimitrov, Nishikori and Raonic all were on pace for career highs in dominance ratio (DR), the ratio of returning points win percentage to opponent returning points win percentage — a good marker of overall level. And Cilic and Gulbis were serving better than ever, with career highs in ace percentage and first-serve win percentage.

Through the lens of the past week, Nishikori looks like the most impressive member of the second line. He beat three top-five seeds in his last three matches at the Open. But his DR was below 1 in his last two wins, meaning he won them with little margin.

Cilic, by contrast, straight-setted two top-six seeds in his last two matches, and was forced into just one tiebreaker. He has also been more durable than Nishikori has during their careers. The two youngest members of the group, Dimitrov and Raonic, have stayed mostly healthy, too, and have climbed the most steadily and quickly.

One of those three or del Potro probably will finish with the best career of the second line’s generation. Whoever does will be hard pressed even to match the achievements of Murray. He’s by far the weakest member of the Big Four, an oligarchy that remains dominant even in its decline.