Today we continue our Presidential Geography series, a one-by-one examination of the peculiarities that drive the politics in all 50 states and the District of Columbia. Today’s stop: Alaska, the Last Frontier. Note: Because Alaska has a unique, and often inconsistent, method of geographically grouping and reporting its party registration statistics and election results, the usual state charts and the bellwether county section are not included.

For 67 days in 2008, Alaska was a leading player in American politics, pulled — in tow with then-Gov. Sarah Palin — by the McCain campaign into the national dialogue.

Ms. Palin — who had an approval rating of about 80 percent in Alaska when she joined the McCain ticket – brought the state’s culture with her, and reporters and pundits were suddenly talking about moose meat and hockey moms.

Today, Ms. Palin and the Last Frontier are hard to find in political reporting. Ms. Palin is heard from very little beyond her role as a contributor on Fox News. The latest story about Ms. Palin centered on whether she would be invited to speak at the Republican National Convention in Tampa, Fla.

Alaska voters also seem to have moved past the Palin era. An Ivan Moore Research poll in late 2011 found that just 29 percent of registered voters in Alaska had positive feelings about Ms. Palin.

“I have a sense that today she would have a very hard time getting elected here,” said Margaret Stock, an adjunct instructor in the department of political science at the University of Alaska Anchorage.

“I don’t think she could get elected to anything,” said Donald C. Mitchell, who has written extensively about Alaska Natives and Alaska politics. 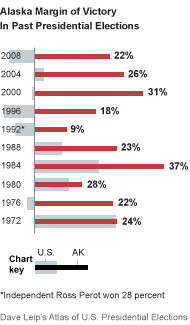 While no longer enamored with Ms. Palin, Alaska is still a conservative state and Mitt Romney should have little trouble winning its three electoral votes. But the state’s political instincts are more nuanced and idiosyncratic than the partisan image of its most famous Republican governor.

Alaska’s current senators do not fit the Palin mold. The state’s senior senator, Lisa Murkowski, a Republican who supports abortion rights, lost the 2010 Republican primary to a Tea Party favorite, Joe Miller. But Ms. Murkowski went on to run in the general election as a write-in candidate, ultimately defeating Mr. Miller, who was endorsed by Ms. Palin.

The state’s junior senator is Mark Begich, a Democrat (yes, a Democrat).1

Among the state’s most prominent elected officials, Sean Parnell, Alaska’s governor, may be the closest to Ms. Palin politically. “We have a governor who is following many of the same policies [as Ms. Palin],” said Mead Treadwell, Alaska’s lieutenant governor, “but he is not a lighting rod.”

Over all, Alaska’s electorate, although certainly right of center, is difficult to pigeonhole. “I wouldn’t say we’re a hard-core Republican state,” Ms. Stock said, “there are issues where Lisa Murkowski has completely broken with the Republican Party, and Alaskans are happy about that.”

More than half of the state’s residents live in and around Anchorage and the Kenai Peninsula. There are pockets of liberal voters, but it’s a mostly Republican area, and Anchorage is a mostly conservative city, with a large number of evangelical Christians. Forty miles to the north is the Matanuska-Susitna Valley. It is one of the most socially conservative areas of the state and is heavily evangelical.

A little more than one-tenth of Alaskans live in Fairbanks and its suburbs. Fairbanks has a Democratic constituency at its city’s core, but beyond that, it’s overwhelmingly conservative, and perhaps the most libertarian region in one of the most libertarian states. The Tea Party and its small government message have broad support in Fairbanks, the Mat-Su Valley and Alaska generally. Since statehood in 1959, the federal government has had more control over Alaska than most states, particularly over how to use its energy resources, which has prompted some backlash.

Slightly more than 10 percent of residents live in southeast Alaska, in the area around Juneau. Victor Fischer, an author and former professor at the University of Alaska Anchorage, said the area is generally more Democratic and Republicans in the region are closer to the ideological center. 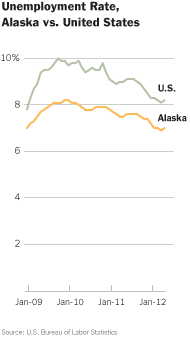 The rest of the state is barely inhabited, with a smattering of small towns. And there are large swathes of land that are completely uninhabited. About half the state’s Alaska Native population, 2 which is 15 percent of the state, lives outside the big population centers. Alaska Natives lean Democratic, Mr. Fischer said.

Alaska’s quirks and contradictions make the state difficult to characterize politically. Although Alaska has a strong libertarian streak, it is very dependent on federal largess. “Alaskans are on the dole,” Ms. Stock said.

The United States military has a major presence in the state, with bases near Anchorage and Fairbanks. Roughly 14 percent of Alaska residents are veterans. But Alaska is also the second youngest state in the country.

The state’s economy also has internal conflicts. The four biggest employers in Alaska are the oil, fishing and tourism industries and government. Interest groups in each industry often find th
emselves working at cross purposes, particularly oil and fishing.

And with just over 720,000 residents, Alaska has less than a quarter of 1 percent of the nation’s population, yet it covers more than a sixth of all its land. Alaskans are mostly clustered in the cities of Anchorage, Fairbanks and Juneau, and so in a giant state, candidates for political office still practice retail politics, Mr. Mitchell said. The personality of each candidate can have a significant influence on how people vote, since many of them actually meet the candidates.

The 2012 presidential contest in Alaska is unlikely to carry much suspense. Mr. Romney has a 99 percent chance of carrying the state, according to the current FiveThirtyEight forecast. But Alaska’s consistent leanings in presidential contests, as well as Ms. Palin’s partisan politics, belie a more shades-of-gray conservatism on the ground.

Look no further than the period just before Ms. Palin was plucked out of northern obscurity: In early 2008, polls showed John McCain’s margin over President Obama in Alaska in only the single digits.

And Ms. Palin herself was less partisan. She worked with Democrats in the state legislature to raise taxes on oil companies. She created a sub-cabinet team to address climate change. And although she personally supported it, Ms. Palin vetoed a bill that would have barred same-sex couples from receiving state benefits, saying it was unconstitutional.

“She was very progressive in many, many ways,” Mr. Fischer said.

1: Mr. Begich won election in 2008, defeating former Senator Ted Stevens, who was convicted of concealing extravagant gifts before the election. The conviction was later thrown out because of prosecutorial misconduct.

2: Alaska is relatively diverse. Besides the Alaska Native community, the state is 6 percent Hispanic, 6 percent Asian and 4 percent black, according to Census Bureau estimates for 2011.