Color me a bit confused. Did the same person who once wrote a book entitled The Neglected Voter: White Men and the Democratic Dilemma also just write an editorial entitled Note to Liberal Elite: It’s Not About Race?

Anyway, you come here for data-based argumentation, so let me give you some of that first — and then we can come back to Real Clear Politics’ David Paul Kuhn, the author of both those pieces. This is Obama’s approval rating by racial group since the start of his term, as broken down by Gallup: 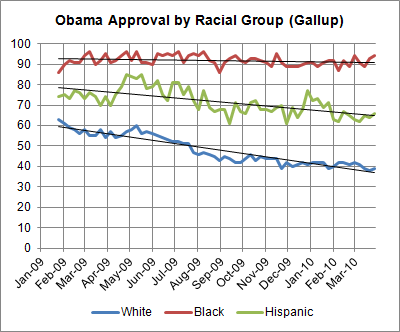 Obama’s approval rating among white voters has indeed fallen off by around 20 points since his tenure began. But, it’s also fallen off by nearly as much among Hispanics. Opinions among black voters, meanwhile, have been more or less unchanged.

All of which goes to prove … whatever you want it to prove, I suppose. But it’s not clear that the decline in Obama’s approval ratings have been especially steep among white voters — once you’re controlling for other variables like income and ideology. White voters’ votes tend to be the swingiest to begin with — followed by Hispanics, and distantly trailed by blacks. If you compared, say, white moderates/independents to Hispanic moderates/independents or Asian moderates/independents, you might find about the same erosion of support among all three groups (or you might not — perhaps Gallup will see fit to publish this data).

Another reason the decline looks so steep is because Obama got a fairly large bounce in his approval ratings between the election itself and his inauguration — something which used to be routine during the Eisenhower/Kennedy era, but which hasn’t been recently. Most of that bounce — which ironically very well may have had to do with the historical significance of Obama’s election — came from white voters, as we can see if we add the election day exit polling to our approval ratings chart: 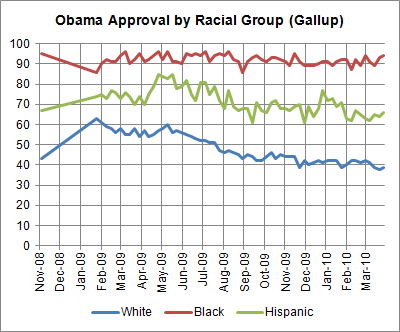 Obama’s approval decline among white voters does not look so steep if you compare it to his election day results — nor for that matter to the election results of past Democratic candidates. Since 1972, the Democrat’s share of the white vote in Presidential elections has been: 31 percent, 47 percent, 36, 35, 40, 39, 42, 41, and 43 percent (Obama). Something around 39 or 40 percent of the white electorate — where Obama’s approval ratings seem to be now — is pretty much right in that ballpark.

So, I’m not totally unsympathetic to the argument made by Kuhn. To say that opposition to health care reform is all about race would be a hasty generalization. Surely the fact that people are stressed out about the economy must warrant a mention in the discussion. Likewise, that the concerns that the electorate developed during the Reagan Era about the proper role of government have never entirely worn off.

At the same time, whenever this subject comes up — as it has recently because of Frank Rich’s editorial in the New York Times this Sunday — it always seems as though the comeback is to respond to hasty generalizations with even hastier ones. Kuhn takes a relatively nuanced argument that Rich makes and characterizes it thusly:

If Rich is correct, and opposition to the healthcare overhaul concerns race, then the roughly 125 million white adults who do not approve of the legislation are racists.

Rich, of course, never said anything like that. He column was focused more on what he calls “right-wing extremism” than on the feelings of the electorate at large. He comes closer to saying that the anger he sees embodied by the tea-party movement has much to do with race (a point on which I’m ambivalent — and which Kuhn, ironically, seems almost willing to concede). But, Kuhn’s formulation of Rich’s argument is, of course, a straw man.