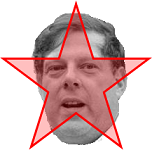 We’re introducing a new scale tonight to “reward” polling and strategy memos which are vapid, disingenuous, jargony, or just plain fucking wrong. The scale is dubbed the Pennometer after former Clinton strategist Mark Penn, who was a master of the genre; it runs from 0 Penns for memos that are honest and persuasive to 5 Penns for those which might as well have been penned by Penn himself.

Our contestant in this pilot episode is this memo, which was circulated to the Washington Post’s Greg Sargent by the Democratic Congressional Campaign Committee (DCCC). It argues that it’s like totally impossible for the Republicans to win the House, okay dudes?

Republicans will need to win 39 seats to take back the House. Democrats will win at least four Republican seats (the best opportunities include: LA-02, HI-01, IL-10, DE-AL, FL-25). As a result, the real number of seats Republicans will have to pick up to win a majority is at least 43. To win 43 seats, the NRCC would need to put 70 to 80 seats in play. The NRCC have simply not put that many Republicans seats in play and do not have the resources or caliber of candidates to do so.

There’s not really any there there. What does it mean for a seat to be “in play”, for instance? Suppose it means a seat which the Republican has some tangible chance of winning. If that’s the case, there are more than 70 or 80 seats “in play”. In fact, there are 101 Democrat-held seats that are rated as something other than safe by at least one of the “Big 4” forecasters (Cook, CQ, Rothenberg, Sabato). And if you include Real Clear Politics’ forecasts in the mix, the total rises to 108.

That’s a fairly liberal definition of “in play”, but at least it’s one with some concrete standard attached. By a slightly more conservative definition — a seat is “in play” if at least three of the five forcasters noted above think it is — the figure is 89 seats, still higher than the range that the DCCC memo suggests.

But I don’t know that we should be erring on the side of conservativism in defining the number of seats that are “in play”. Occasionally, in a wave election, a few seats that nobody was polling and nobody was paying attention to might wind up switching sides: one instance I recall is the IA-2 district in 2006, which was won by then-obscure political science professor Dave Loebsack, who edged out 15-term (!) Republican incumbent Jim Leach. (I was following the race intently because Leach, although a moderate Republican overall, was a leading proponent of the legislation to prohibit online poker, from which I was making a portion of my living at the time.)

The DCCC memo also argues that there’s like no freaking way that the Republicans can win more than about 60 percent of the seats that happen to be “in play”, however that’s defined:

I don’t really know what the basis for this claim is. Would it be impossible for the Republicans to win 43 seats, for instance, if there were 69 of them “in play” rather than 70? If you tossed a fair coin 69 times, there is only about a 3 percent chance that it would come up tails on at least 43 of those occasions. But elections to Congress aren’t like that; the outcomes aren’t independent of one another. If the pollsters aren’t quite capturing the full magnitude of anti-Democratic sentiment, for instance, that’s going to affect a lot of races, and a large fraction of the “toss-ups” could go to the Republicans.

Of course, we should be careful not to conflate the terms “in play” and “toss-up”, which are not at all synonymous. Of the 108 “in play” seats that we described above, there are only 8 that the consensus of five forecasters thinks are more likely than not to go to the Republicans, and 27 which the consensus deems to be a toss-up. Conversely, 73 of the 108 “in play” seats are still thought to be more likely than not to hold for the Democrats.

Obviously, this is a question that begs for more systematic analysis, and we’ll be rolling out our House forecasting model at some point next month. If our Senate model is any guide — it tends to imply a more pessimistic forecast for Democrats than the qualitative forecasters like Cook do — it might not contain good news for Team Blue. But the logic of the House forecasting model will be quite different than the Senate one, so there’s really no telling.

The memo also asserts, quite confidently, that Democrats will win at least 4 seats currently held by Republicans.

Again, this claim is dubious. There are only two Republican-held seats — DE-AL and LA-2 — that the consensus of forecasters think are more likely than not to go to the Democrats, but both are still highly uncertain. There are also two seats, HI-1 and IL-10, that the forecasters regard as toss-ups. Democrats certainly could win all four of the seats — and they could win 5 GOP-held seats, or 6, or 8, if the sentiment turns out to be more anti-incumbent than anti-Democrat. But none of these seats are in the bag, and being completely shut out — as happened to the Republicans in 2006 and the Democrats in 1994 — is unlikely but not completely out of the question.

The second paragraph of the memo contains further arbitrary math of the sort you see above, which I will not address out of concern for flogging a dead horse. The third paragraph talks about the Tea Party potentially costing the Republicans a few opportunities where inexperienced and/or wacky candidates are nominated: I happen to agree with this point based on what we’re seeing in some Senate races like Nevada and Kentucky, although bear in mind that in the macro view, the Tea Party has been a huge asset to the Republicans in the way that it facilitated a “rebranding” of conservative ideas.

It is, of course, an impossible task to argue that the Republicans have no chance of winning the House, something which betting markets — and yours truly — in fact consider to be somewhat more likely than not. Unavoidably, therefore, the memo was indeed vapid, jargony, and just plain fucking wrong in many places. However, because it largely avoided being disingenuous, we’ll give it only 3.5 Penns rather than a full allotment of 5.