The Department of Justice is drafting a legal memo recommending that no civil rights charges be brought against Darren Wilson, the police officer who shot and killed Michael Brown in Ferguson, Missouri this past August, reports The New York Times. After a grand jury decided not to indict Wilson on criminal charges this past November, the DOJ’s decision to drop the case would mean an end to any official investigation into the shooting itself.

As FiveThirtyEight’s Ben Casselman reported at the time, the grand jury decision was an extreme outlier in one regard, and not particularly surprising in another: Grand juries, at least federal ones, almost always vote to indict — except when it’s a police officer facing indictment.

But what about this DOJ decision? Is the decision not to bring civil rights charges against Wilson unusual?

In a word, no. The burden of proof for successfully prosecuting civil rights charges is so high that the vast majority of investigations taken up by the DOJ Civil Rights Division end up being dismissed, almost in inverse proportion to the rest of the investigations undertaken by the federal government.

To bring charges, prosecutors would not only have to prove that Darren Wilson used excessive force, but that he did so intentionally to deprive Michael Brown of his civil rights, or did so because of his race in particular. Without a track record of violations or records of explicit intentions, that’s an almost impossible task.

In 2010, according to the Bureau of Justice Statistics, 85.3 percent of civil rights investigations ended in dismissal, while 84.1 percent of all federal investigations either led to a trial or were brought before a magistrate judge, for either preliminary hearings or, in the case of minor charges, a decision.

And the 15 percent follow-through rate for civil rights cases is higher than it was in previous years, especially under the Bush administration. In 2002 and 2005, investigators declined to pursue 95.6 and 93.5 percent of civil rights cases, respectively, the high-water marks for the 2000s. 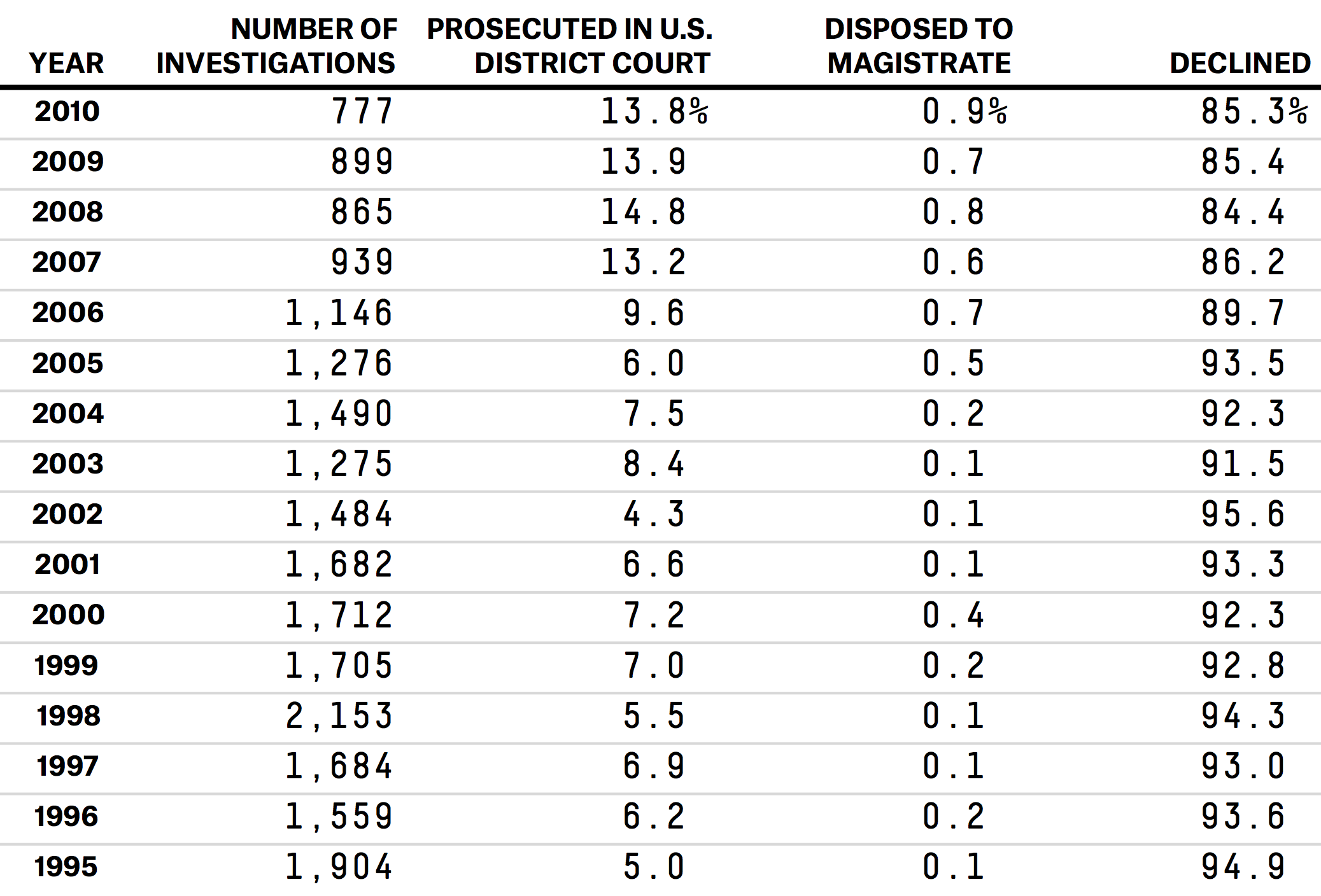 The Ferguson police department as a whole is still under a civil rights investigation for possible discriminatory traffic stop policies and general use of excessive force. It’s unclear what kinds of charges that might lead to, but the history and documents of an entire police department offers a lot more potential evidence of wrongdoing.

Sam Dean is a freelance journalist living in Brooklyn. @samaugustdean