In the first Thursday night TNT game of the 2019-20 NBA season, the Milwaukee Bucks picked up a road victory over the Houston Rockets, outscoring the home team 39-24 in the fourth quarter and 26-16 over the final seven-plus minutes of the game. That the Bucks pulled out a close win down the stretch was not unusual in and of itself: On their way to 60 regular-season wins last year, the Bucks were one of the best clutch-time teams in the NBA, going 22-14 in games that were within 5 points at any time in the last five minutes, according to NBA.com. What is unusual about this particular win was that all of clutch time was played without the services of reigning MVP Giannis Antetokounmpo, who fouled out with 5:18 remaining in the game.

The Bucks’ second game of the season also entered clutch time, with their contest against the Miami Heat going to overtime after Antetokounmpo tied the game at the buzzer by tipping a Khris Middleton airball into the hoop. Two minutes and 29 seconds into overtime, though, Antetokounmpo fouled out again. And he wasn’t the only one. Three other players1 fouled out of that game as well.

Foul outs are generally pretty rare, and games with multiple players fouling out are even more so. But that Bucks-Heat matchup was not even the first game this season in which multiple players were disqualified because of fouls, and it almost certainly won’t be the last.2 Foul outs have absolutely skyrocketed early this season.

Through the 51 games played as of Monday night, there had been 21 foul outs. Given that there are 1,230 games played in an NBA season, this puts us on a full-season pace of 506 foul outs this season. How does that compare to previous seasons?3 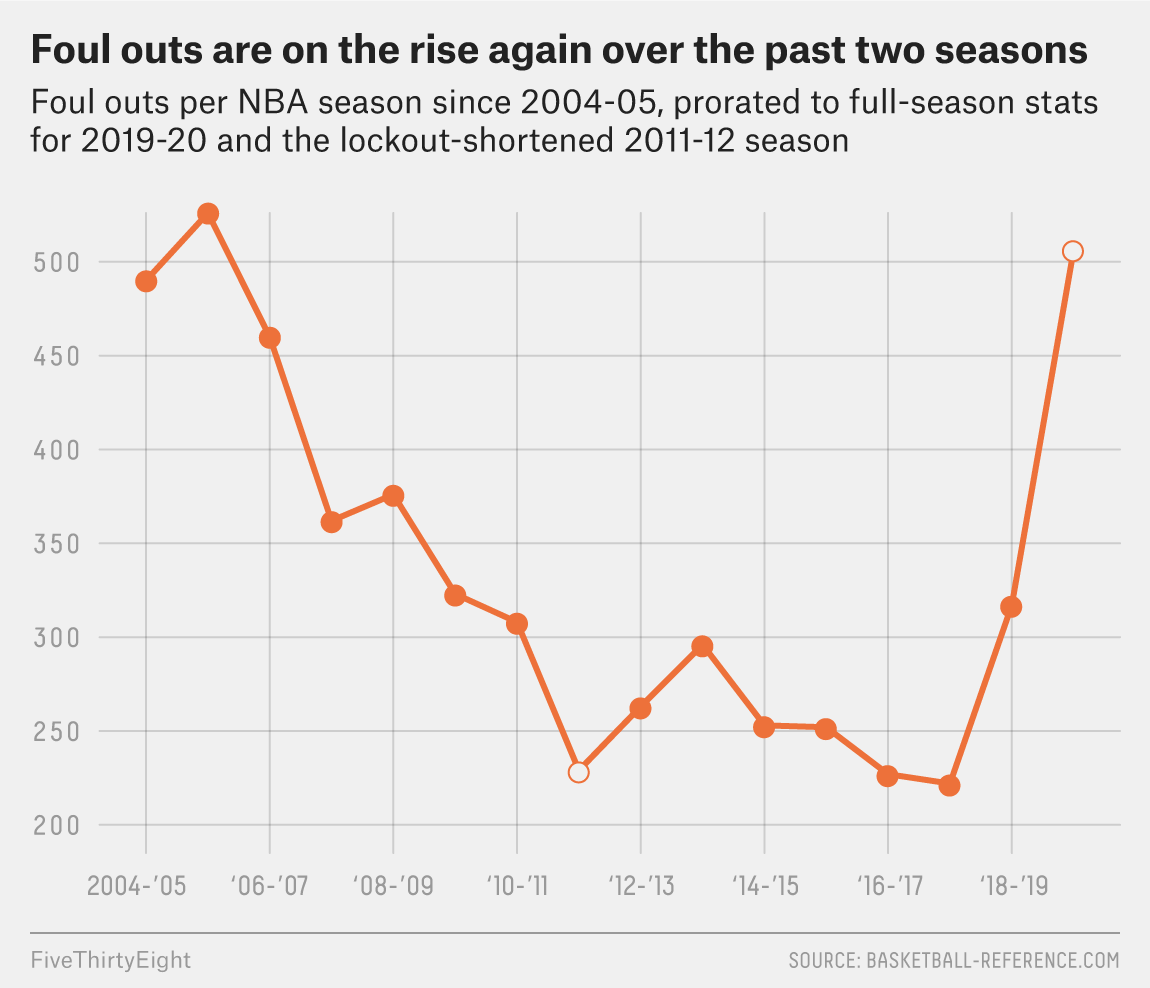 Some of this year’s incredible foul-out pace is obviously due to a small sample size. There aren’t many games in which four players foul out, and in a sample of just 51 games, having just one will affect the full-season pace quite a bit. But even if you remove that game, the league would still be on pace for 418 foul outs this season, an increase of nearly 32 percent from a year ago.4

What’s behind this early-season phenomenon? There appear to be a few contributing factors. The first is an overall spike in foul calls. Last season, the league averaged 41.6 total foul calls per game, according to data from PBP Stats. This year, that number has shot up to 48.1 per game. Much of that spike can be explained by an increase in the rate of offensive foul calls.

The league identified “Illegal Contact Initiated by Offensive Players” as its first officiating point of education for the 2019-20 season. “The officiating staff will maintain heightened focus on these types of plays moving forward this season,” said Monty McCutchen, Vice President of referee development and training, in a video offering guidance about these types of fouls. But there’s emphasizing a point of education, and then there’s what’s happening this season. 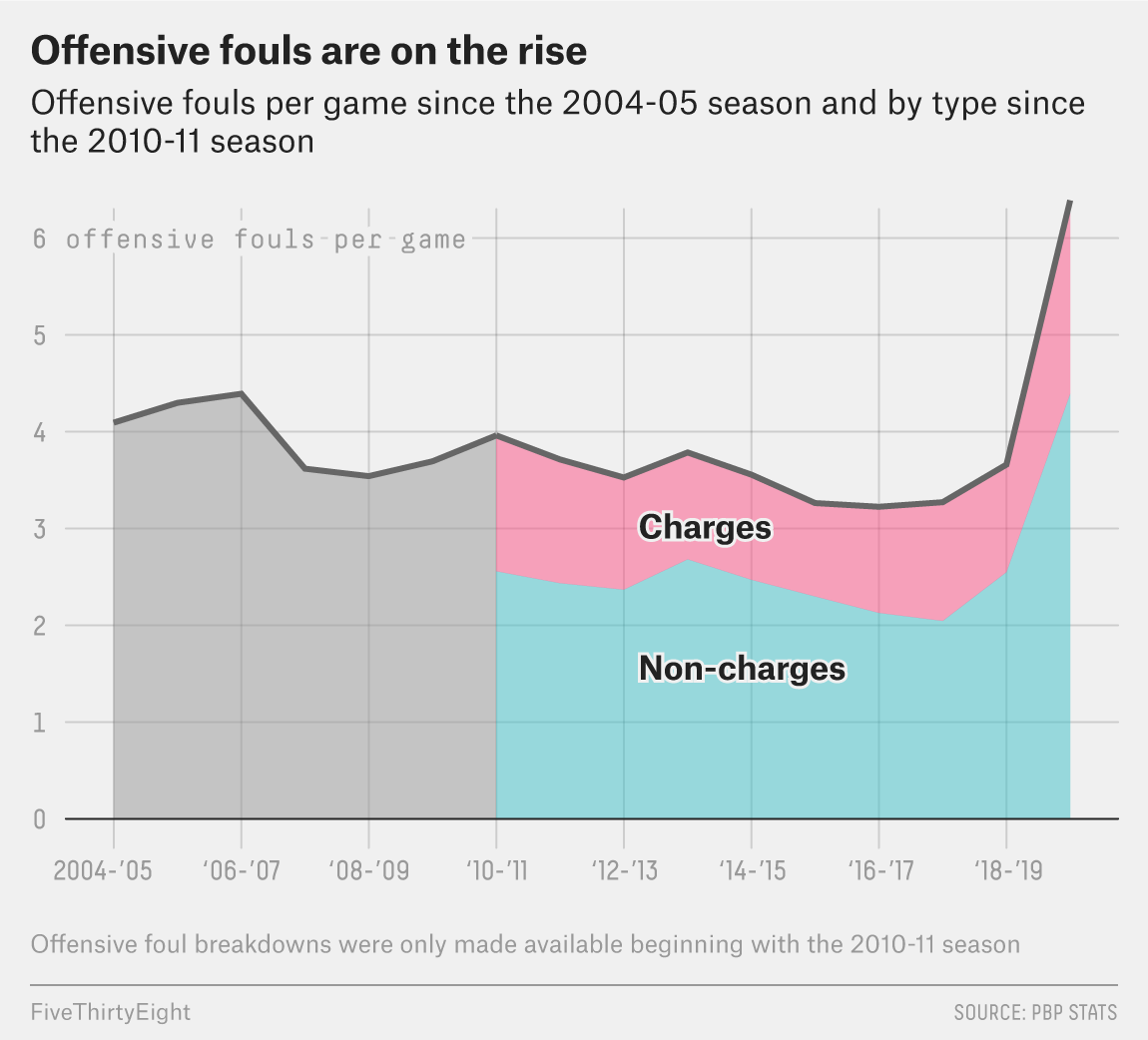 So far in the 2019-20 campaign, referees are whistling 6.39 offensive fouls per game, nearly 75 percent more than the 3.66 they called a year ago. Charges have spiked from 1.11 per game last season to 1.84 this year. Illegal screens and other offensive fouls have jumped as well, shooting up from 2.55 per game to 4.55 per game. Offensive fouls account for 13.4 percent of all foul calls so far this season and have contributed to 12 of the 21 foul outs leaguewide.

Instead, we may be able to blame a specific group of players: the youngest in the league. Players between 18 and 22 years old are being given more responsibility and a greater share of minutes than ever in our time frame. From 2004 to 2018, these players accounted for between 13.1 percent and 17.9 percent of all leaguewide minutes played. During the 2018-19 season, that number spiked to 20 percent.9

A typical player in that youngest age range averaged 4.4 fouls per 48 minutes, nearly 10 percent greater than a player aged 23 and older, and that’s in line with figures from prior seasons. The 18- to 22-year-olds accounted for 75 of the 317 foul outs the league saw last season, the greatest number of foul outs that group of players had had since the 2008-09 campaign. Perhaps not coincidentally, foul outs began dropping off after that season.

It’s worth noting that the youngins have accounted for five of the 21 foul outs so far this season, which puts them on pace for 121 on the year — or nearly as many as the past two seasons combined. With teams increasingly asking younger players to handle larger and larger minute burdens, and with the league once again looking to crack down on certain types of foul calls, it’s entirely possible we could be in for a season full of players exiting the game early.