As the godfather of sabermetrics, Bill James, has noted, baseball is — at its core — a game of controlling the strike zone. Indeed, how much can we tell about a team just from its basic strike-zone indicators?

Specifically, there were two metrics I wanted to look at. The first is James’s strike-zone win-loss percentage, which sets the classic strikeout-to-walk ratio to the same scale as winning percentage while taking into account the league norms in both stats. The second is Fielding Independent Pitching (FIP), a measure of pitching performance that only concerns itself with strikeouts, walks and home runs. (A pitcher’s rate of home runs allowed, while technically not part of baseball’s core balls-and-strikes battle, appears to be as strongly linked to his essential skill set as is his strikeouts and walks.)

At a glance, these numbers seem like they shouldn’t do a very good job of explaining a team’s ability level. After all, they ignore hits on balls in play, which make up a sizable part of the game. Yet, knowing what we know about the role of luck when the ball is put in play, perhaps a metric that ignores those noisy outcomes could actually be preferable.

So let’s check it out: How well do each of these defense-independent rates predict a team’s future (out-of-sample) wins compared with seemingly better metrics like, say, the team’s actual winning percentage or its pythagorean record (a win-less record based on run differential)?

I used Baseball-Reference’s handy Split Finder tool to gather batting and pitching data for every team in the first and second halves of the season over the past three years (each “half” being determined by the All-Star break). For each half-year, I computed the following statistics for every team (each seeks to measure a team’s performance, in order of increasing complexity): winning percentage; Pythagenpat winning percentage; Pythagenpat winning percentage using base runs as the inputs instead of actual runs scored and allowed; strike-zone win-loss percentage; and FIP differential (FIP allowed by opposing pitchers minus team FIP). I then ran a correlation between each metric in each half-season and the team’s winning percentage in the opposite half of the season.

Here were the results:

It’s worth noting that none of the differences between these correlations is significant at the 0.05 level (a fact that could change with further study, if we incorporate a larger sample of seasons). But if you run a regression attempting to forecast opposite-half winning percentage using all of the metrics above, the only two that show up as significant predictors are FIP differential and Pythagenpat W-L%, with FIP differential taking on a relative importance about 29 percent higher than Pythagenpat.

The implication of all this is that we can glean a lot of information about where a team is trending from its ability to control the strike zone, provided that we also include home runs as a measure of how hard the ball is or isn’t being hit, and scale each event relative to its value under linear weights.

Armed with this insight, here are the team leaders in FIP differential, along with their standard and Pythagenpat winning percentages (keeping in mind that, this early in the season, there’s a gulf between observed performance and talent, in addition to the standard caveats about strength of schedule in the early going): 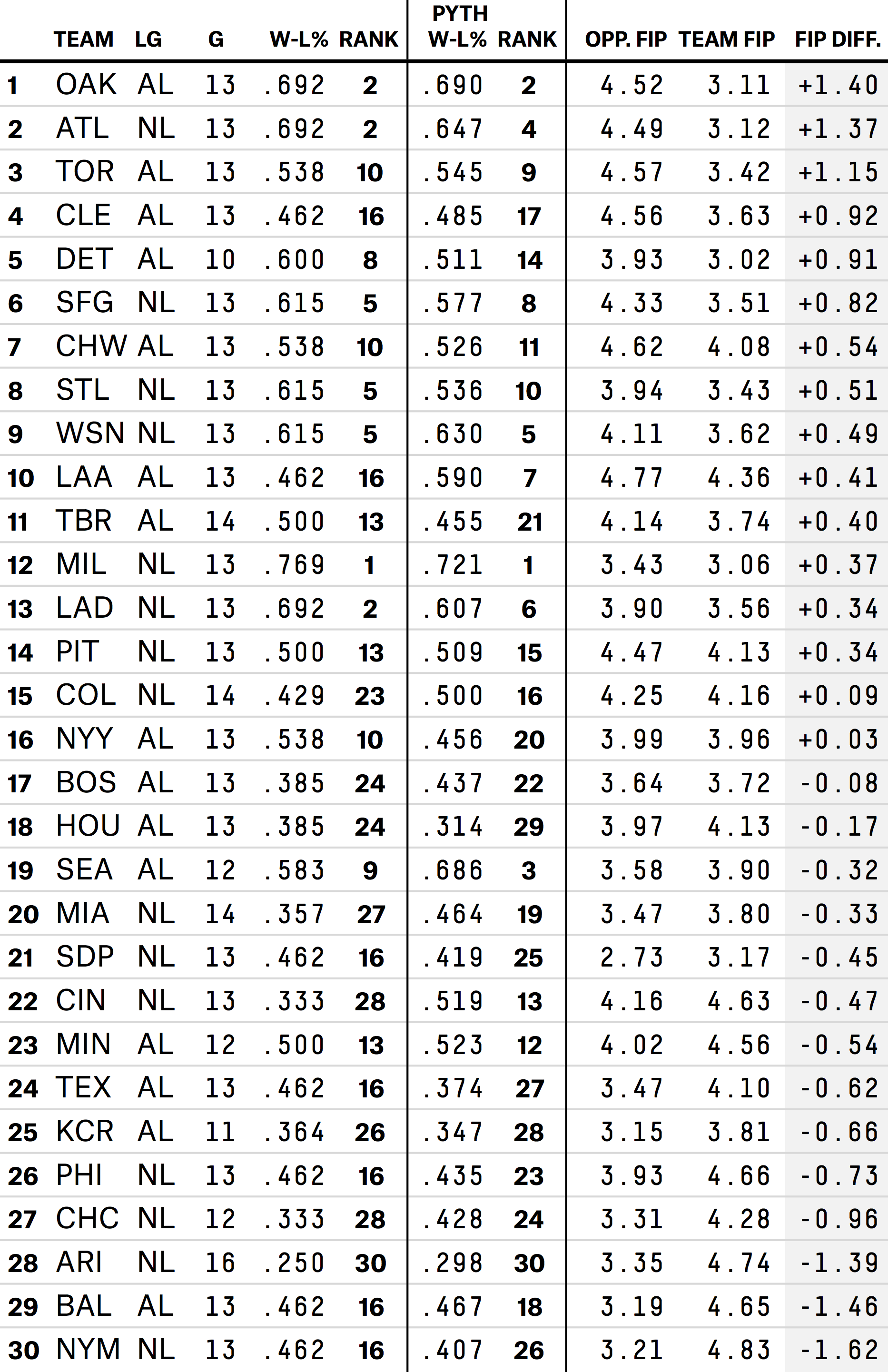