If you were a freshman entering college in 2010 and filed a sexual violence complaint with the Department of Education on your very first day, that investigation might still be open four years later.

That’s the finding from a Department of Education report made public on Tuesday by Sens. Barbara Boxer, Kirsten Gillibrand and Tim Kaine (Democrats of California, New York and Virginia, respectively), which revealed a growing backlog in the number of Title IX complaints made to the department.

The OCR gave several reasons for the prolonged investigations.

“[S]exual violence investigations tend to be complex and may involve systemic, campus- and institution-wide issues, in addition to issues pertaining to specific students,” the office wrote in a  letter to Boxer, noting that the investigation process for sexual violence complaints includes reviewing the institution’s historical responses to these complaints, interviewing school officials, meeting with individual students and student groups, and reviewing the school’s policies and training protocol. “As such, Title IX sexual violence investigations, on average, take longer to complete than those across other jurisdictions,” the letter said.

But the number of lengthy investigations coincides with an uptick in the overall number of complaints made, suggesting that the department may need more resources to handle the increase. In 2014, 102 complaints were filed against higher-ed institutions, compared with 32 in 2013 and nine in 2009. (As of April 8, 2015, the office had received 51 complaints this year.)

Despite the growth in complaints, the OCR’s staffing and budget levels have both decreased significantly over the years, as the office pointed out in its budget request for fiscal year 2016. One chart from the request shows the discrepancy between the office’s level of full-time equivalent positions (FTE)1 and the number of complaints that the office receives: 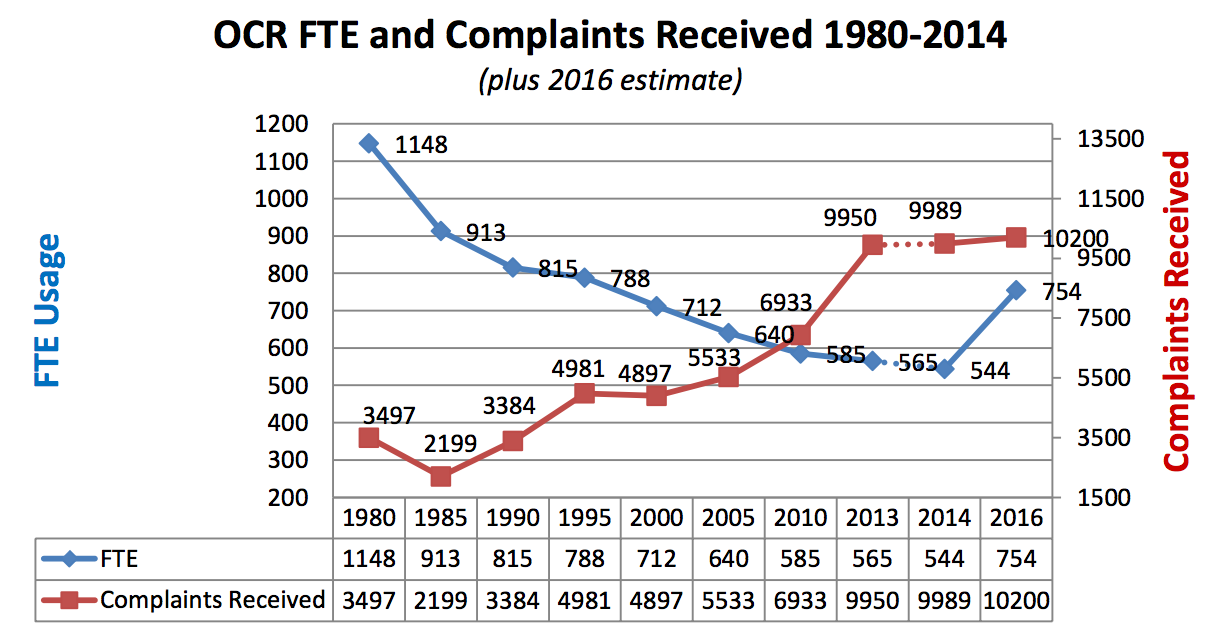 The OCR requested a budget of $130.7 million for the 2016 fiscal year — a 31 percent increase from its 2015 appropriation, the bulk of which would fund an additional 200 full-time equivalent positions.

“OCR expects that these average [investigation lengths] will decrease as the agency closes out its oldest sexual violence cases and if, as we hope, Congress increases OCR’s appropriation to allow OCR to manage its current and projected caseload,” the office wrote in its letter to Sen. Boxer.