The St. Louis Rams, Buffalo Bills and Minnesota Vikings combined to go 18-29-1 last season. This season, those three teams rank highest in Football Outsiders’ annual ranking of franchises according to the amount of under-age-25 talent on hand.

Should fans of those teams start planning for the Super Bowl in a few years? Is there evidence that teams ranked highly in such “young talent” indices see dividends on the field?

Football Outsiders has been compiling a similar list going back to 2010 (it used to include 25-year-olds in the assessments but doesn’t anymore). That doesn’t give us anywhere near the sample size we had when we looked at how well Baseball America’s annual organizational talent rankings predicted future team success, but we can begin to investigate whether there’s a relationship in the NFL between having a lot of young talent and winning down the road.

For the rankings released prior to the 2010 and 2011 seasons, the correlation against schedule-adjusted Pythagorean wins in the following three seasons was 0.021, meaning there’s practically no relationship between how highly regarded a team’s talent is and how well it does in the next three seasons. (Nerd note: Since Football Outsiders only ranks teams relative to one another, we need to run the Spearman rank correlation coefficient between a team’s young talent ranking and its ranking among NFL teams in schedule-adjusted Pythagorean wins for future seasons.)

But perhaps it’s unfair to include early seasons in that range. Teams with a lot of young talent usually acquired it through recent (high) draft picks, which typically implies a team might not be ready to win right away. If we toss out years one and two and only focus on the season three years in the future, the correlation does improve. But it’s still just a minuscule 0.080, which probably doesn’t inspire a lot of hope in the hearts of Rams, Bills and Vikings fans. 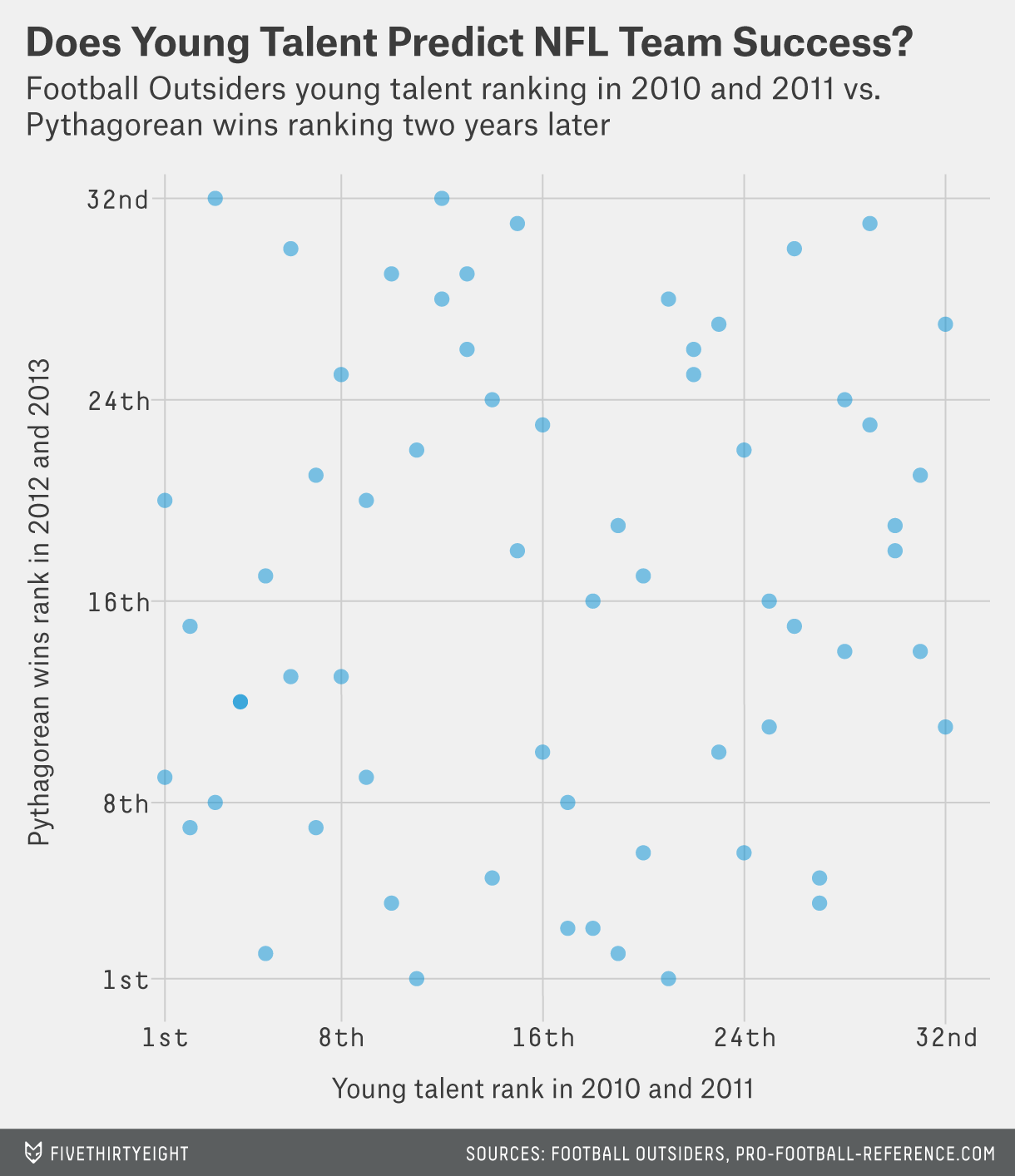 Now, it may be that it’s tough for young talent to move the needle on a roster that’s already bad. But if you control for existing team quality by regressing a team’s young talent ranking and its league ranking in schedule-adjusted Pythagorean wins from the previous two seasons against its performance three seasons into the future, neither predictor is statistically significant and the R-squared is essentially zero.

If you used the number of draft points a team spent the previous spring (using Chase Stuart’s draft value chart from Football Perspective), or the amount of Defense-Adjusted Yards Above Replacement generated by a team’s quarterbacks the season before, those rankings correlate better with a team’s performance three years into the future. The short schedule and interconnectedness of individual statistics in football make it difficult to judge who has talent in the first place, much less to project which teams will succeed because of it down the road.

Maybe these teams will buck the trend, or the rankings will appear more accurate as the sample grows. Certainly, a few years’ worth of rankings aren’t the final arbiter — in either direction — of whether future wins are related to a stockpile of what appears to be burgeoning talent. Theoretically, the two categories should be linked, but it bears mentioning that a similar analysis of young talent rankings and team results in baseball yields a very weak correlation, too. And that’s baseball, where projections are somewhat reliable; in general, the NFL is much more difficult to predict than MLB.