After the Brooklyn Nets’ dramatic victory in Game 7 of the first round of the NBA playoffs on the road (itself a rare feat), the team’s next challenge will be facing the defending champion Miami Heat.

The Heat are favored, with opening lines giving them around an 85 percent chance of advancing — and they’re relatively close to even money to take home their third consecutive championship. Miami’s 54-28 regular-season record was 10 games better than Brooklyn’s 44-38, and its 4.15 SRS (margin of victory adjusted for strength of schedule) led the East, while Brooklyn’s -1.58 SRS isn’t even better than average.

Brooklyn mainly has one thing going for it1: The team swept its regular-season series against Miami, winning all four games. Now, three of those four were decided by one point each, and the other went to double overtime, so it’s not as if the Nets had the Heat completely locked down. Still, if some teams match up better against certain teams than against others (independent of their relative strength), a result like this would make it more likely that Brooklyn is better — at least against Miami — than we might have thought.

Intuitions about the importance of such head-to-head records vary substantially: Some commentators and experts cite them liberally, while some stats types dismiss anything that’s based on so few games and/or that doesn’t regard every sport as a weighted random walk. The truth is that there’s a real and demonstrable value of head-to-head record relative to a team’s record against other teams. But that value is limited.

While Brooklyn winning four games out of four sounds impressive, it’s only two games above what we would expect to happen by chance. So to have any kind of significance, the relative importance of head-to-head results must be substantially higher than comparable results against other opponents.

On the other hand, if a team like Brooklyn “matches up well” against a seemingly stronger team like Miami, its chances of going 4-0 increase dramatically. For example, a team with a 30 percent expectation of winning one game will go 4 for 4 around 0.8 percent of the time, while a team that’s even money in each game will sweep around 6.25 percent of the time. Thus, as a Bayesian matter, going 4-0 makes it much more likely that you “match up well.”

That is, if “matching up well” is a real thing. And if it is, it should be a measurable statistical phenomenon. Which it is.

To examine this, I gathered all regular- and postseason games from 1985 through 2013. Then, with the goal of predicting each playoff game,2 I ran a logistic regression3 to estimate a given team’s chances of winning using the following variables:

The result of my calculations:6A prior win against an opponent should initially be weighted about 3.8 times (see coefficients in footnote) more heavily than a game against someone else. Since these games are already twice as valuable as other games by virtue of having both teams involved — a win by Team A is both one more win for it and one more loss for Team B — the bottom line is that previous head-to-head games are worth about as much as two non-head-to-head games per team (3.8/2=1.9).7

Using the coefficients from that regression output, we can create a logistic function8 to tell us the odds that a team with given relative strength will win a particular playoff game. 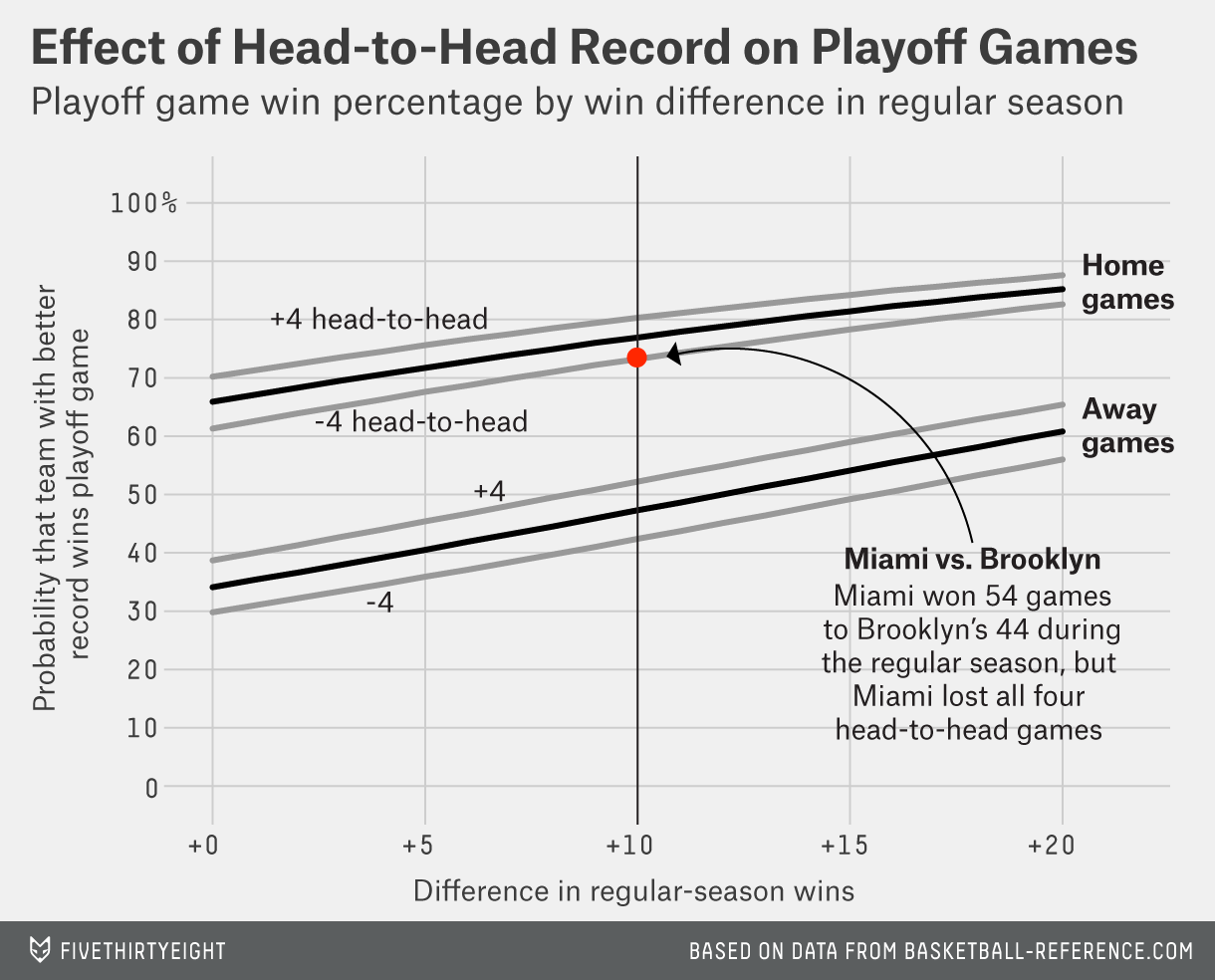 The x-axis is a team’s combined regular-season win differential against its opponent (using both head-to-head and non-head-to-head games). For example, Miami scores 10 against Brooklyn because Miami won 54 regular-season games to Brooklyn’s 44. The central black lines are the probabilities of winning home or away games based on win difference alone. The gray lines are the new probabilities when adjusted for a head-to-head difference of +4 or -4 (typically the best and worst possible).9

So depending on how strong the favorite is, going 4-0 against that team in the regular season can gain the opponent up to a 5 percent better chance of winning a particular playoff game than if the teams had gone 2-2 against each other, and an almost 10 percent higher expectation of victory than if the opponent had gone 0-4.

On balance, I think that’s a fairly pro-head-to-head development: Having a 5 percent better chance based on information from only four games that are already included in each team’s overall record is notable when dealing with razor-thin NBA margins.10

Compounded over the length of a series, this is enough to have a pretty significant effect on who advances and who doesn’t. 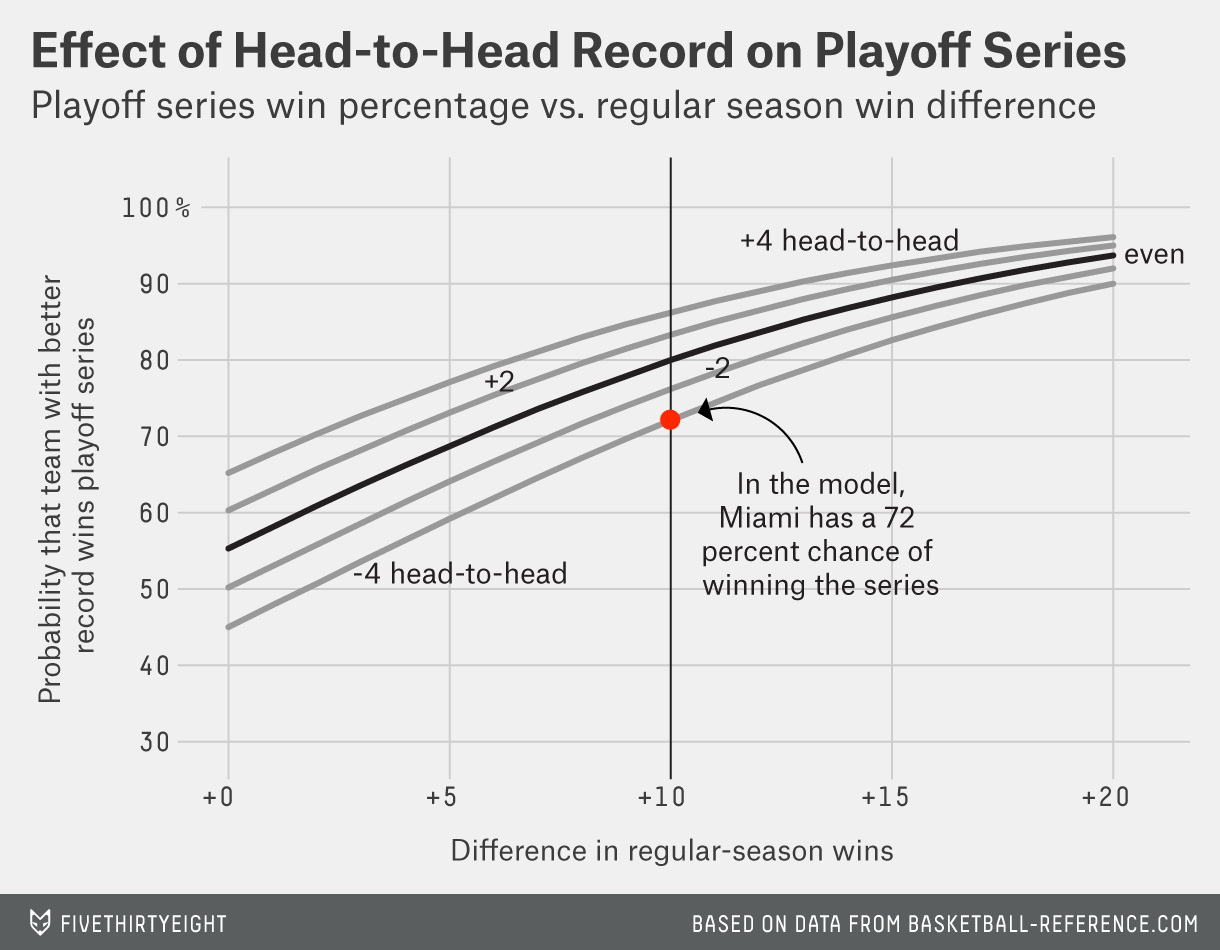 These are calculated series odds for the home team in a best-of-seven series (i.e., the binomial probability of winning at least four games out of four home games plus three away games given the home and away probabilities generated by our regression). There are a couple of things to note from this chart:

Finally, we can check how well our series estimates perform against actual results by running the same empirical analysis as above, except on series outcomes. 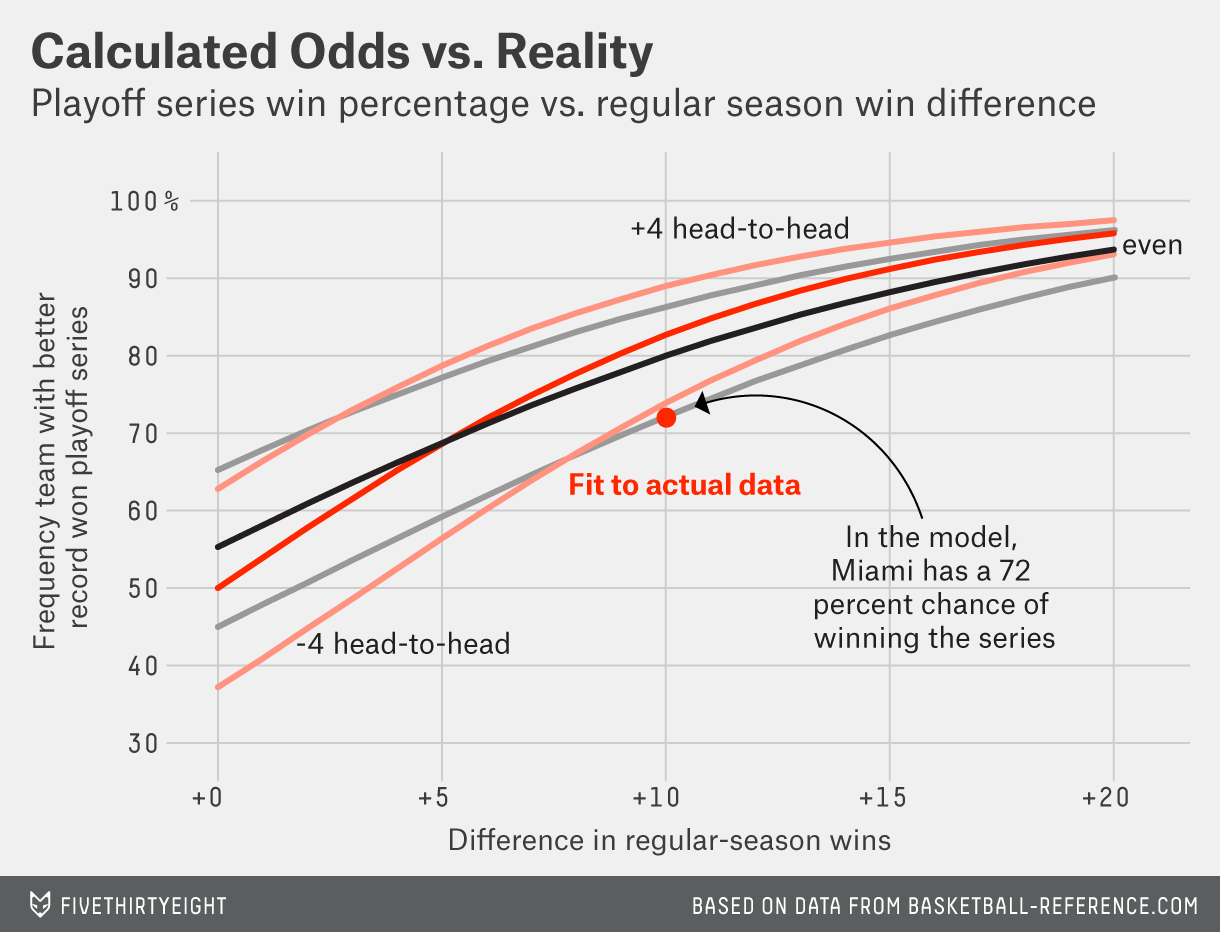 As a gut check, the fitted series results and the predicted series results are similar enough. I should note that the sample sizes are too small for these curves (and particularly the head-to-head breakdown) to be completely significant (this is why I used binomial calculations above instead). But this graph has a few interesting points as well:

Whether or not you find these results surprising, it’s clear that the effect is nowhere near strong enough to take a 10-game dog and make it a favorite. So no luck for the Nets, at least not from this angle.