When David Shaw informed his parents that he was Stanford’s new head football coach, there wasn’t a dry eye in the house. “Pride,” he recalled in an interview this offseason, “is such a small word for that feeling.”

Shaw remains at the helm nearly a decade later.

Stanford is where Shaw was a four-year letterwinner and where his dad was nearly elevated to head coach. It’s where Shaw met his wife and where he proposed; where he left and where he returned. The lockscreen on his iPad is a family photo taken among the eucalyptus trees on campus in 1975, then replicated some 35 years later. “To have so much of your life associated with a place,” Shaw told me, “is weird.”

An alma mater, Shaw contends, is an extension of home. In turn, its people — from the dining hall staff to the university board of directors — are akin to family. In 1957, Paul “Bear” Bryant left a winning program in College Station to return to Tuscaloosa, where the Alabama Crimson Tide had endured a fourth consecutive losing season. Why? “I’ve heard mama calling,” he told his players.

Hiring an alumnus1 has been a marketable, low-risk, high-reward strategy for athletic departments for almost a half-century. Unless a splashy move is feasible, if an athletic director seeks to turn around a program — or merely wants to sell more tickets — there are far worse blueprints to follow than returning someone to their roots. Which is perhaps why alumni have permeated the market for much of the modern era. Since 1975, 38 FBS football programs2 hired more than one alumnus as head coach.3 Over that period, there was only one season in which alumni didn’t hold at least 10 percent of the available head coaching gigs. 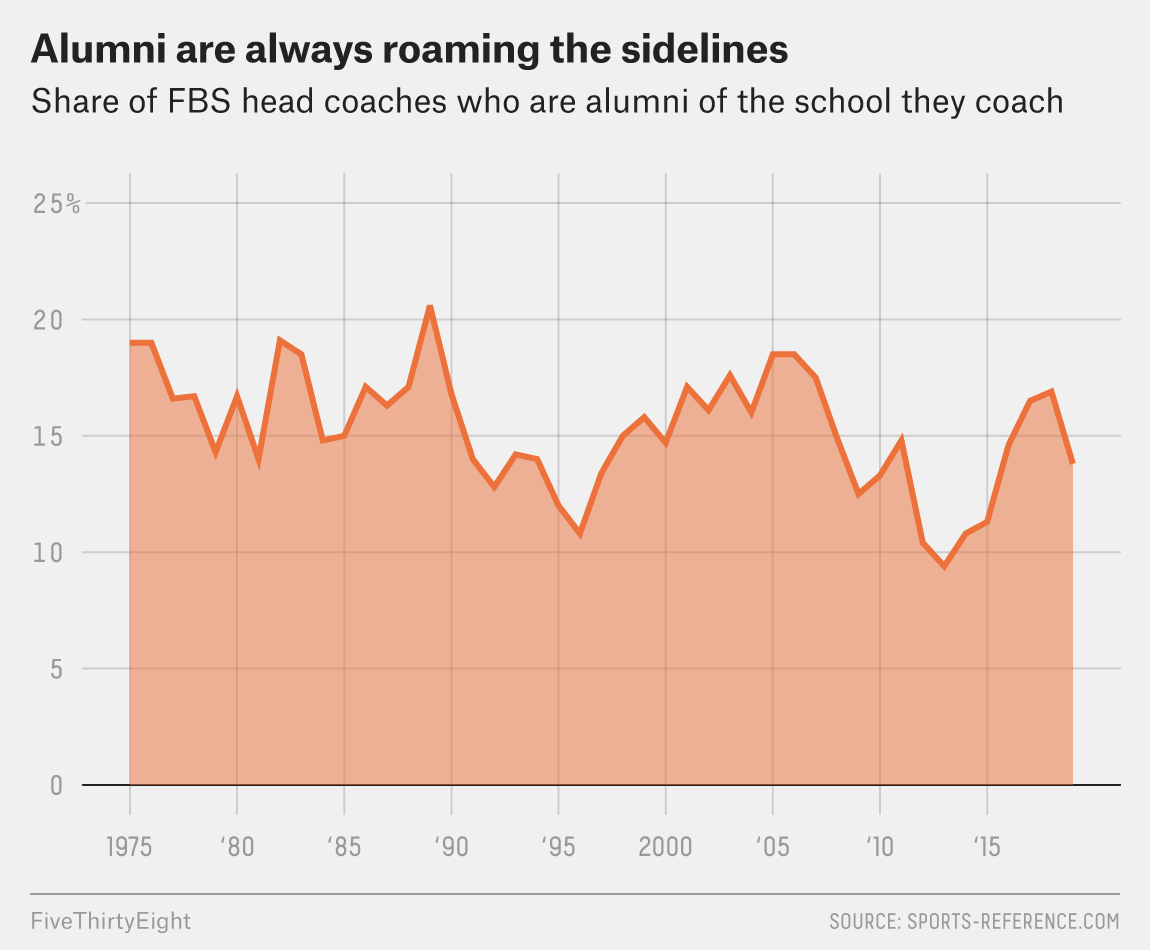 And recently, hiring from within has been a successful strategy. Alumni accounted for roughly a quarter of the coaches represented in last season’s final Top 25 rankings. This season, alumni will command 18 programs, or 13.8 percent of the market. The fraternity includes long-tenured stalwarts (Northwestern’s Pat Fitzgerald and Air Force’s Troy Calhoun) in addition to the more idiosyncratic personalities in the sport (Michigan’s Jim Harbaugh and Oklahoma State’s Mike Gundy).

Shaw was hired to “take the dips out of Stanford football.” He became the winningest coach in program history two years ago. But was the university seal on Shaw’s diploma in any way predictive of that success? And more broadly, does an alumnus traditionally make for an exceptional hire?

There were 27 head-coaching changes this offseason, but only one — Northern Illinois’s hiring of Thomas Hammock — involved an alumnus returning home. Hammock and 11 other head coaches — all non-alums — made their FBS coaching debuts over the weekend, while Miami’s Manny Diaz made his debut the previous Saturday.

If the recent success of certain high-profile alumni head coaches is predictive, Hammock should lead a successful squad in 2019. Kirby Smart’s Georgia Bulldogs were among the most efficient teams in the country. Fitzgerald led Northwestern to its first appearance in the Big Ten title game a third consecutive bowl game victory. Jeff Tedford coached Fresno State to its best season in school history. Scott Satterfield turned Appalachian State into the darlings of the Sun Belt and parlayed it into a job at Louisville. Bryan Harsin led Boise State to the Mountain West championship game for the second consecutive season.

In total, alumni head coaches went 159-122 (.566) in 2018. According to Sports-Reference.com’s Simple Rating System, the average alumnus-led program was 4.16 points better than the average team in 2018, the highest mark of any season since 1975. However, alumni-coached teams have also seen a broad range success relative to the average team in this time period. 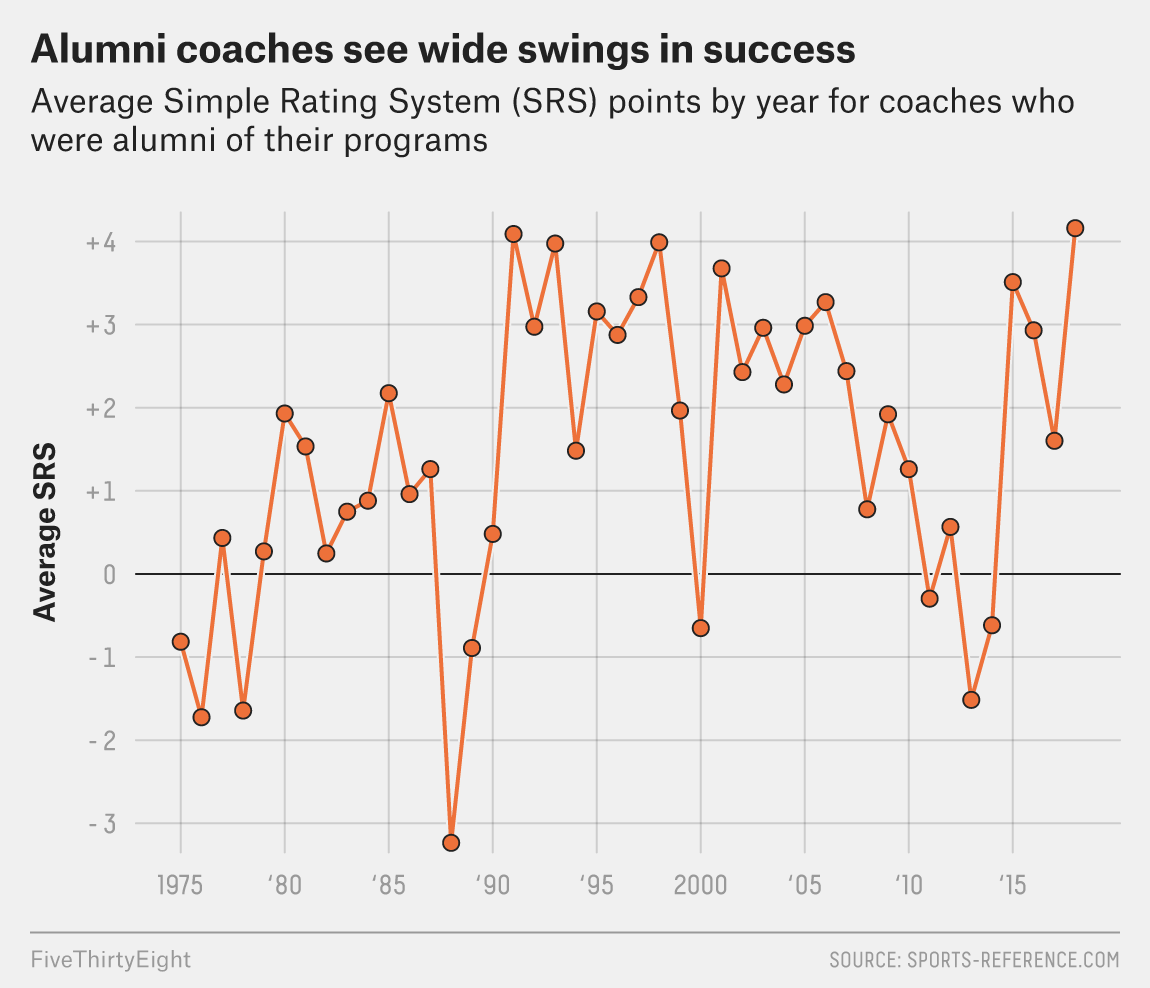 In addition to recent success, there are several qualities that make the alumni coaches unique. Alumni traditionally begin their college head coaching careers where they suited up. Of the 146 alumni head coaches from 1975 to 2018, only 26 (17.8 percent) had previous Division I head coaching experience. That has continued to be the norm. Since 2000, of the 53 alumni head coaches who were hired, all but eight were becoming first-time head coaches.

Hawaii head coach Nick Rolovich knew at some point in his career he’d return to Honolulu. It ended up being where he got his first crack as the man in charge. “One of my real goals in coaching is to repay Hawaii [for] what Hawaii as a state and a university gave me,” Rolovich said. “Which is everything.”

And once installed at the head of the program, alumni seldom leave. Of the aforementioned sample, more than 75 percent didn’t take another Division I head coaching gig after securing the job, and nearly 70 percent spent their entire college coaching careers at their alma mater.

Some alumni coaches attribute this trend to their one of their strengths: having already demonstrated an ability to represent the university well as a student-athlete. “It’s very easy for me to talk about Boise State,” Boise State head coach Bryan Harsin said. “I don’t need a map.”

“If you can have success, then hopefully they’ll be proud of you,” Fitzgerald said. “That’s the hope, at least.”

That isn’t to say there aren’t obstacles. The allure of returning home is countered by increased expectations, both from inside and outside the locker room. Happiness is fickle and patience wears thin when losses pile up. And sometimes winning isn’t enough, even at your alma mater. At Maryland, Ralph Friedgen was fired after going 9-4 and winning ACC Coach of the Year. He later burned his diploma.

“A lot of times, criticism is a faceless person,” Western Michigan head coach Tim Lester said. “But at your alma mater, sometimes it’s a little bit harder because you do know who they are.”

It can be a challenge to remember that it is, in fact, a job.

“You have to be able to mix the business side with the side where your heart is,” Rolovich said.

Regardless of the campus where a coach cut his teeth, the terms of employment remain clear. In college football, the long-term prognosis isn’t stable. “Either we’re going to get fired or we’re going to leave,” former Tulsa head coach Bill Blankenship said. Blankenship coached at Tulsa, his alma mater, from 2011 to 2014. “The odds of retiring at the school that hired you is a pretty low percentage.”

But is hiring an alumnus predictive in any significant way?

To measure how predictive hiring an alumnus is of on-field performance, I pulled all of the head coaches from 1975 to 2018 as well as their alma maters, their head coaching experience and their team’s SRS (as well as its previous season SRS), removing interims from the sample.6 Then I ran a linear regression. Controlling for the coach’s experience and the previous SRS of the team, coaches at their alma maters are statistically indistinguishable from non-alumni.

However, a team’s previous season SRS (0.72) is far more predictive of on-field performance — each point of SRS in a previous season is worth around three-quarters of a point in the current one. Furthermore, whether it was the first year of a head coach at a given school is also more predictive of on-field performance than whether they were an alumnus; being a newcomer is strongly negatively correlated with performance (-1.53 SRS).

Plus, despite the recent success they’ve had, in terms of historic single-season performance, alumni haven’t produced a ton. Of the 20 best single seasons, as defined by SRS, only one7 was coached by an alumnus.

Phillip Fulmer is the last coach to win a national title at his alma mater. That was in 1998. Since 1949, only Steve Spurrier, Bryant, Ralph Jordan and Frank Leahy can say the same.

When Shaw’s legacy is written, it will no doubt be penned in cardinal red.

But despite the recent tear of success, that indelible connection that he and fellow alumni head coaches have isn’t terribly predictive of future success.