In Tuesday’s post on Tim Pawlenty, whose approval ratings have declined significantly over the last six months, I mentioned that it has been “a rough time for governors in general”. This is true — but I didn’t realize quite how rough the times have been.

SurveyUSA regularly tracks gubernatorial approval in about a dozen states. The chart below provides each governor’s approval ratings as of late last month as compared to six months earlier (late October, 2008) and one year earlier (late April, 2008). 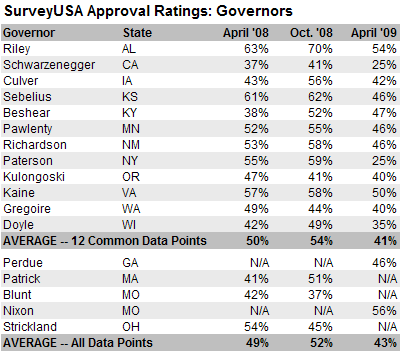 From among the 12 data points that are common to all three surveys — these are Bob Riley of Alabama, Arnold Schwarzenegger of California, Chet Culver of Iowa, Kathleen Sebelius of Kansas, Steve Beshear of Kentucky, Pawlenty, Bill Richardson of New Mexico, David Paterson of New York, Ted Kulongoski or Oregon, Tim Kaine of Virginia, Christine Gregoire of Washington, and Jim Doyle of Wisconsin — the average approval rating has dropped from 50 percent a year ago and 54 percent six months ago to just 41 percent currently. All of these governors but Beshear have a lower approval score than they did a year earlier (although Jay Nixon of Missouri, who was elected in November, is doing significantly better than predecessor Matt Blunt).

Certainly, a number of these governors have had extraneous circumstances which may be negatively impacting their their ratings. David Paterson lost New Yorkers with his confused handling of naming a replacement for Hillary Clinton. Sebelius — not without controversy — just became a member of Obama’s cabinet. Richardson was supposed to have been too, but flunked his vetting process. Kaine — while not giving up his day job — has become head of the DNC. Pawlenty has had the Franken affair to deal with (although, certainly, with this extra bit of context, it is much harder to attribute the decline in his approval to his handling of the recount).

Still, the decline appears to be widespread enough that excuses like this just won’t cut it — America is unhappy with their governors. And why shouldn’t they be, when nearly every state has a budget deficit, and governors — unable to raise revenue as the Federal Government does through deficit spending — are faced with the Hobson’s choice of either having to raise taxes or cut essential services during a recession?

With Democrats controlling 28 of 50 statehouses, Republicans would seem to be in a good position to gain back ground in 2010. Many states, besides, even under better times, have a tendency to alternate the party they like seeing elected to the governor’s mansion.

On the other hand, of the 22 Republican governors, at least seven (Sarah Palin of Alaska, Charlie Crist of Florida, Bobby Jindal of Louisiana, Tim Pawlenty of Minnesota, Haley Barbour of Mississippi, Mark Sanford of South Carolina and John Hunstman Jr. of Utah) are considered serious contenders for a Presidential bid in 2012 or beyond. From that list, Palin, Crist and Palwenty are up for re-election in 2010. Although Palin and Crist began with extremely high approval ratings and probably stand to be re-elected in any event, it is not surprising that both have considered bolting for the Senate. Nor is it surprising that Sanford, who publicly engaged in a war of brinksmanship with his state legislature over his proposed rejection of some $700 million in federal stimulus monies, is not up for re-election, thereby giving him the freedom to posture before a national audience.

Here’s one prediction: at least one serious contender for the Republican nomination in 2012 will be someone newly elected to his or her state’s governorship in 2010. Assuming that the economy has begun to turn around by that point, that person stands to get credit for a recovery that they had little to do with — they will be able to cut taxes or to restore services, and will inevitably be hailed as a genius for having turned a billion-dollar deficit into a surplus. But for gubernatorial incumbents, for whom the opposite dynamics hold, it may be rough sledding ahead.