Welcome to FiveThirtyEight’s politics chat. The transcript below has been lightly edited.

sarah (Sarah Frostenson, politics editor): This is it — the last presidential debate — and, as we’ve said in our presidential forecast for a while now, President Trump is running out of time. Joe Biden has a double-digit lead in national polls and has gotten a number of good state polls in the past few days.

We still expect the race to tighten here in the home stretch, and a debate is a great way for that to happen. But it’s also true that the last two weeks before an election don’t necessarily change the race all that much.

So, let’s start there. How big are the stakes going into tonight?

nrakich (Nathaniel Rakich, elections analyst): The stakes are kind of big but also kind of not?

On the one hand, it’s the last obvious opportunity for Trump to win voters over and for Biden to screw up. On the other hand, I think the writing is on the wall for Trump.

Granted, our presidential forecast still gives him a 13-in-100 chance of staging a comeback. But Trump just hasn’t shown any inclination to change his base-first strategy. He’s also been behind Biden for a while now in our forecast:

I guess I’m just not counting on seeing a different Trump tonight from the one who bombed in the first debate.

kaleigh (Kaleigh Rogers, tech and politics reporter): It’s rare for debates to have large, lasting impacts on the polls at the best of times, so it’s hard to imagine a scenario where this debate upends things in a dramatic way.

geoffrey.skelley (Geoffrey Skelley, elections analyst): Given how rare live events are in the COVID-19 era, though, it’s not impossible that something could come out that reflects poorly on Biden. So, in that sense, it is a big deal.

At the same time, a national poll from The Economist/YouGov found this week that Biden led 52 percent to 43 percent among likely voters, and that only 4 percent of those voters said they might change their minds. So, unless Trump can win over the incredibly small number of voters who genuinely are unsure — there are a lot fewer undecided voters this year — it’s going to be tough to win the election. And I’m not sure much can happen that’s going to shift public opinion sharply.

Over 25 million have already voted, but this is what pollsters expected: Nate Silver

kaleigh: Like Nathaniel, I’m curious to see whether Trump changes his strategy at all. Obviously, the muted mics will limit how much he can talk over Biden, but arguably, that tactic didn’t work so well. At least one poll found the majority of respondents disapproved of Trump’s behavior in the last debate, and even some Republicans said it made them support him less afterward.

nrakich: I’m not so sure the muted mics will make a big difference, Kaleigh. Maybe we won’t be able to hear Trump’s interruptions, but Biden will. And that could trip Biden up or stop him mid-answer.

sarah: Saying Trump bombed is a bit harsh, though, Nathaniel. After all, Clinton “won” the 2016 debates, and we saw how that turned out.

It’s easy to get obsessed with comparisons to 2016, and as we’ve written, you shouldn’t make too much of one election — after all, it’s a sample size of one. That said, there are some pretty big differences from 2016, yes?

kaleigh: Well, there’s the pandemic. That’s a pretty stark contrast. It has changed how we vote, how candidates campaign, how the economy is doing and so much more.

I wonder how different this election would be compared with 2016’s if COVID-19 hadn’t happened.

geoffrey.skelley: Well, as that Economist/YouGov survey and others have shown, this election has far fewer undecided or third-party voters, which makes it harder for the debates to move mountains.

In FiveThirtyEight’s national polling average, Biden and Trump’s combined support adds up to about 94 percent. But at the same point in 2016, Trump and Clinton totaled just about 86 percent — a lot more voters were in play even in the late stages of the campaign. The same is true in state-level polls as well. For example, around 95 percent of voters in Wisconsin are backing Biden or Trump in our polling average, whereas 86 percent of voters there said they supported Trump or Clinton at this point in 2016.

nrakich: Not to mention, Biden’s lead is simply bigger than Clinton’s was at this stage of the 2016 campaign.

As of Wednesday afternoon, Biden led by 9.9 points in our national polling average; 13 days before Election Day in 2016, Clinton would have led by an average of 6.4 points, using the same methodology.

Something else that I think makes tonight’s debate less important: At least a quarter of voters have probably already cast their ballots. According to statistics collected by political scientist Michael McDonald, more than 41 million early or absentee votes have already been cast, or 30 percent of 2016 turnout (although 2020 turnout could be much higher if voter enthusiasm is any indication). So, even if something big happens tonight, a lot of people will have already voted.

geoffrey.skelley: That’s true, Nathaniel, but it could be that those early voters would have voted already anyway, as studies have shown that voters who vote early are more likely to be very partisan. Or, put another way, maybe those people weren’t going to change their minds anyway.

sarah: Those are all really good points — especially Kaleigh’s, about what this election would have looked like if COVID-19 hadn’t happened. What could we be missing, though? (And one big reason why comparisons to 2016 have their limitations!)

nrakich: Well, it’s always possible there will be a polling error.

So, if the debate budges the polls just enough — say, to where Biden has a 4-point national lead instead of a 10-point one — that makes it significantly more likely that Trump could win.

If Biden stays at +10 nationally, though, it would take a truly bonkers polling error to save Trump.

kaleigh: There are also more conventional differences. For example, this election has an incumbent candidate.

geoffrey.skelley: Speaking of polling error — and whether we could have a “Dewey Defeats Truman” on our hands — pollsters have tried to account for some of the things that led to problems with state polls in 2016. For example, some are weighting their samples by education, or even education and race, to avoid underrepresenting white voters without a college degree, voters who went so strongly for Trump in 2016.

So, some state polls could be better this time — although, of course, it’s impossible to predict the direction of a polling error before an election.

sarah: OK, back to the debate. The rules have changed, as Kaleigh and Nathaniel were mentioning earlier, and now the moderator can mute the candidates if they speak out of turn. Here’s a snapshot of the six issues they are expected to stick to:

What do we think might be covered by these issues? What plays to Biden’s strengths? And Trump’s?

geoffrey.skelley: Well, I’m going to go out on a limb and say that “fighting COVID-19” is not going to go well for Trump because Americans generally think he’s done a poor job handling the pandemic. That leaves Biden with a lot of material to work with.

nrakich: Yeah — according to our poll with Ipsos before the last debate, respondents who said COVID-19 was their top issue said 78 percent to 20 percent that Biden was better on handling COVID-19. And that was before Trump announced he had tested positive for COVID-19.

kaleigh: Trump has already been trying to positively spin his bout with the coronavirus — he’s been through it! He survived! But it will be pretty easy for Biden to point out that Trump didn’t take the virus seriously since he actually caught it. Not to mention, many Americans don’t think Trump took enough COVID-19 precautions, and there are signs that this hurt him electorally.

nrakich: I’m curious what the “American families” segment will touch on … does anyone have any inkling what that means?

geoffrey.skelley: 🤷‍♂️ Perhaps it’s a roundabout way of saying the economy. Kitchen table issues. Of course, the economy touches almost every topic to some extent.

kaleigh: That’s my bet, Geoffrey, but it’s just vague enough to be uncertain.

sarah: My money is on the suburbs.

Or, at the very least, I can imagine suburban families being mentioned by both Biden and Trump. Trump won suburban voters in 2016, but he’s in real trouble here in 2020, as many white suburban women are continuing to move away from the Republican Party, as we saw in 2018. 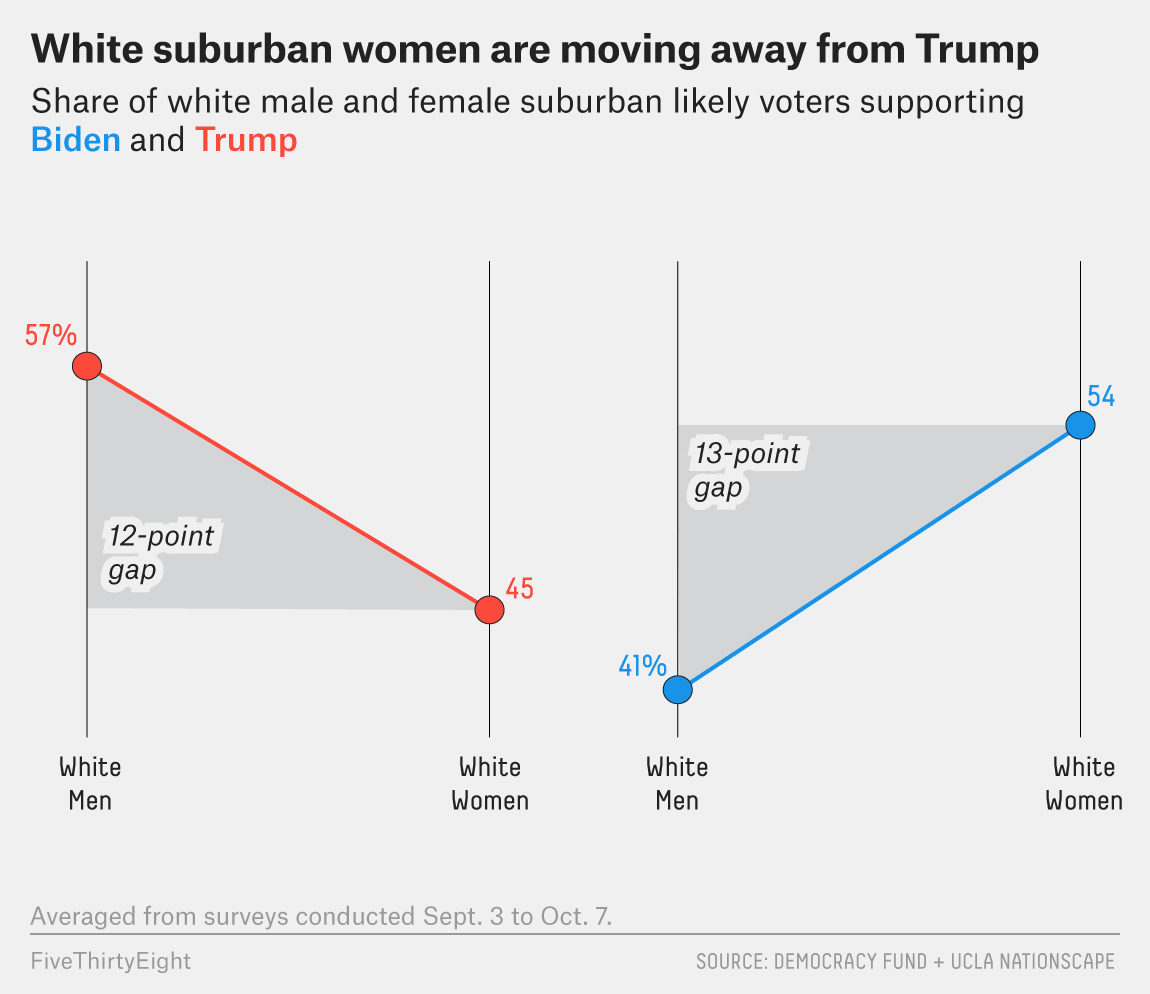 But, yeah, given the economy ranked as voters’ first or second issue, according to our polling with Ipsos, I think that’s right, too, Geoffrey and Kaleigh.

The economy is one issue where Trump has always had an advantage.

nrakich: “Climate change” and “race in America” also seem like good issues for Biden. According to that Ipsos poll, more than 90 percent of Americans who said climate change or racial inequality was their top issue trust Biden more than Trump on each issue respectively.

On the other hand, among those for whom violent crime is their top issue, the majority trust Trump more than Biden, by about 81 percent to 18 percent. So Trump might try to reframe the segment on race in America into one about rioting and looting.

As for national security, I think it’s fair to say that segment will move the fewest votes. American elections generally aren’t decided on foreign-policy grounds.

FiveThirtyEight Politics Podcast: What full Democratic control would look like

kaleigh: Honestly, is there anything in that lineup that isn’t well-trodden territory at this point?

sarah: Yeah, it is hard to imagine that any of the issues discussed tonight will cover new ground in a way that sways voters. They do feel like well-trodden talking points at this stage, and the reality remains that Trump really does need the polls to tighten. Otherwise, his odds in our forecast will continue to fall. But, of course, even a 5 percent chance of something happening is something you should take seriously.

OK, the stakes are high. Trump needs some movement in the polls, and Biden isn’t a safe bet. What will you be watching for tonight, and in the last week of the election — knowing, of course, we’re all kind of flying blind?

nrakich: To me, the big question is, can Biden maintain his 10-point national lead after this debate? Or will tonight “reset” the race and bring the polling average down to Biden +7 or so, which is where it has been for most of the year?

Even if that were to happen, Biden would still have a good chance of winning, but the size of his margin could determine things like whether Democrats win the Senate or the number of state legislatures Democrats flip.

geoffrey.skelley: It’s true that incumbent presidents have had a habit of struggling in first debates, only to come back stronger in later ones. This was true of Barack Obama in 2012 and Ronald Reagan in 1984. So don’t count out a much better showing from Trump tonight.

CORRECTION (Oct. 22, 2020, 11:25 a.m.): This chat has been updated to better reflect the findings of the FiveThirtyEight/Ipsos survey. The share of respondents who trust one candidate over the other on certain issues was among only respondents who named that issue as the top concern facing the U.S. today, not among all respondents.