There are a lot of theories as to why Mr. Obama’s approval ratings have been unchanged in the wake of these controversies, which some news accounts and many of Mr. Obama’s opponents are describing as scandals. But these analyses may proceed from the wrong premise if they assume that the stories have had no impact. It could be that the controversies are, in fact, putting some downward pressure on Mr. Obama’s approval ratings — but that the losses are offset by improved voter attitudes about the economy.

I first put forth this hypothesis on Sunday, but Jon Cohen and Dan Balz of The Washington Post have advanced some tangible evidence on its behalf. In the latest Washington Post survey, Mr. Obama’s approval rating on the economy is 48 percent — up from 44 percent in April. This follows a series of surveys showing that consumer confidence is at or near its highest point since Mr. Obama took office. The economic mood may have been lifted by two highly visible indicators — record-breaking stock prices and rebounding housing prices — along with a series of improved jobs reports.

In the graphic below, I’ve compared Mr. Obama’s approval ratings on the economy to his overall approval rating in Washington Post surveys dating back to the beginning of his presidency. As you might expect, the two ratings are highly correlated. There is undoubtedly a strong causal relationship as well, although keep in mind that the causality can potentially go in both directions. (Voters who are satisfied with the economy will tend to view Mr. Obama more favorably over all, but those who are happy with his overall performance may also tend to take a more favorable view of his impact on the economy — the so-called halo effect.) 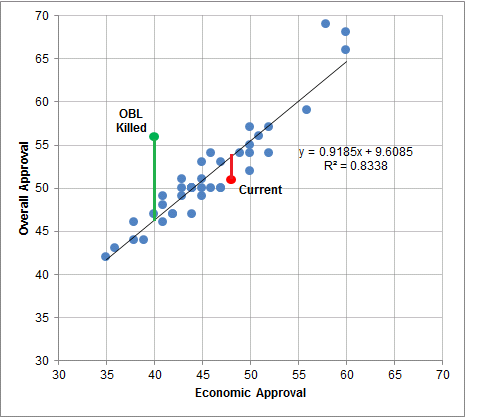 There is one significant outlier in the chart, which reflects an occasion on which Mr. Obama’s approval ratings were much higher than you might expect given views about his economic performance. That was in May 2011, just after the mission that killed Osama bin Laden, when a Washington Post poll put Mr. Obama’s overall approval rating at 56 percent despite just 40 percent approval on the economy.

The latest readings from the Washington Post poll aren’t nearly as dramatic as that instance — but there is a milder version of this same phenomenon working in the opposite direction. In other words, Mr. Obama’s approval rating in the new Washington Post poll is a now bit lower than you’d expect based on where voters rate him on the economy.

A version of this article appears in print on 05/22/2013, on page A19 of the NewYork edition with the headline: Obama’s Ratings May Be Buoyed By Economy.