A new survey from Pew Research which suggests that a declining number of Americans support the option of abortion in all or most cases is receiving a fair amount of attention. But is there actually any evidence that public sentiments on abortion are changing?

In my opinion, probably not — and if there is change in public opinion, it is occurring very slowly. The chart below is populated with data from PollingReport.com and incorporates data from eight organizations — ABC/Washington Post, Quinnipiac, Pew, LA Times/Bloomberg, AP/Ipsos, CBS, NBC/WSJ and CNN — that ask respondents a four-option question about abortion, where they are given a choice between saying abortion should be legal in all cases, legal in most cases, illegal in all cases, or illegal in most cases. We then draw a linear trendline through the individual datapoints. 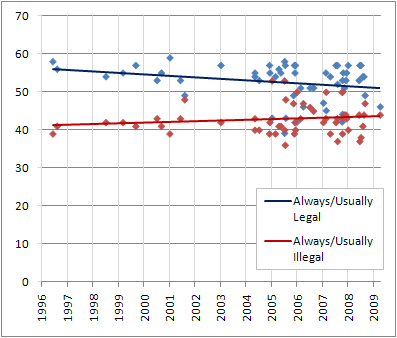 Although two recent surveys — the Pew poll conducted last month and an NBC/WSJ poll conducted in September — indicated smaller-than-usual margins for the legal option, this is countered by a large amount of data from earlier in 2008 which indicated support for legal abortion at about its typical levels in the mid-50’s. While it’s possible that public opinion has shifted more dramatically on this issue since sometime late last year, it seems highly unlikely. Polls don’t move without reasons, and abortion hasn’t been particularly in the news of late. Who knows — maybe Baby Trig won over a few hearts and minds — but odds are the Pew result is a mild outlier. Since the abortion choice question is surveyed quite frequently, we will know soon enough.

As far as a longer-term trend goes, you can arguably perceive a slight one in favor of those saying abortion should be illegal. On the other hand, if we look at a different type of survey question — those asking the respondent to identify as pro-choice or pro-life — we do not perceive any such pattern: 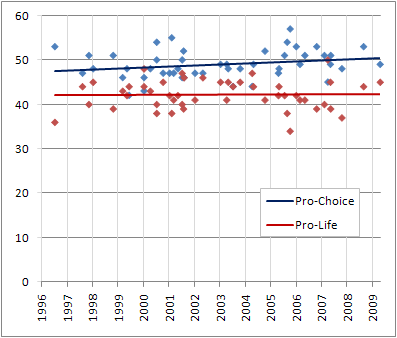 Or, if you like, we can combine the two types of surveys onto one graph: 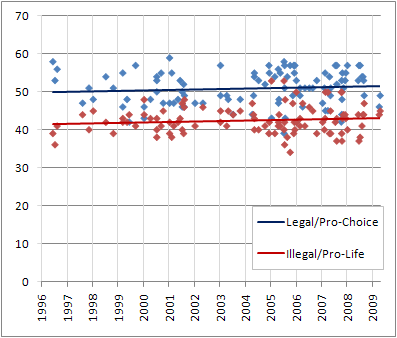 There’s just no trend at all there, except maybe toward slightly more people having an opinion, one way or the other, about the abortion choice question.

In fact, the remarkable thing about abortion is precisely how steady public opinion has been on it for many, many years. Perhaps this in and of itself is interesting — as Ross Douthat pointed out, there is some decent evidence that Gen Y’ers are less inclined to take the pro-choice position than Gen X’ers or Baby Boomers — although they are still more pro-choice than the voters they are gradually replacing in the voting pool, which are members of the Silent Generation. This is in spite of the fact that young Americans are considerably more liberal than their peers on issues like gay marriage and marijuana legalization, issues on which there is more tangible evidence of “momentum” in favor of the liberal position. There are evidently an increasing number of pro-life, pro-gay marriage Americans, particularly among Generation Yers, a position it would have been very unusual to encounter just a few years ago.