In an earlier post, I noted that President Obama’s approval rating was higher than a model of presidential approval predicted — something that seemed to set him apart from previous presidents. In response, commenters here on FiveThirtyEight and The Monkey Cage (see also Jay Cost) noticed that, for most presidents from Dwight D. Eisenhower until Mr. Obama, the model’s predicted approval rating was consistently lower than the actual approval rating. In this post, I want to do four things:

In my earlier post, I did this by including a variable for each presidential administration from Eisenhower to George W. Bush. I did not include a variable for Harry S. Truman, since the model cannot have a set of factors that perfectly predict each other — and given that the presidential approval data start in 1948 and end in 2008, knowing that the president is not Eisenhower up through George W. Bush means that you can perfectly predict that it must be Truman. (See the “dummy variable trap.”) Instead, Truman’s approval rating would be reflected in the model’s intercept — that is, the estimated approval rating when the other variables in the model equal zero and when the president is none of Eisenhower through George W. Bush.

The problem arises because the intercept is part of the prediction of Mr. Obama’s approval ratings. And because Truman was unpopular during his second term — on average, only 39 percent of Americans approved of him — the intercept is deflated. Thus, the model’s predictions for Mr. Obama and most other presidents would tend to be lower than their actual ratings, simply because most presidents have been (on average) more popular than was Truman during his second term. This is what commenters noticed. After further reflection, I believe this feature of the model was a mistake. I thank commenters for making me think harder about this. (And now might be a good time to remind readers, especially those reading via RSS, that the “I” is not Nate Silver but John Sides, a guest blogger.) This is a nice example of how online commentary about articles can generate important insights.

A better model would essentially average the idiosyncratic factors of each president to generate a baseline against which Mr. Obama’s approval could be evaluated. One way to do that is to estimate a fixed-effects model. In this model, the intercept becomes the average of the approval ratings of the presidents besides Mr. Obama, again assuming that any other factor in the model is equal to zero. Using this model, and including the same economic and other factors as in the original model, I can again generate an out-of-sample prediction for each president from Truman through Mr. Obama (click image to enlarge): 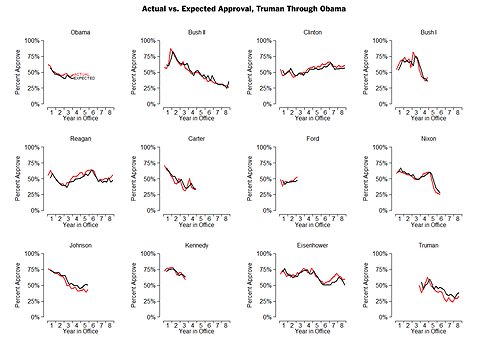 So what about Mr. Obama? Here is a graph just of his actual and expected approval ratings. 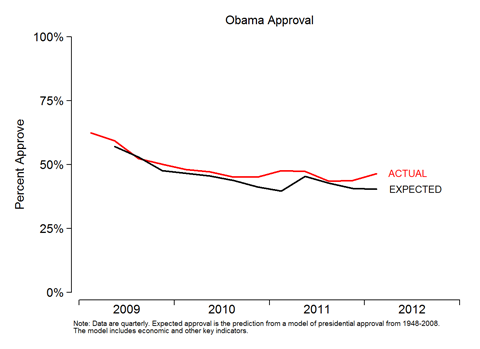 As in my original post, Mr. Obama is generally more popular than he should be. But his approval rating exceeds the prediction by about 2.7 points, on average, not by the nine points I originally reported. In certain quarters, his approval rating does exceed expectations by a larger amount — for example, by eight points at the beginning of 2011, when gross domestic product grew very slowly and inflation increased somewhat, but his approval rating remained steady. His rating is also six points larger than expected in the first quarter of 2012, which is the most recent quarter in which the economic data is available. Indeed, over the past three quarters, there is a hint that the gap between Mr. Obama’s expected approval and his actual approval is beginning to grow.

Mr. Obama’s better-than-expected popularity arises largely because he is more popular with Democrats and independents, but not Republicans. Using historical presidential approval data broken down by party, I estimated the same model and compared its prediction to Mr. Obama’s actual approval among Democrats, independents and Republicans (click on image to enlarge).

Of course, these results aren’t necessarily surprising. As the political scientist Gary Jacobson has documented, presidential approval ratings are increasingly polarized by party. This has certainly been true of Mr. Obama. But the very forces of partisan polarization — the “red America” and “blue America” — that Mr. Obama deplored as a presidential candidate may have buoyed his approval rating as president.