In 2008, Barack Obama presented himself as a fresh face on the scene not only to Americans but to citizens of the world. Given his racial identity and name, he certainly wasn’t the kind of president people around the world expected to win the presidency. Traveling in four very different countries on behalf of the State Department last year to talk about the presidential election–Egypt, Saudi Arabia, Brazil and South Africa–most people I met expressed two sentiments: one, that they wanted Obama to win; and two, they were convinced Americans would never elect him. 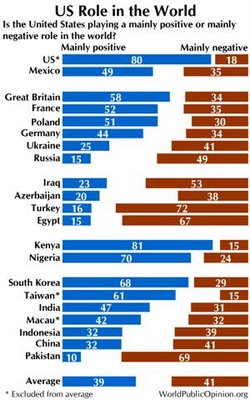 Now that we have, has global opinion about Obama and the United States changed accordingly? According to a new poll of citizens from 20 countries (including the United States) by World Public Opinion.org, the respective answers are “yes” and “no”: Obama is viewed mostly positively, but attitudes toward America generally are not improving much, if at all, in most countries.

Not surprisingly, views about the role the United States plays in the world are generally more favorable in the African and western European countries surveyed. Equally unsurprising is the fact that citizens in Muslim nations view us warily. Among non-Muslim countries in Asia, citizens in South Korean, Taiwan and India view America’s role quite favorably, with the Chinese slightly unfavorable overall.

The report summary reads, in part:

Asked whether they have confidence in Barack Obama to “do the right thing regarding world affairs,” for all nations (excluding the US) an average of 61 percent say they have some or a lot of confidence.

But asked how the US treats their government, few–on average just one in four–say it “treats us fairly,” while two-thirds say that it “abuses its greater power to make us do what the US wants.” Overall, these views are no better than they were in 2008. Only three countries diverged from this view (Kenya, Nigeria, and Germany).

In all nations polled, majorities say that the US “use(s) the threat of military force to gain advantages.” Majorities range from 61 percent in India and Poland to 92 percent in South Korea and include America’s close ally Great Britain (83%). On average, across all nations polled, 77 percent perceive the US as threatening. Even 71 percent of Americans agree.

Steven Kull, director of WorldPublicOpinion.org comments, “Most people around the world seem to have a positive view of the young new captain at the helm of the American ship of state, though many people see this huge ship as still carrying forward domineering policies.”

Of course, a favorable view of the American president is neither necessary nor sufficient to creating a favorable view of the United States. But it doesn’t hurt. And surely Obama cannot be expected to change global opinion in just six months. Considering how much damage George W. Bush did to global attitudes toward the United States, if there’s any chance for these numbers to improve, Obama’s global popularity is a start.