Looking at head-to-head polls can be treacherous so far in advance of a presidential election. Instead, I’d suggest that you devote most of your attention to President Obama’s approval ratings and perhaps the favorability ratings of the Republican candidates, as well as to things like economic forecasts.

But that doesn’t mean the head-to-head polls should be entirely ignored. Every bit of information is potentially useful — and besides, things like approval ratings and economic forecasts are fairly crude tools at this stage too. Approached with sufficient caution, the head-to-head polls can probably provide some insight as to how different types of Republican candidates would fare against Mr. Obama, especially if you account for the name recognition disparities that some of them face.

Since March, pollsters have done surveys on a total of 20 distinct potential Republican opponents for Mr. Obama, as well as an unnamed or “generic” Republican candidate. Rarely has the Republican candidate led in these polls, although Mitt Romney and the generic Republican have been occasional exceptions and some candidates come much closer than others.

The table below provides an average of those polls, but with a couple of twists. First, when the same polling firm has surveyed a matchup multiple times, each of these polls are averaged together. Second and more importantly, I have applied a version of our adjustment for house effects, which are persistent partisan leans within the polls either for or against Mr. Obama. (Rasmussen Reports polls, for instance, tend to have somewhat Republican-leaning results, while polls from Ipsos have tended to show very favorable results for Mr. Obama.) This provides for a more apples-to-apples comparison, particularly for candidates who have been polled by some firms but not others. The polls also show consistent differences in the number of undecided voters, so a similar adjustment is applied for this. 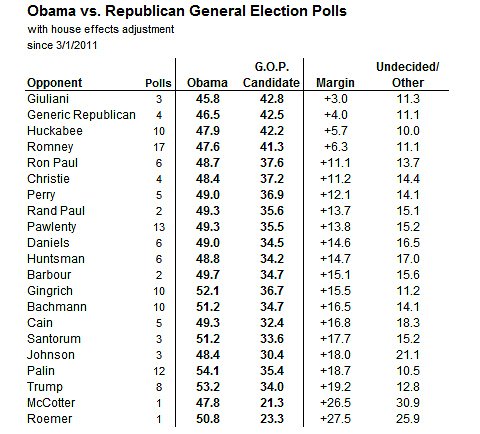 The polls find that three Republican candidates — Mr. Romney, Rudolph Giuliani and Mike Huckabee — poll consistently better than the others, usually trailing Mr. Obama by single digits while the other candidates trail him by double digits. Unfortunately for Republicans, Mr. Huckabee has decided not to run for president, and Mr. Giuliani is unlikely to win the nomination even if he does. Only Mr. Giuliani, who polls an average of 3 points behind Mr. Obama after the adjustments are applied, outperforms the unnamed Republican, who trails Mr. Obama by an average of 4 points.

One other thing you might notice, however, is that some of the Republicans who trail Mr. Obama by the widest margins — like Representative Thaddeus McCotter of Michigan — have extremely low name recognition, which is reflected in the high number of undecided voters when they are surveyed.

In fact, the more undecided voters there are in a poll, the better Mr. Obama tends to do. But this isn’t really good news for him since it implies that his standing will deteriorate some as these Republicans become better known. Specifically, based on the regression line in the chart below, it appears that for every six undecided voters who commit to a candidate, five commit to the Republican: 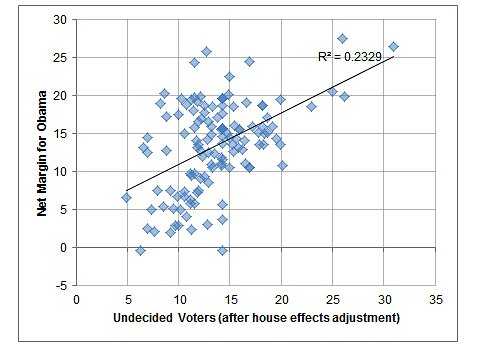 This does not mean that undecided voters who pick a candidate at the last minute, or even in the last month or two of an election, tend to break against the incumbent. That rule of thumb has been debunked.

But we aren’t at the last minute — we’re not even close to it, obviously. Much of the poor polling standing of candidates like Mr. McCotter reflect this name recognition gap, which will be closed if they win the Republican nomination. And even candidates like Mr. Romney aren’t yet universally recognized, including by some people who will vote next year.

So what we’ll do is do reserve 5 percentage points worth of undecided voters from each matchup, which is about the fraction of voters that remain undecided after the party conventions, at which point the candidates achieve essentially universal name recognition if they don’t have it already. The excess undecided voters, above the 5 percent threshold, are assumed to reflect a lack of early name recognition for the Republican candidates and five-sixths of them are assigned to the G.O.P. candidate, in accordance with the formula above.

If we re-run the numbers with this adjustment, we find that a few Republican candidates are essentially in a toss-up with Mr. Obama: Mr. Romney and Mr. Huckabee, for instance, trail him by just 2 percentage points each, while Mr. Giuliani is a point or so ahead of him. Others fare somewhat more poorly, however. Two of the more likely nominees, Rick Perry and Tim Pawlenty, trail him by 6 and 7 percentage points respectively, even after the name recognition adjustment. And several Republican candidates, like Michelle Bachmann, Newt Gingrich and Sarah Palin, trail him by double-digits. 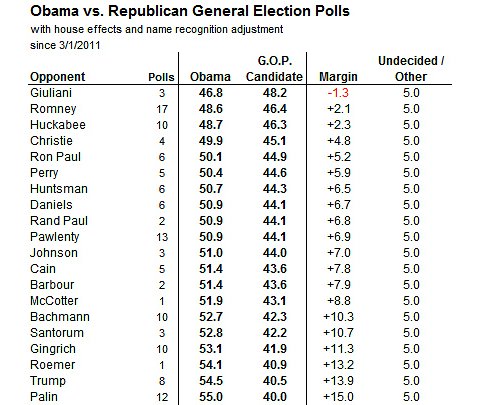 For what it’s worth, that squares with my educated guess about where the race stands. Economic performance has been poor enough, and economic forecasts have been downgraded enough, that I’d consider Mr. Obama to be in a rough toss-up against a strong and relatively moderate nominee like Mr. Romney. Meanwhile, I’d consider him to be a clear favorite against someone like Ms. Palin or Ms. Bachmann. And he’d be a slight favorite against a candidate like Mr. Pawlenty.

All of this is subject to change — a rising economic tide could sink all Republican boats, while continued sluggishness could lift them. And a few of the results in the table are unexpected — for example, Ron Paul does surprisingly well. But in general, you tend to see the more conservative candidates toward the bottom of the list and the more moderate ones toward the top.

I’ve been doing a bit of work on this issue — how much the ideological orientation of presidential candidates matters — and will present another approach to problem in another article that will be out soon. But I don’t think the substantial discrepancies in how the various Republican candidates poll against Mr. Obama should be neglected: there is clearly the chance that Republicans nominate someone who is too conservative to maximize their opportunity with swing voters. On the other hand, while incumbent presidents are very difficult to defeat, someone like Mr. Romney would probably compel a very close election unless the economic recovery picks up its pace next year.