As part of our coverage of the UK general election we examined the surge in momentum and jump in national polling numbers for the Liberal Democrats that began with their leader, Nick Clegg, scoring big in the first ever leaders’ debate of 15 April.

Several questions were outstanding. First, we wondered how would the UK’s electoral system respond to the emergence of a legitimate third party competitor? It turned out that even with a significant bump in national numbers, only a handfull of target seats would come into play, due to the electoral structure of the country.

In addition, the Liberal Democrats — among other third parties — often win seats over the course of several elections, becoming a “plausible” option in a constituency in one election, then pulling a plurality in the next election. This extra step — having first to achieve a threshold level of support before victory is likely — meant that the Lib Dems were not likely to win any seats beyond the 15 to 20 or so where they had a foothold already.

Lastly, the source of the newfound Lib Dem strength was relatively unclear, except that some demographic crosstabs and anecdotal evidence indicated that young voters were moving strongly to the Liberal Democrats. With regard to specific seats, it was not clear whether the national polling numbers were being drawn from an increased competitiveness in marginal seats where the Lib Dems had a chance to prevail, or from greater support in seats where the Lib Dems were either already power or did not have a serious chance to win.

The second question was one of selection bias. Both telephone polls and internet polls have particular biases and house effects associated with them, with telephone polls tending to exclude younger and poorer voters and internet polls leaving out older and less educated voters. Though the polling firms always try to adjust for these biases by weighing results based on age or newspaper readership, there is no way to account for voter sub-groups that are fully excluded.

The third and final question — one that we did not explicitly discuss ahead of time at FiveThirtyEight — is whether there was a “loud but flakey Lib Dem” effect at play, similar to the “shy Tory” problem of the 1990s. As put by Nate earlier this week, this “may not be the pollsters’ fault if voters changed or made up their mind while casting their ballots, as sometimes happens for third parties whose viability is questionable” (emphasis his).

We now have at least partial answers to these questions, which conspired to precipitate an election result where instead of seeing a long-awaited Lib Dem breakthrough we saw a rather demoralizing Lid Dem meltdown.

To begin with, the Liberal Democrats pulled 23.6 percent of the national vote, a mere 1.5 point increase over their 22.1 percent share from 2005. As we have learned from our projections, however, if those 450 thousand voters (1.5 percent of the total 2010 electorate) were gained in the right seats, they could flip perhaps 5 to 10 seats to the Liberals.

Unfortunately for Nick Clegg, there were too few new votes and they came in all the wrong places. 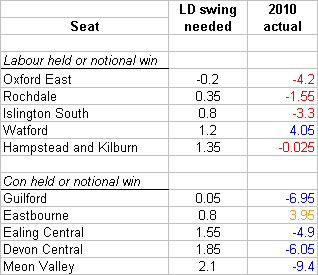 In these 10 key marginals, the Lib Dems lost in all but one — including the loss of one of their own seats to Labour (Rochdale, which had notionally moved to Labour during boundary review).

They succeeded in picking up Eastbourne from the Tories, seeing a good 4 point swing. Beyond this, however, success was hard to find. In Oxford East, Islington South and Hampstead and Kilburn — representative of seats across the country — the Lib Dems lost ground to Labour. While this might have been expected in some Scottish seats, or places where the Lib Dems are weak, to see a loss of vote share in key target seats is indeed quite bad.

In Watford it was a bit different — while the Liberal Democrats pulled a 4 percent swing against Labour, the Tories simply outstripped them, pulling out a 2 point victory.

Directly against the Conservatives, the Lib Dems again had a very rough time. Eastbourne was the only pickup from the Tories for the Lib Dems, while Cameron and co won grabbed 5 seats from the Lib Dems.

All told, the answers to our key questions seem to be as follows:

1. The electoral system did indeed hamper the Lib Dems, but not as much as their poor overall increase in votes. That said, the 2010 of 57 seats for 23.6 percent of the national vote is one of their worst in quite some time — compared to 62 seats for 22.5 in 2005 for example.

2.Internet pollsters overstated the Liberal Democrat share by about 5 points, whereas telephone pollsters produced figures that put the Lib Dems about 3 points too high. This suggests that selection bias from internet polling related to younger voters may be worth around 2 percent. Similarly, internet pollsters (excluding the dubious OnePoll) put Conservatives about 2 points low, consistent with the selection bias concerns we had.

3. Lastly, given that younger voters are the most volatile of all age groups, it is likely that there was some group of younger, less committed voters who responded strongly to polling but did not show up to vote. Similarly, it is possible that there was some sort of a response bias near the end of the campaign, where Lib Dem voters (empowered and excited for the first time in a while) were more likely to respond to pollsters than on average.