The UK’s plurality voting system has given the Liberal Democrats, among other non-regional third parties, trouble for quite some time.

As described by “Duverger’s law,” a well-regarded principle in political science, the system of single-member constituencies with plurality voting strongly promotes a two party system. As the theory goes, a third party can become competitive only if it begins with a reasonable strong regional base and can begin to erode the political space of one of the major parties, eventually replacing it as one of the “two” parties.

This system has thus far forced the Lib Dems to pursue a quite narrow strategy, where they focus on a limited number of seats, and leave most constituencies relatively uncontested. They have been most successful in seats that are effectively two-way (contested between the Lib Dems and one of the major parties, with little role for the second big party), profiting from tactical voting that is actually more related to the “real” competition between the Conservatives and Labour.

A second characteristic of the Liberal Democrats — as well as the SNP, PC and other third parties — is that they tend to win seats not in a single election cycle, but after first reaching a critical threshold of support an election before. While still losing to the major party in the constituency, this baseline of support provides the “plausibility” factor that can turn tactical and ideological voters to the party. This threshold figure varies depending on the specifics of the constituency, such as three way races versus four way races, but tends to be about 30 percent of the vote. 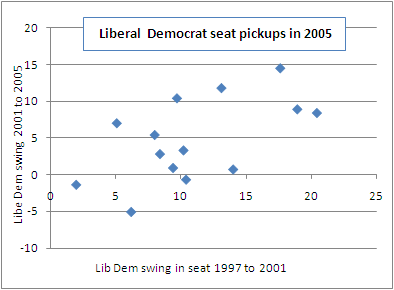 In nearly every case, the 2001 election saw a swing to the Lib Dems, usually pulling votes from both Labour and the Tories. And, the stronger that swing was in 2001, the bigger the swing they experienced in 2005. Similarly, many of the seats in which they made progress but did not win in 2005 are now key pickup opportunities for the Lib Dems in 2010.

However, as discussed in part two, there are a limited number of seats where the Lib Dems are in a “threshold” position — indeed, our seat projection model predicts that even if the Liberal Democrats score second in the national popular vote (they are currently on 28.7 percent to Labour’s 26.3), they stand to pick up only about 60 seats.

However, the recent polling renaissance of the Liberal Democrats and overall public dissatisfaction with Labour and ambivalence towards the Conservatives among swing voters has opened a “Duverger” opportunity for the Lib Dems to shake up the political system.

In practical terms, their stronger political position means that they will be able to switch their focus towards three way seats where they have the edge over the Conservatives and Lab-Con marginals where they have not previously had much of a role. Although they will likely only moderately improve on their 2005 MP haul in this election cycle as compared to their strong national popularity, the seeds may be sown for future improvements — if they can secure a strong position in key marginals for the next election, even if they lose them this time around.

In broader terms, if Nick Clegg and company play their cards correctly, they may have the chance to avenge the Liberals of the early 20th century, who were displaced by the Labour movement as the center-left counterpart to the Conservatives in the UK two-party political spectrum.

However, this would require a fundamental shift in the priorities of the party, which has been obsessed with electoral reform since it became clear their dislodgment from the top by Labour in 1920s was going to stick. If they consider that regaining the mantle of the center-left over the next two to three elections is a real possibility, then why not keep plurality voting in order to keep Labour locked out?

It is perhaps a matter of ambition versus pragmatism. Pushed to the margins of power for nearly a century, the Liberals and their progeny the Liberal Democrats perhaps do not believe they can displace Labour as the voice of the center-left. In addition, there is a significant group among the left in Britain who are supporters of electoral reform for ideological reasons rather than for political expediency.

Nonetheless, if the Liberal Democrats want to govern at some point – and it seems that Nick Clegg sees it this way – a simple reform to the electoral system that will bring modest returns to the party at best may not be they way to go. Perhaps they should set their sights on knocking Labour out as much as they can this election — effectively conceding 2010 to the Tories, but building their chances for long term success in the next decades.