Yesterday we looked at the the UK Liberal Democrats’ rapid improvement in momentum, legitimacy and polling numbers in the wake of last week’s leaders debate, concluding that the final impact of this rally will be largely dependent on where it is focused.

Now then, onto the seats themselves. Regardless of whether the Liberal Democrats perform better or worse than their national numbers — currently about 6.5 percent swing against Labour and 3 percent swing from the Conservatives– in target marginals, a major concern is how relatively scarce their targets are, particularly targets that take advantage of what looks to be a a weakened Labour party.

Looking at the first 42 Labour target seats for the Liberal Democrats (0-10 point swing, or 0 – 20 point net improvement for the Lib Dems) illustrates exactly how hard a road they have to pick up a significant number of seats.

Look for example at the 5th and 6th target seats on their list, first Watford and then Hampstead & Killburn. Less than a 2 point swing from Labour would deliver the seat to the Liberal Democrats, assuming that the Conservative share does not change. However, the Conservatives are poised to pull a swing of 3-5 points from Labour as well, possibly eclipsing the Lib Dem gains. 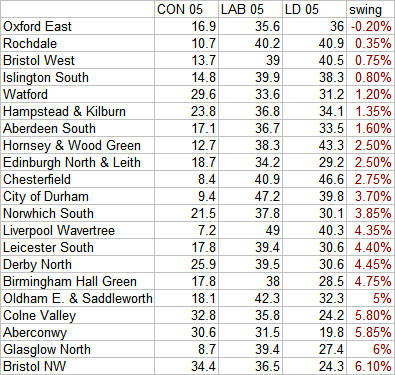 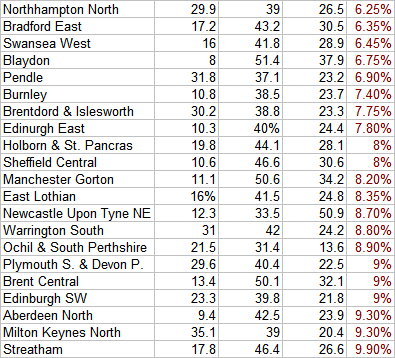 Furthermore, by the time you are halfway down the list, seats come into focus where the Liberal Democrats are currently a distant third in what really are Conservative-Labour marginals. It is possible that the Liberal Democrats may overtake both parties and win, but its as likely that their increased vote, coming at the expense of Labour, might well give the seats to the Conservatives.

Looking in the other direction, the Liberal Democrats have a significant number of potential Tory-held targets, including quite a number where Labour support is quite low.

This leads to an important point about about Liberal Democratic strength currently; overall, the Lib Dems tend to perform best in seats that are de facto 2-way,. Since the 1990s the Liberals have benefited from tactical voting, not just of Labour supporters against the Conservatives but also of Conservatives against Labour. Indeed, most seats that the Lib Dems currently hold have played out this way. 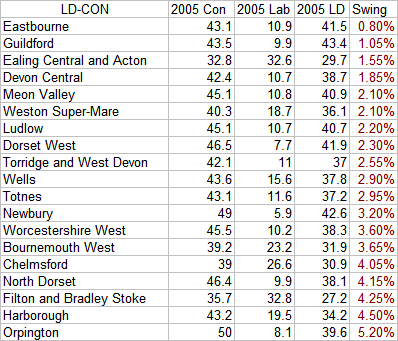 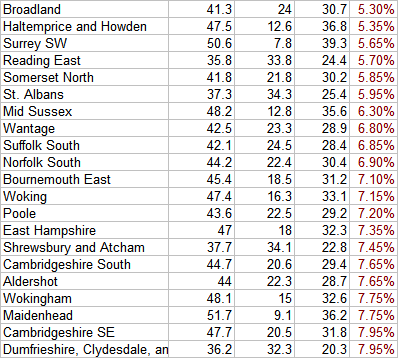 However, with Conservatives expected to improve on their 2005 totals and the Liberal Democrats expected to do the same, the question will be where the vote shifts will come from. In cases like Eastbourne and Guilford, there is little space left for tactical voting by Labour supporters.

However, the current dynamic could switch things around for the Lib Dems in Conservative-held marginals: rather than focusing on 2-way races where there is little additional tactical support to be gained, the Liberals can focus on 3-way races where Labour supporters, seeing their national numbers plummet, will go to the Lib Dems as a more palatable option.

Depending on how fervently they were to make this leap, it could turn out quite well for the Lib Dems, if the group of Labour defectors is big enough, or alternatively for the Tories, if the movement is large enough to weaken the Labour share but not enough to flip it for the Liberal Democrats.