Last Thursday, the leaders of the three large UK political parties engaged in the country’s first ever televised election debate. While most policy questions were left answered much as they had been before the event, the leader of third party Liberal Democrats, Nick Clegg, dazzled most observers with an especially strong performance.

That the Lib Dems were included on an equal footing with Labour and the Conservatives on a nationally televised debate was important in and of itself, but Clegg managed to convince many voters that the Liberal Democrats are more than a perennial protest caucus who will never hold more than 5 to 10 percent of seats in Parliament.

YouGov snap polling from Friday had the Liberal Democrats surging 7 points following the debate, from 22 to 29 percent — trailing Labour by one and the Tories by four. ComRes showed a similar bounce from 21 to 29 percent; just two points behind the Conservatives and in this case leading Labour by a pair. ICM polling in the Guardian confirmed the national trend today, indicating a 10 point bump that puts the Lib Dems in second place nationally with 30 percent, with 33 to the Tories and 28 to Labour.

Several readers have written in, asking whether this Lib Dem surge will translate into big gains on Election Day for Nick Clegg, Vince Cable and company. The short answer is: Unlikely.

The longer answer: It depends.

Contending with an electoral system that tends to crowd out third parties, the Liberal Democrats have had to devote their energy to winning and defending a relatively small number of seats as compared to their support nationally. In contrast, the Labour and Conservative parties, while also focusing on winnable marginals as not to waste resources and votes, have far more leeway in terms of targeting more distant opportunities to flip seats.

All three parties have learned to focus their efforts in seats they can win and spend less time, effort and money on those they do not think they can. 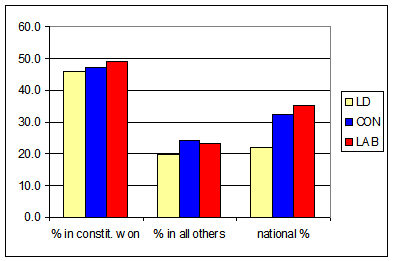 Looking at 2005 numbers, the contrast in the parties average vote shares between constituencies they win and those they do not is quite dramatic. In seats where the Lib Dems were victorious, they won 46.1 percent of the vote — similar to the other parties. 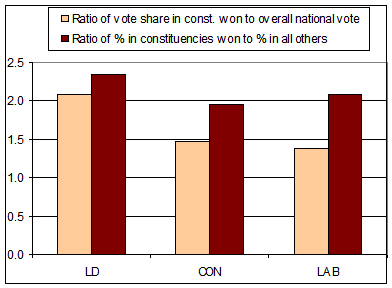 In fact, the Liberal Democrats were the most effective at maximizing their vote in winning constituencies, earning more than double their national share in seats they won.

However, in terms of vote efficiency, the Lib Dems were the least effective, spending far more votes to win each seat than the Conservatives or Labour. Among the traditional top two parties, Labour was better at earning votes in seats they could win, while winning less in losing constituencies than the Conservatives.

For 2010, this means that even with a surge of 10-15 percentage points nationally, the Liberal Democrats may mean a modest number of pickup chances. Earning an average of 19.6 percent in 2005 in seats that they do not already hold, the swing would have to be focused in constituencies where 30 to 35 percent can win for the Lib Dems, rather than the 40 to 50 percent that they usually need.

If the bounce simply manifests in a massive burst of support in seats that the Lib Dems already hold, along with a few nearby marginals, the end result could be a pickup of a modest 10 to 20 seats. Similarly, if it comes from alienated opposition voters in safe Labour or Tory seats (tactical/protest voters who would not vote Lib Dem over their own party), again the Lib Dem share of MPs will not budge very much.

All told, Nick Clegg and his cadre will have to play very calculated offense with the rise in support they have gotten. If they can start to turn more races into three-way affairs, and pull disaffected voters from both the Conservatives and Labour, this could get quite interesting.

In Part 2, we will look at current target seats for the Liberal Democrats and where they may become competitive where they were not previously.